This week Blackpool Pleasure Beach announced that free entry to the park will soon be a thing of the past. They plan to introduce a £20 admission charge which will include unlimited rides. However that means a family of four will pay £80 regardless of whether some family members will not want to ride. A family trip with grandparents will probably mean that a decision has to be taken whether to split up for a while or stay out of the park altogether. 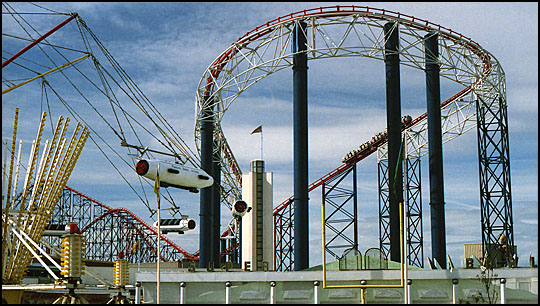 I can't help feeling that since the passing of Geoff Thompson, the park has become increasingly anonymous and detached from reality. Almost every night Mr Thompson would be mentioned in the local paper, getting involved in many diverse activities in the town and coming across as someone genuinely concerned with the growth and reputation of Blackpool as a whole. There has always been an acknowledgement that the park was there to make money. The TV fly-on-the-wall series showed that quite clearly, but it was balanced with a personality and a face that was seldom seen in public without a smile.

Will I pay £20 for the privilege of going in to take photos as I have been used to doing over the years. Well there's nothing in me at the moment even saying "Go on... you know you want to..."