Here's an entry to tie together a couple of previous themes. 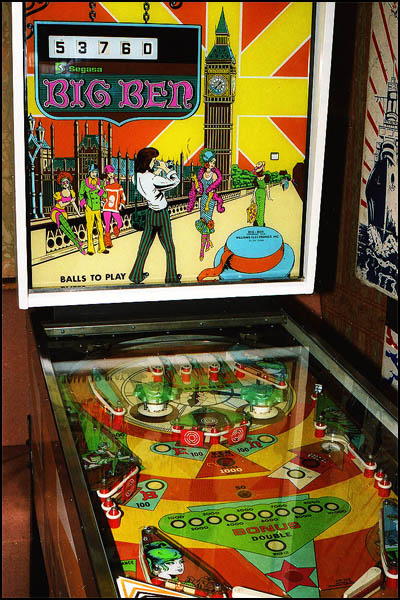 We've had a few entries, with more to come, of our 1995 London Trip and I also mentioned helping the Pinball Owners' Association put together a pinball convention in the same year. This Big Ben pinball links them nicely as the photo was taken at the convention and features the famous clock tower in London. It is, of course, the bell that tolls the hour that is Big Ben, not the tower itself, which is St Stephen's Tower.

The pinball was from the pre-electronic days of pinball, so is a 1970s game and was in tip top condition having had a repaint and an excellent restoration. Sound effects were provided by a triple chime bar, sounding a bit like a doorbell but with different musical notes for the 1000s, 100s, and 10s reels. In fact later that year when we were restoring our own Lucky Ace pinball of 1976, we replaced the missing chime mechanism with a standard "Avon Calling" doorbell chime bars!