We were in Blackpool this morning to meet up with David and Jeannie for breakfast and afterwards whilst the ladies went off shopping, David and I had a wander round the antiques market in the Winter Gardens. I came across a stall selling old postcards for 25p each and had a brief rummage, coming up with a couple of postcards one of which was this one. 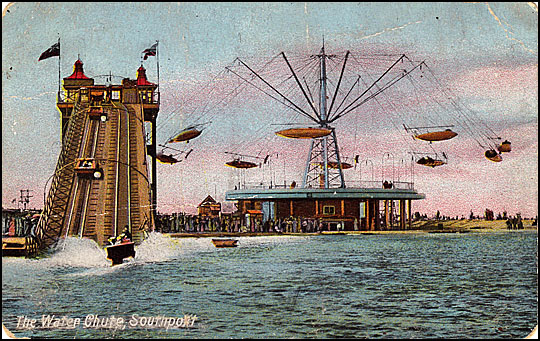 It shows Sir Hiram Maxim's Flying Machine, one of three such machines he produced in the early days of the 20th Century to stimulate public interest in flight, which was very much in its early infancy at the time. The Flying Machine shown was at Southport, standing next to the Water Shute that gives the postcard its caption. It has a number of large open rowing boats suspended from a spider-like arrangement of arms and steel bracing cables which when spinning would cause the boats to fly out sideways from the platform over which they would sit when stationary, this "flight" powered by centrifugal force. The other two Flying Machines were at London and Blackpool. 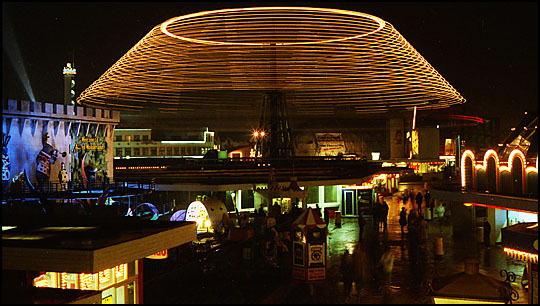 The Blackpool Flying Machine still exists of course and has been a feature and landmark of Blackpool Pleasure Beach since 1904. I took this photograph in the mid to late 1990s when the motor powering the Flying Machine - still the 1904 original - had been opened up to public viewing by knocking a wall through and installing a large glass window.

Sir Hiram Maxim was an inventor and made his fortune selling the Maxim machine gun which was used extensively in the first years of World War One. Flying was his own personal ambition and enthusiasm. He turned his hand to a number of varied inventions though, one being an inhaler for asthmatics, an example of which is exhibited in the Science Museum in London.