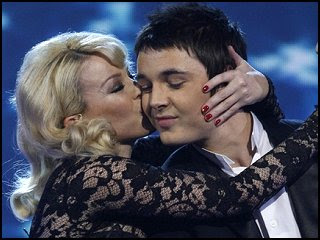 Well, I'll tell you what - it would have brought a smile to my face!

Kylie joins the X-Factor to sing a duet with Leon, Rhydian does a (slightly more dodgy) duet with Katherine Jenkins and Jason Donovan comes on to ogle the prettier half of Same Difference.

I've been saying for a few weeks that Leon could win (honest!) and on Saturday night he came through, was presented with a copy of his new CD single and now has a crack at the Christmas No.1 slot.

Personally I used to enjoy all the build up to the race for the No.1 Christmas slot and the X-Factor has dominated it for the past few years. However, were any of the final 12 strong enough to have it sewn up? I've doubted it but we'll know in a week!

Maybe if he'd done Agadoo instead of that dreary ballad... Which are the most popular Christmas singles? Slade of course, Wizzard and the multi-starred Feed The World which makes it because of the last sing-a-long bit!

Come on today's singers - be like Santa and get some welly into Christmas!
Posted by John Burke at 08:05