Christmas "That'll Be The Day" 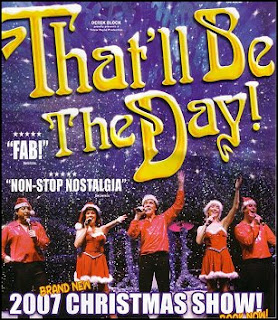 A fabulous night out last night as we went to see the Christmas version of Trevor Payne's That'll Be The Day at the Opera House, Blackpool.

It's been touring the country for an incredible 20 years and I think we started going to see it every opportunity we could get in the late 1980s. Every year there's something new in the show.

Last night, being the Christmas version we had lots of Christmas songs of course. All the other songs they included had been December hits from 1960 onwards. We had Neil Sedaka's Calendar Girl, Billy J Kramer's Little Children and many more but it was the Christmas songs that had us joining in. We dabba-dabba-dummed to Stop The Cavalry and gave it some welly when they decided the audience should sing a verse of White Christmas!

I came away with a souvenir DVD of the show which looks back over the 20 years of the show. I'm going to enjoy that!
Posted by John Burke at 10:14