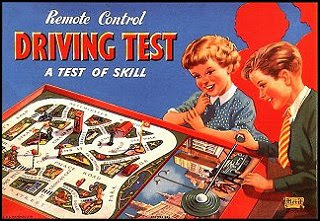 It must be a time for toys at Christmas and after mentioning the Matchbox Majors yesterday I've also had some recent correspondence with a chap in Lima in Peru who had come across one of these Merit Driving Test toys that I had as a child in the 1950s.

I feature it on one of the pages in my Notsalgia web site.

It worked by using a magnet under the playfield which was attached to a scissor arrangement, like those litter grabbing things, which matched and exaggerated the movement of the lever, which was itself modelled on cars' gear levers of the time.

You had to move a tiny model car or motor bike around a map of streets on the playfield and I remember it as being a load of fun!

How one came to be found in Peru I've no idea but the mechanism has been lost and David who wrote to me was looking for help with how to replace it. I've sent him some drawings of how I remember it from a 3-year-old's memory but I don't think I'm all that much wrong and hopefully he'll be able to work out a way of doing it.
Posted by John Burke at 07:44