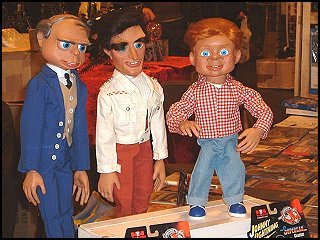 I can't remember just where now, but the other day I was talking to someone about Gerry Anderson shows and about Supercar in particular.

They said they knew someone who looked and spoke just like Dr Beaker, the character on the left.

First broadcast in early 1961 Supercar was about a futuristic combination car, submarine, hovercraft and aircraft. Designed and built by Professor Popkiss and Dr Beaker and piloted by Mike Mercury, the chap in the middle, it's first mission was to rescue the orphan Jimmy Gibson on the right of the photo.

Dr Beaker was a charicature of an English academic, whose favourite phrase was "Satisfactory...most satisfactory..."

I always maintain you can know someone's age by showing them photos of Gerry Anderson shows...
Posted by John Burke at 12:51