We had a short run out to Bygone Times, an old mill converted to an antiques centre with three warehouses filled with assorted old stuff of all sizes. Bygone Times, in bygone times, was bigger and probably better. A lot of the fun stuff, that they knew would never sell but was there to bring people in, has disappeared and it is now just like any other antiques warehouse. If you like antiques though it's still a great place to go but I used to enjoy all the huge model aircraft, the old pinball machines totally beyond any attempts at restoration and the old architectural antiques - bar fittings, dentist chairs and so on, that used to litter the place to great effect! 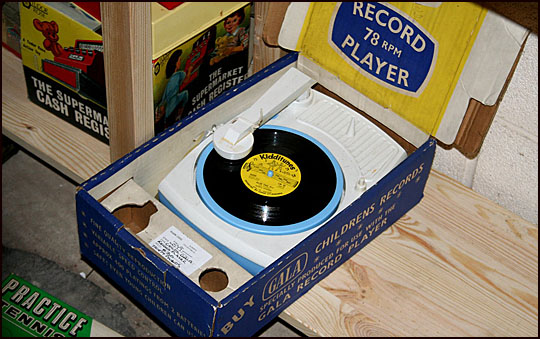 We were walking around and Fran said "Oh there's a record player for you there!" It was a "toy" 78rpm record player and whilst I resisted purchasing it did make me reflect that ever since CD players came out there has been no such thing as a toy record player or any other sort of music playing equipment. There were toy cassette players that were aimed at children but these days with iPods and MP3 players which are so small anyway, there's no point in producing them just for kids.

I think there was a Barbie recently with an MP3 player built in but all kids have a mobile phone these days and they can play music now. It's not the same is it? What's the last kid's song you can remember? They are few and far between now aren't they? Vic Reeve's Shaun the Sheep theme tune may have been the latest but before that? Where's Max Bygraves when you need him?