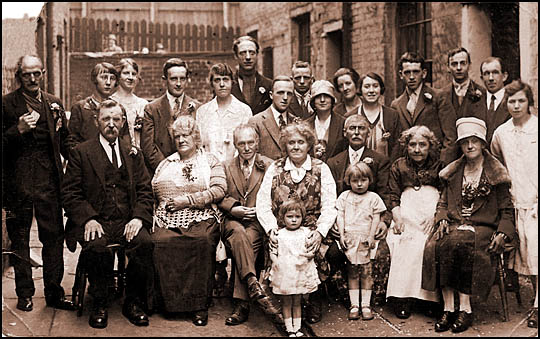 Along similar lines to the last post, except this is an example of street photography from Rochdale, which in the time of the photograph, was a thriving mill town in Lancashire.

Photographers would go round offering to photograph everybody in the street. They didn't spend as much on film or time spent going and hoped to sell a good number of prints from the same negative.

In this photo, again from Fran's collection, her great uncle Clifford is standing just to the right and slightly in front of the tall chap. To the right and behind is Wilson Perks, Fran's grandfather, and then standing next to Clifford is his wife, Edith, with her sister, Ellen next to her. There's a lot of photos in Fran's collection but as with many such family collections there are no dates or names and the only people we know are the ones in living memory.