A lot of people ask me how long I've been playing guitar and I can nail it down to the day. 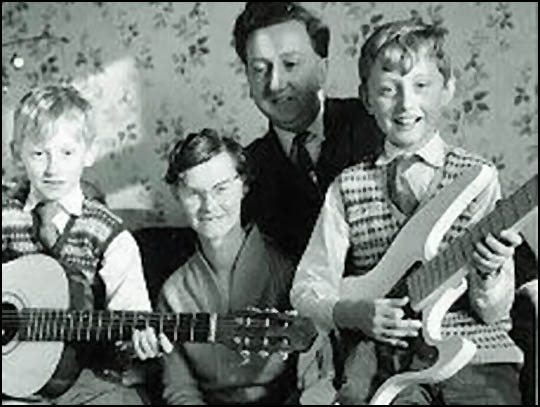 This is Christmas Day 1965. I was 11 and am on the right of the photograph with my parents and brother Frank on the left. The electric guitar was made by my Dad from scratch. The acoustic guitar had been rescued from someone's coal bunker and Dad measured it to provide the details to build the electric guitar. Consequently it has all the parts of an acoustic and the neck is shorter than an electric should be but to our eyes at that time, it was wonderful! The frets were actually made from Hornby Dublo model railway lines and instead of a standard jack socket it had a television aerial socket but these were the two guitars I learned to play on. Explains a lot... (just thought I'd get it in first...)

Return to Family Memories Index
Posted by John Burke at 08:57