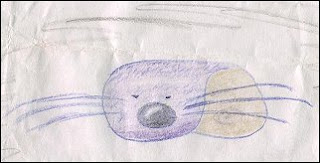 Now if you've been following this blog you'll know all about woggles by now, but if not start by having a look at the entry More from the Ladies over the Water and then have a look at Marlene's blog entry The Story of a Woggle. The sound of intrepid woggle hunting by myself and Marlene way back in 1997 can be heard here. So now that brings all the links together!

And now, children, for the first time in print, on screen or even in thought - the very first Woggle Story:

Wally the woggle lived in a wet patch of grass near the edge of the school playing field. Living in the middle of a playing field was a risky business for a woggle. There were hordes of humans sometimes with studded boots - his Great Uncle Will had gone that way and it hadn't been a pleasant sight! There had also been the time when a woman had slipped on the grass and sat on Aunty Wendy. There hadn't been a lot left of her either. Aunty Wendy that is... So Wally lived close by the hedge where careless feet wouldn't catch him. Not that he was any sort of coward, he was always quick to point out. In his own words, "I'm a woggle who lives close to the edge..."

Wally sighed. The problem was that humans found it hard to see woggles. They could only see them out of the corner of their eyes because being looked at directly makes a woggle so nervous they shiver. At exactly the frequency that human eyes see straight through. So looking directly at a woggle makes them invisible. That's the danger of being a woggle. People step on invisible things...

Wally decided he would nip over to the school and find the saucer of milk that he knew would be left out for the school cat. "Nip" over might not be quite the exact word to use really. Woggles don't move fast. No legs you see. Well... no legs you can't see because the woggle would disappear if you looked at him anyway. If you see what I mean!

Movement for Wally was a sort of rolling awkward movement, stretching out his normally hunched body at the front, then letting the back part slide along to catch up as his back arched again.
"And that," thought Wally, "will be bloody painful once I reach that concrete playground!" Poor Wally...