More from the Ladies over the Water 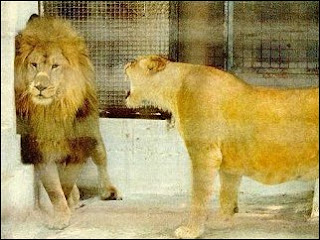 I've no idea whose this photo is - it was sent by Amanda way back in July 2002, captioned: "Proof that there is marriage in the animal kingdom"...

I've been skimming back through my own web pages of old emails and photos looking for something. It's ten years since Marlene came over for a visit on her way to Canada and during that time we plagued Evy by talking about having seen a load of woggles...

We had - they were round the ties of a coach-load of cubs and scouts on a motorway service station but Evy thought we were talking about some kind of animal and the joke just ran and ran!

Anyway, Marlene had emailed "... ten years since we came to Canada. Can hardly believe it." Evy replied:
"Happy anniversary sis. I remember the day well. There is only one thing I don't remember. I forget what a woggle is!!!"

Tsk! Evy, they have purple fur, live in tall grass, do good turns and drink milk very sloppily which runs down their long whiskers! I can't find the sketch I did...
Posted by John Burke at 14:00