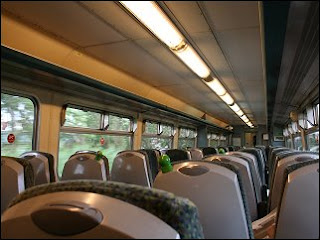 Phew! I was in Sheffield yesterday at the AoC NILTA CIS Conference for managers of College Information Services.

If you are reading this from the UK, you will have seen the news images of the horrendous flooding. The rain was hammering on the windows and skylights of the hotel venue all day without any let-up.

Several of us were travelling back west from Sheffield and we got to a very crowded railway station to see rows of cancelled trains on the announcements board. Luckily we managed to get onto a train heading for Manchester, but it was a very slow journey home. The knock-on effects of so many cancelled trains was having its effect on trains all over the country and the second stage from Manchester to Preston was a journey of long waits before approaching stations.

Ironically, my final train from Preston to Blackpool was almost empty as can be seen above and it reached Blackpool as the sun came out and I could hardly believe how bad it had been until I got home 20 minutes later and saw the TV coverage.

There must have been a lot of people unable to get home - nothing was travelling south, we saw lots of very agitated people talking into mobile phones and huge queues of people at Sheffield forming in front of any railway official they could find.

For all that the conference seemed to go quite well. I delivered two workshops, one with my colleague Andrew Stewart on the use of Web 2.0 social software, concentrating on Wikis. Only a couple of the delegates in the session had tried it but we got some quite good discussion and ideas from them.

My other session was on Risk Management and that too stimulated a lot of interest.
Posted by John Burke at 08:38