I've had an email from someone who had been looking at my web pages on 78rpm Records. It said:

Hello John,
I would be interested to find out if you know anything about a 12" record I have, it plays like a 78, it is the speech of H.M. King George V opening ceremony of the Tyne bridge Newcastle, dated 10th (October) 1928 and, on the reverse side is the address of welcome to King George V by the town clerk ,I would be grateful of any knowledge you may have about this many thanks Ellie Reid

The record is shown above right and is one of a number of 78rpm records commemorating speeches and events. The Tyne Bridge was a marvel of its age, the BBC have a number of short silent films downloadable from this page including the construction (health & safety? What's that?) and one film of the Royal Opening Ceremony.

As with all records of this type, the value depends on completeness (it had its own designed sleeve) and in the end it is worth whatever someone would give for it! 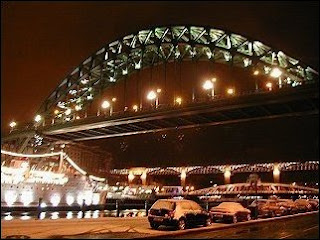 Thanks Ellie for a fascinating journey through a few web pages though!

Were any readers at the ceremony or can you remember the bridge being built? It's almost 80 years ago so this might be unlikely, but is there anyone whose father or grandfather worked on it? Or does the Tyne Bridge have a fond place in your heart?

Send me some memories either by email or by clicking to add a comment to this blog entry!

The photograph right kicks us off - it was the first time I saw the Tyne Bridge, January 2003 and it had snowed. I'd just been appointed to JISC infoNet, an advisory service for colleges and universities that is hosted by the University of Northumbria at Newcastle and was still working my notice period when I came across the country this night for a meeting the following day.
Posted by John Burke at 15:48