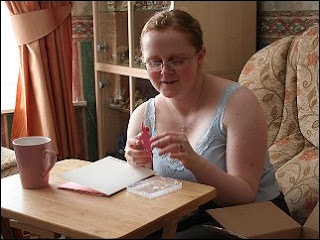 It would make Dawn Bibby proud...

The house has turned into a craft production line with Gill's wedding Order of Service churning out at the rate of knots.

I've been drafted to do any of the computer bits and my printer has run out of magenta ink at least 20 times during the printing of the Order of Service, Place Names, Table Maps, Invites and so on.

I had to buy a long-arm stapler to do the Order of Service and the ladies of the household are now sticking fancy bits to the front of the cards. Gill moaned that the new stapler came without staples but I had a supply, bought in a moment of extravagence sometime in the 1970s before we even moved to Blackpool or had a daughter at all... 5000 staples, size 56, of which about 4900 still reside in the box despite Gill's best efforts - sheesh, she's refilled the stapler twice! In a single day!!! At that rate my great-grandchildren might need to buy another box...

There's only 5000 in the box you know! And it was expensive! One pound and fifty pence!
Posted by John Burke at 15:38