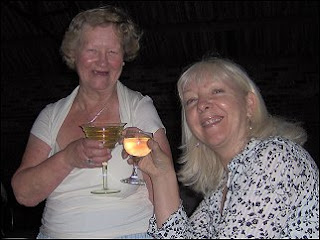 Last night David and I played at Larbreck Hall Caravan Park. Bob had a prior engagement with The Old School Band but we gave them a good night of music and they got up and filled the dance floor!

We have played there several years - the first one at Larbreck was for the Queen's Golden Jubilee in 2002 - and we usually do an outdoor gig. The weather looked a little suspect yesterday so we were inside a huge barn and with a few pallets, boarded over for a stage and a couple of caravans as a backdrop, we added a few lights and it made for a good atmosphere!

Since Dad died in 2004, Mum (pictured with the band's organiser and fixit, Jeannie) has organised an annual charity event in benefit of MacMillan Cancer Support. The afternoon is spent on the lawn at the side of her caravan, with piles of jumble, bric-a-brac and competitions - a whisky wall, a photo caption competition, raffles, tombola, etc.

Fran spent most of the weekend, making mix and baking scones for cream teas or just for selling. At least 6 dozen went through the oven! 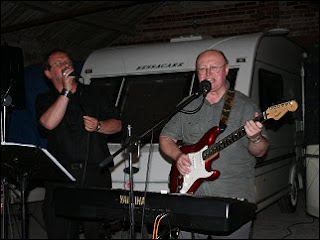 The residents and holiday makers on the caravan site and various family members raised over £500 for the charity. During the gig we auctioned a couple of bottles of whisky and a large dinner service that someone had donated and until Mum does her reckoning today I'm not sure just what the final total will be.

It was strange to think that our next gig will be a spot at the reception of Gill's wedding next week! When we played "Constantly" which is destined to be the married couple's first dance together, both Fran and sister-in-law Joyce had tears streaming down their cheeks! As David said, "I didn't think we were that bad..."
Posted by John Burke at 10:19