Concluding Our Day in Athens

Tuesday 16 June 2015. The coach arrives at the Acropolis to pick us up. Space is at a premium here. Coaches are allowed to park for only ten minutes so anyone arriving back before that should not get worried at the absence of their bus. 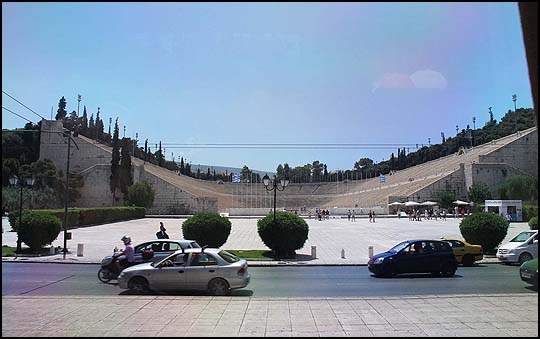 We now have a while on the coach as it does a sight-seeing tour of Athens. I have to conclude that apart from the ones we have already seen, there are not a lot of sights of universal interest... This is the Olympics Stadium for track and field events, others are scattered here and there for specific events. 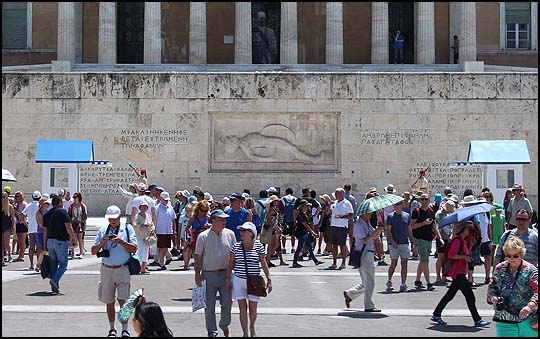 The Grave of The Unknown Soldier has a Guard of Honour posted to either side. The Changing of The Guard had just taken place but we did catch a glimpse of the just-relieved Guard Party marching away with the distinctive Greek slow march. 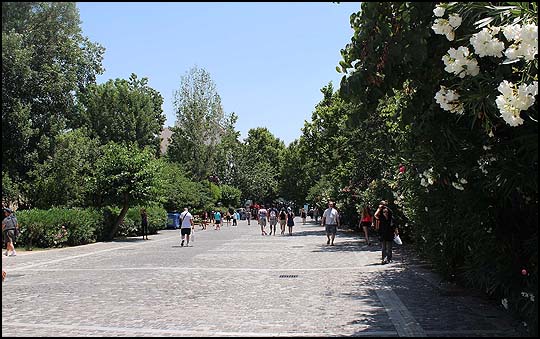 After half an hour that was more enjoyable for being able to sit and rest the feet than for the sights - large modern boring buildings I can take or leave even if they house the government or a university - we arrive at a rather familiar road... 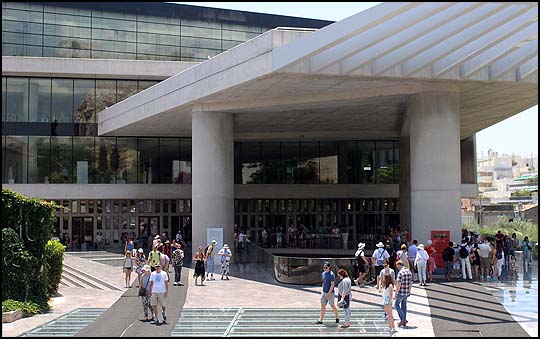 This is where we were headed: the new Acropolis Museum. It is opposite the Theatre of Dionysus that we walked down to earlier this morning and seen in the previous entry. 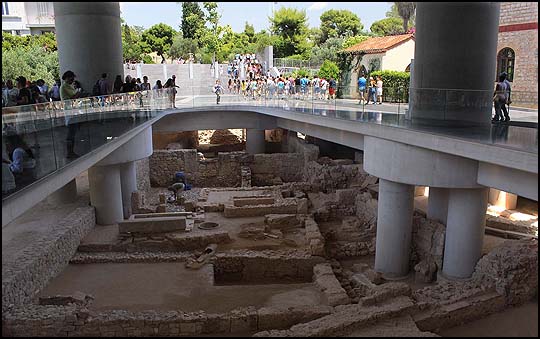 In the space in front of the museum, the courtyard is opened to reveal the archaeology underneath. The contrast of light levels meant I had to create this from two photographs taken from the same place. One exposed for the shadowed area below today's ground level and one for the top level in bright sunlight. Once inside the museum we can't wait to get away from our guide. She said we had to keep together until we were inside but should have mentioned that there were toilets once through the turnstile as well as just outside it. A few disappear into the toilets and we were 20 minutes waiting and had scattered about somewhat. Once through and into the museum she again starts talking unnecessarily. She actually starts reading out the labels from some of the exhibits... We leave her only 30 yards from the entrance.

This is the third and top floor which has a view towards the Acropolis opposite. The windows aren't dirty - it's the polarising filter on my lens that has brought out all the stress patterns that are normally invisible. 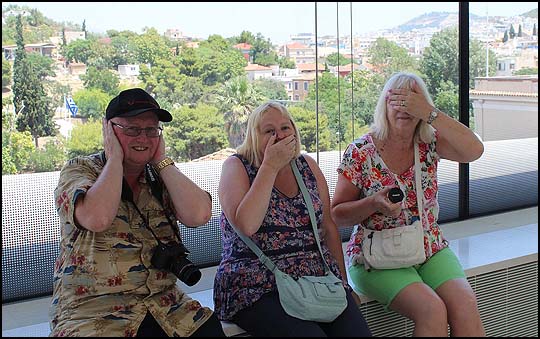 I'm not sure we have the order right here, but you get the drift... 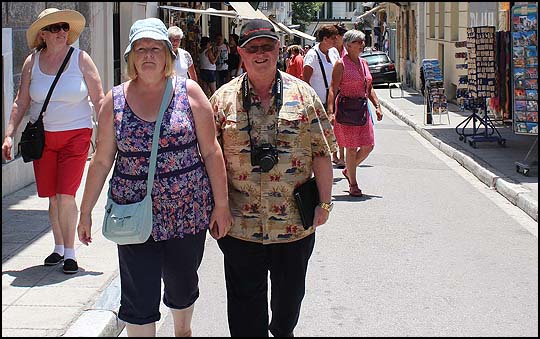 Having looked at a few exhibits, we decide we are more interested in food and drink and walk back down towards the exit, passing our party who are just climbing from the first to the second floor! Good luck trying to find time for lunch, guys... 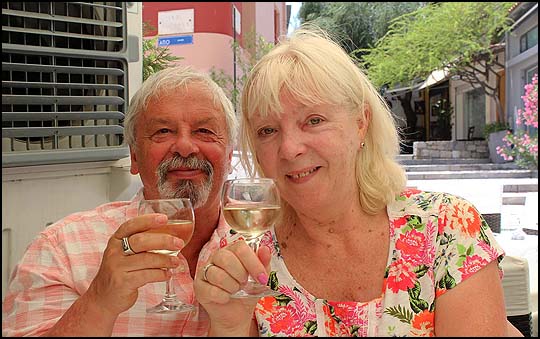 We walk down to the narrow streets and restaurants of a part of Athens called Plaka. It is almost like an old town. Not without a little difficulty, we find a taverna where we can have a snack and a carafe of wine. A chap is playing guitar and crooning and we nod our appreciation to him as we pass on the way to our table which is outdoors and sheltered from the sun by a canopy. Even better, that's an air-conditioning unit next to David! 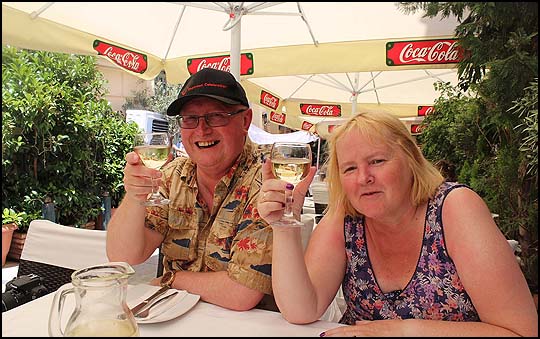 This is the life. Sitting outside a cafe even in warm weather is no fun in England now because all the smokers have to sit outside and you have to put up with foul-smelling smoke in what should be fresh air. It can be as bad in other countries, but funnily enough I don't remember seeing all that many smokers in cafes during the week. 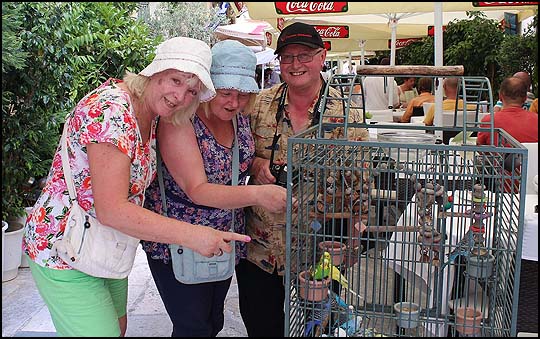 Right at the side of our table was a large cage with ten or twelve budgerigars tweeting away. I did wonder when the waiter came whether to point and say "That one..." but instead Fran and David ordered toasted sandwiches and chips and Jeannie and I agreed to share a Greek salad. 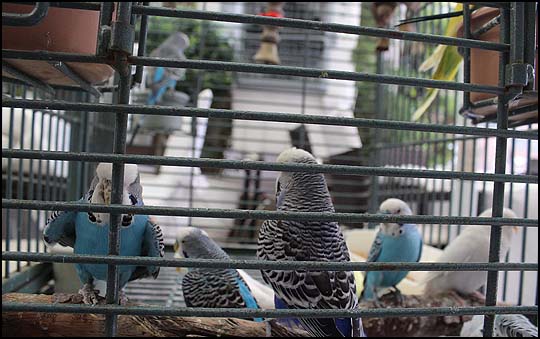 Not much on one of these drumsticks, come to think of it... The food was delicious. What is it about salads in Greece that taste so much better than those in England? Apart from the natural oil on them, the absence of mayo and tomatoes ripened by the sun instead of sprayed chemicals that is...? These days in England you don't even get lettuce - it's all stuff that in past years would have been labelled grass... Crunch with no taste does not a salad make... 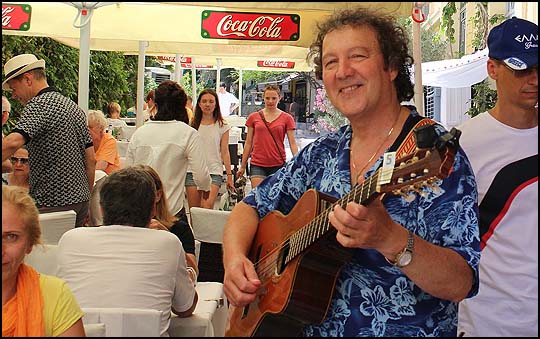 The entertainment. I'm not sure of the significance of the number 5 on his guitar unless they were auditioning and number 6 was waiting for his turn... 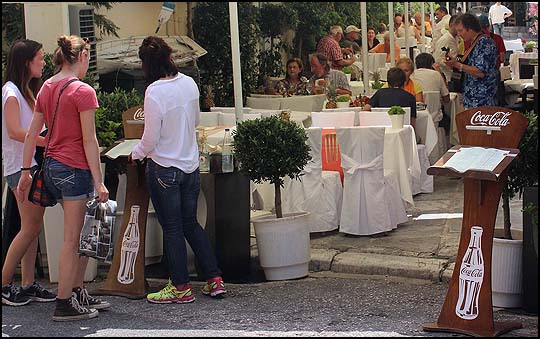 I tried out my Greek on the young lady as we left. "Efcharisto!" I said cheerily.
"Oh!" she said in surprise, "Almost Greek..." 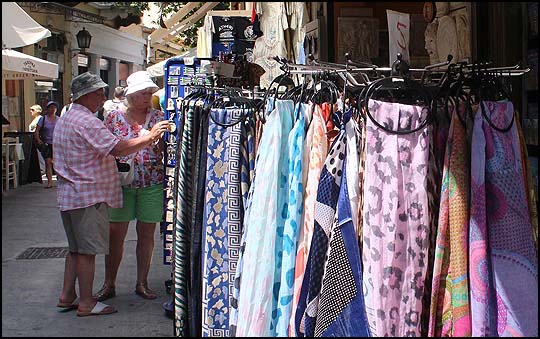 And on into the shopping streets with their colour and crowds, the smell of perfumes, garlic from the cafes, the occasional whiff of exhaust fumes as something ancient and fuming splutters past. 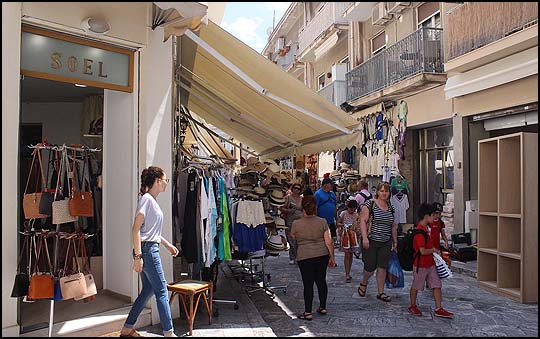 Miss Franny - as an ex-leather worker - always likes to get a fix of the smell of leather products! She casts an expert eye over pieces and comments favourably or otherwise with phrases like "That's a good piece of leather!" or occasionally, "That's not been fixed properly..." 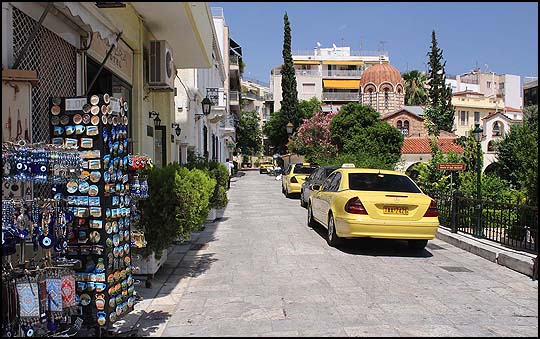 An almost deserted side street with a tiny church on the right. Not all of those fridge magnets on the stand stayed in Athens at the end of the day... It really amazes me that our suitcases at the end of the week don't attach themselves to the side of the ship as the crew try to take them off! On the other side of the street to the fridge magnets was another bit of ancient Greece, clearly showing how the dust of centuries has built up the present day ground level. 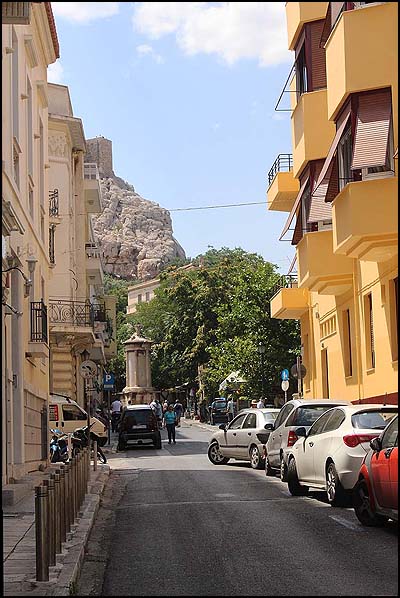 The high rocky outcrop of the Acropolis at the end of the street. 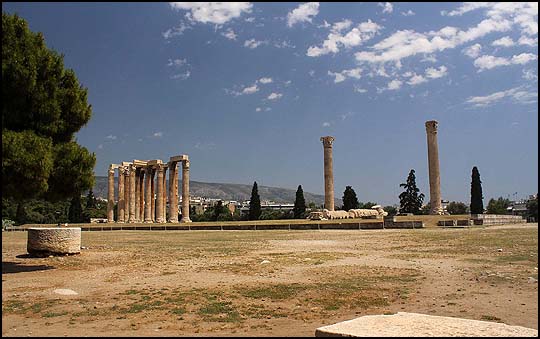 David and I both wanted a chance to see and take photos of the Temple of Olympian Zeus. We had glimpsed it on the opposite side of the street when the bus dropped us off and as we were due to meet the bus again in the same place, we agreed to leave the ladies shopping and we crossed the busy road. 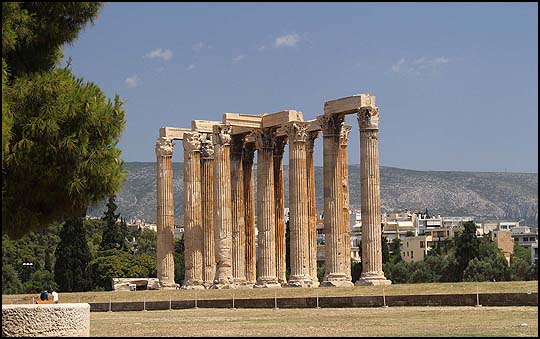 Construction began in the 6th century BC during the rule of the Athenian tyrants, who envisaged building the greatest temple in the ancient world, but it was not completed until the reign of the Roman Emperor Hadrian in the 2nd century AD some 650 years after the project had begun. 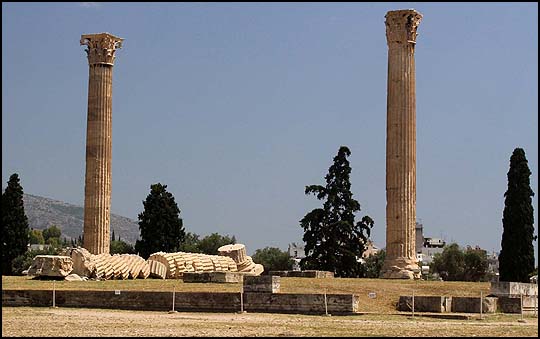 We were so close, but the photos were taken through a fence. The entrance was a quarter of a mile away which would have meant a half-mile walk to and from the entrance and then we would still have to walk up to it. So we took our photos and then waited ages to cross the road back. 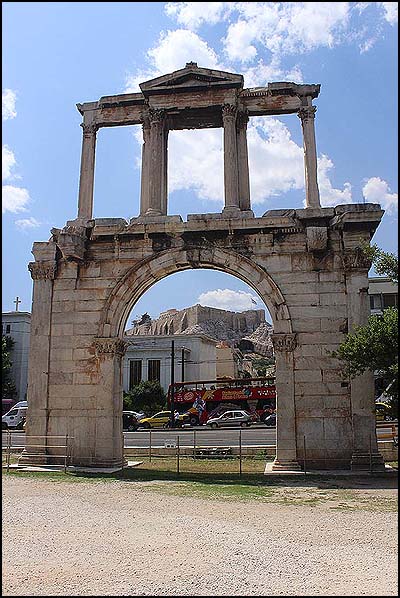 The Arch of Hadrian. It is thought to have been built to honour the Roman Emperor Hadrian for his arrival to the city for the dedication of the temple that we have just seen. He is named on an inscription as is Theseus (on the other side of the arch). It has been suggested that they were named as founders of ancient and modern (that is Roman) Athens.

We meet up back with the ladies and have a soft drink at a street cafe. As we wait for the bus another member of the party moans to us about the guide. He tells us that they only had 20 minutes left by the time they came out of the museum and that they have not had time for any lunch...