Edgar Pedley in Germany at The End of World War One

I made a bit of a boo boo yesterday with my entry in the Edgar Pedley series. These two postcards featured here should have come first. So apologies to those of you following Edgar's time in the Signals Corps during World War One. This marks the last of my entries about Edgar unless Hayley Easthope, whose collection the postcards come from, can find any more. 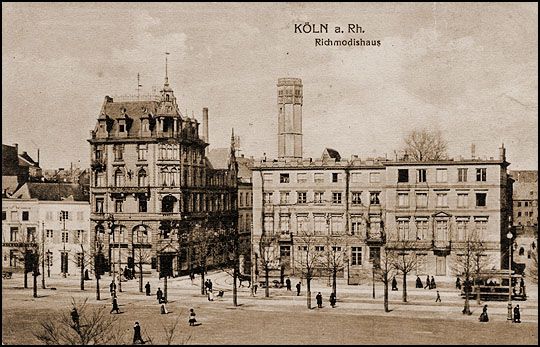 I said in yesterday's entry that Edgar had had some leave at the end of the war, but it was obviously not for a while as these postcards prove that he was first sent into Germany as part of the occupying force. They were posted on the 19th January 1919 and postmarked by an anonymous Field Post Office, but both the postcards depict the German city of Köln or, as we would call it in English, Cologne. French actually - Cologne was what the French called it when it became part of the French Empire under Napoleon Bonaparte.

Britain kept an occupying force in the city from the end of the war until 1926 and Edgar seems to have been a part of the British Army of the Rhine. I don't have his full message this time. He is once again writing home to his friends Arthur and Fanny Storr in Shropshire with whom he lodged. He sent the message in three parts, each on a separate postcard, numbering the parts in the corner. I have only parts two and three.

Edgar congratulates Arthur on his own homecoming. We know that Arthur had been wounded and he must have been demobilised from the army at the end of 1918. Edgar's own circumstances are telling on him a little as can be gleaned from the tone of his message. 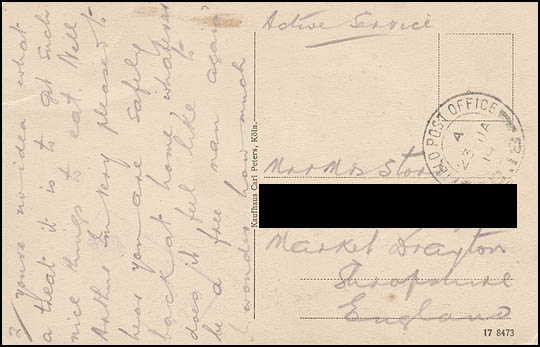 2/ ...you've no idea what a treat it is to get such nice things to eat. Well Arthur I'm very pleased to hear that you are safely back at home, whatever does it feel like to be a free man again? I wonder how much... 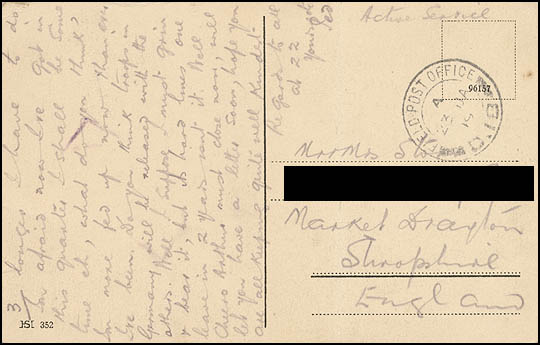 3/ ...longer I have to do. I'm afraid now that I am in this quarter I shall be some time eh, what do you think? I'm more fed up now than ever I've been. Do you think troops in Germany will be released with the others(?) Well I suppose I must grin and bear it, but it's hard lines, one leave in 2 years isn't it? Well Cheerio Arthur, must close now, will let you have a letter soon. Hope you are all keeping quite well. Kindest Regards to all at 22 (the house number) Yours etc. Ped 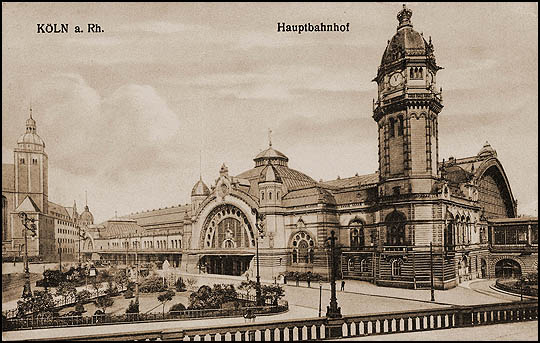 Alfred Edgar Pedley was born in 1892. As we have already seen due to my mistake with the order of these entries, he must have been sent home on leave temporarily sometime between January and April 1919 as the last postcard in my possession has him about to board ship in Folkestone on May 19, 1919 heading back to Germany.

The postcards have come from the collection of Hayley Easthope, a friend I met through a common interest in the singer Billy Fury. Fanny Storr was her great aunt, being the sister of Hayley's grandmother. Arthur Storr died in the early 1950s and at some point afterwards Edgar and Fanny were married together. Without any more information I'm not making any assumptions about this fact other than to point out the following:

In the 1950s a single man lodging with a single woman would be bound to cause gossip and a little scandal. The likelihood is that their marriage was one primarily of convenience to avoid scandal and to allow Edgar to carry on living at what he would obviously regard as home, but it was also a marriage between two people who had been long-standing friends. Yet in Edgar's postcards he addresses them to Arthur and Mrs Storr and never takes the liberty of using Fanny's given name.

Edgar would by then have been in his sixties. Being sixty in 1950 was not quite like being sixty in 2015. Life expectancy was not as long as it is now and in photographs of the time, people of middle age in the 1950s can look a lot older to our modern eyes. Edgar died in 1966 aged 74. He was one of those brave men who risked everything to keep their country safe and as such I salute him. 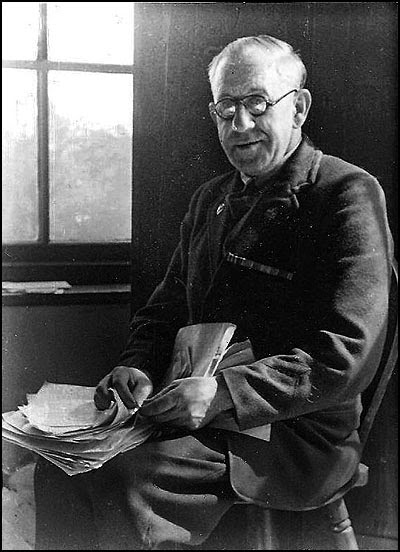 Back to the Edgar Pedley Index
Posted by John Burke at 12:51