Tuesday 16 June 2015. Thomson Majesty has travelled through the night, from Turkey on the eastern side of the Aegean back to Greece on the western side. 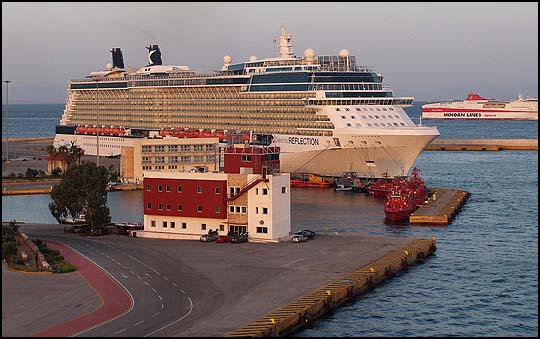 David and Jeannie are up early to catch the arrival of Thomson Majesty into the Greek port of Piraeus. Very early... On one of David's photos the clock on the poolside bar on Deck 10 reads 06:25 am. However we are right behind them. By about an hour and a bit... 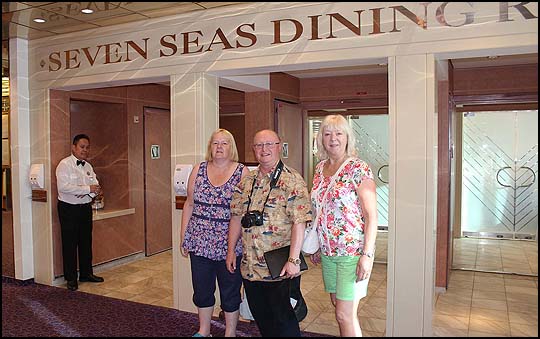 We have a coffee in the Cafe Royale on Deck 10 forward and then go down for breakfast to our favourite spot in the Seven Seas restaurant. Halfway through breakfast a familiar face walks past our table. 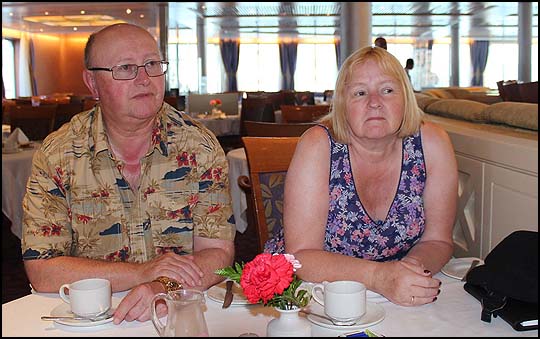 "Pipit!" I say in surprise. Pipit was our waiter on the Thomson Destiny in 2011 and on the Thomson Spirit when we went to Norway in 2013. At first I thought he must have transferred over from the Spirit in Mykonos but it turned out he had joined the day before, being one of the group of crew members we had seen bringing their luggage on board in Kusadasi. Although not stationed by us, he made a point of coming to speak to us every day after this. 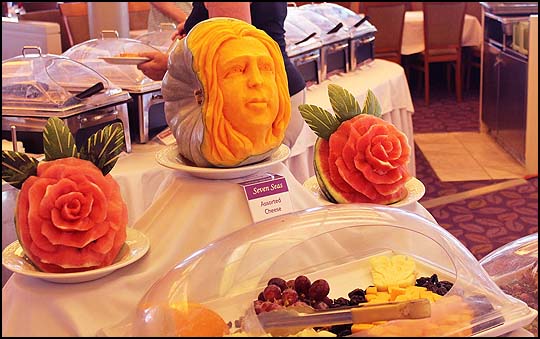 Fruit and vegetable carvings in the Seven Seas restaurant. By now the waiters are getting used to David grabbing his camera at all opportunities and eye him warily before approaching our table with loaded plates in case he shows signs of excitedly leaping up and backwards... 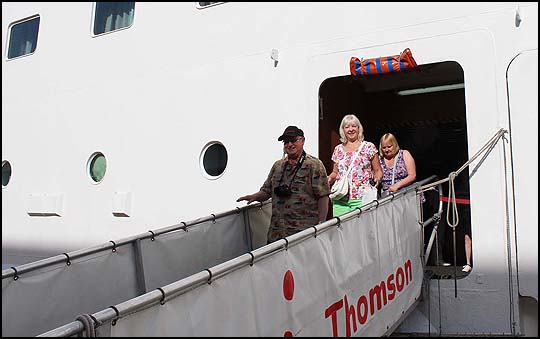 Breakfast over and he has changed tactics for today. Instead of photographing us on the gangway getting back on, he hairs down to the dockside as fast as possible and stops us on our way off the ship! 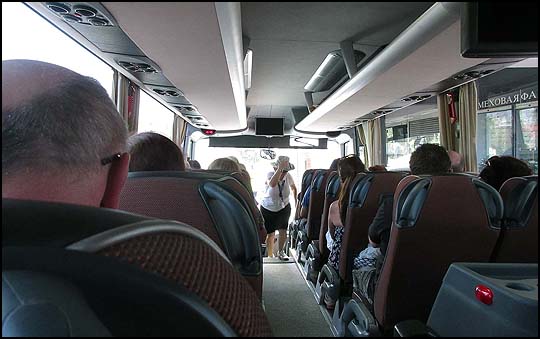 We have a full-day excursion today to Athens. I've decided not to climb up to the top of the Acropolis as I have a very nasty big toe, caused by a bit of toe nail cutting into it. I've had it most of the week but by now almost the entire toe is bright red and swollen and very very painful. 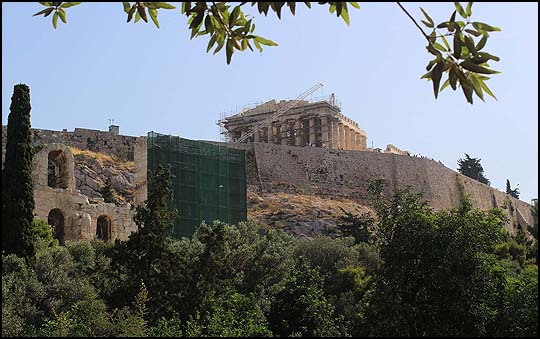 Luckily we have already been on the Acropolis in 2009 so this isn't as disappointing as it might have been. Especially when David and Jeannie come down later spitting about the guide. She had stopped her group in the middle of four other groups instead of going to a massive empty space nearby and there was no chance of hearing her. Plus at one point she had said to David, "Don't be taking photos - you need to watch your feet here..." Yes: that's why you visit the Acropolis - to spend your time looking at your feet... Totally the wrong thing to say to The Clicky-Monster...! He did ignore her of course and there will be some of his photos in a minute. 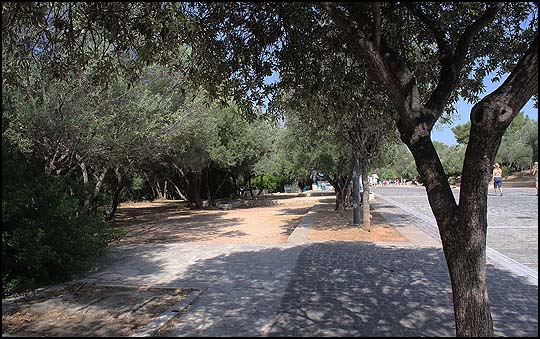 I can't sit or stand still for the entire morning so we wander down the road - well Fran wanders, I limp... This will lead in front of the Parthenon high up on the cliff and also in front of the Odeon of Herodes Atticus and the more ruinous Theatre of Dionysus. 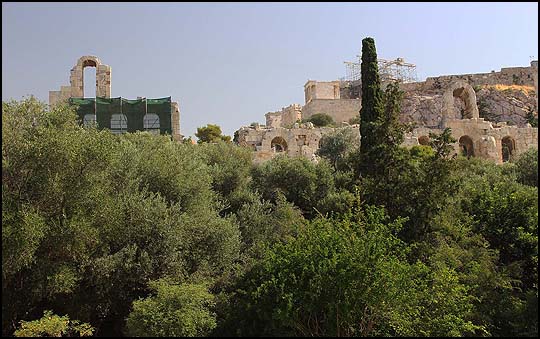 The Odeon of Herodes Atticus is still in use as a theatre, hosting opera and even rock events but it is hidden by the trees. Built in 167 A.D. it seats 5000 and was originally roofed with cedar timber. It may well be worth the entrance fee, but we decide to go farther down to the other theatre. 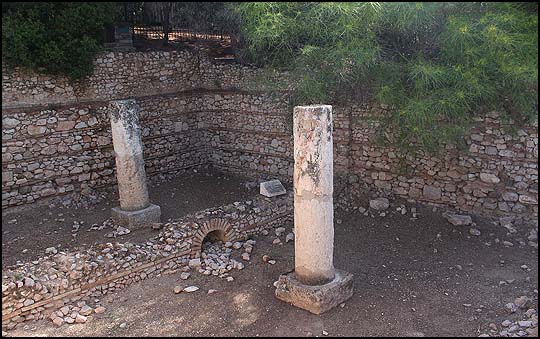 At the entrance to the Odeon is what looks like an old water cistern. 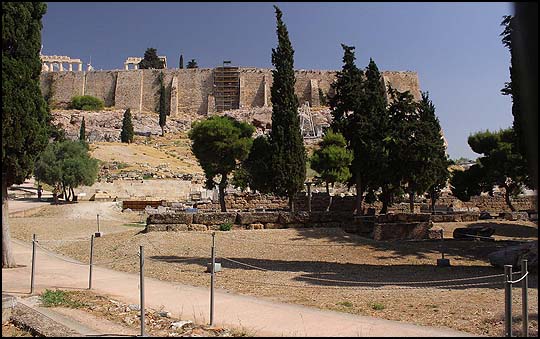 Unfortunately very little can be seen of the Theatre of Dionysus either. The slopes of the seating rows can be seen, but the small group of trees hides the few rows of remaining stonework. The origins of this theatre go back six or seven hundred years before the better preserved Odeon was built. It was commenced in the 5th or 6th century B.C. with early seating being wooden flats on terraces set into the hillside. It would have seated an audience of 17,000. 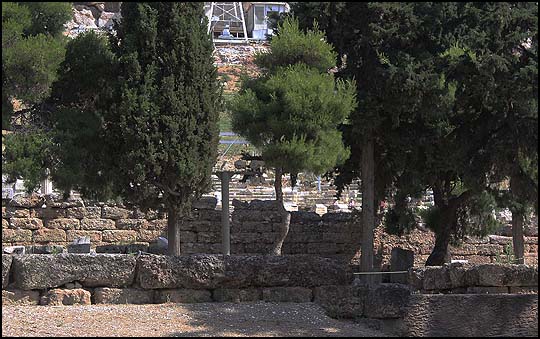 I swap to the telephoto lens to look between the trees and a small glimpse of the theatre's stone seating can be seen. 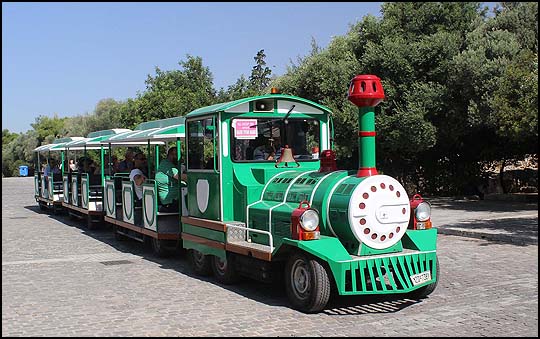 Road trains head up and down the hill from the entrance of the Acropolis. We don't know at the time but we are to return to the spot we reached in our walk in order to visit the Acropolis Museum after a sight-seeing ride through the city. 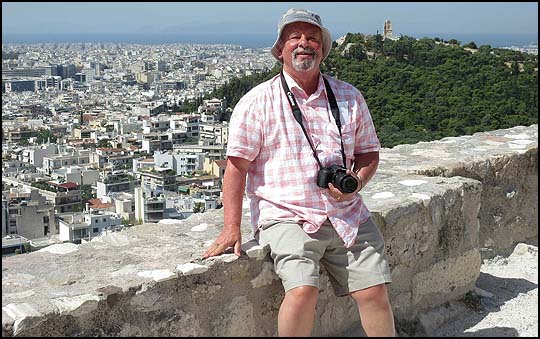 Meanwhile up on the hill, David and Jeannie have deserted the guide and here he sits on the wall behind the Parthenon with the hill on which Cliff Richard sang The Next Time in the film Summer Holiday over his left shoulder. 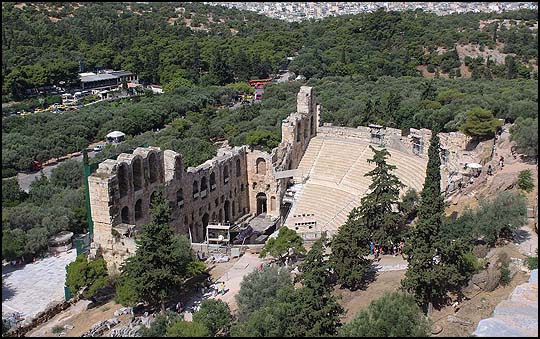 From his vantage point he has managed a much better view than mine of the Odeon of Herodes Atticus. 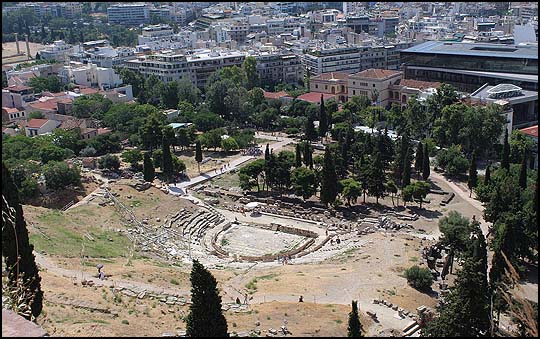 Not to mention the Theatre of Dionysus. (Sickening isn't it...) 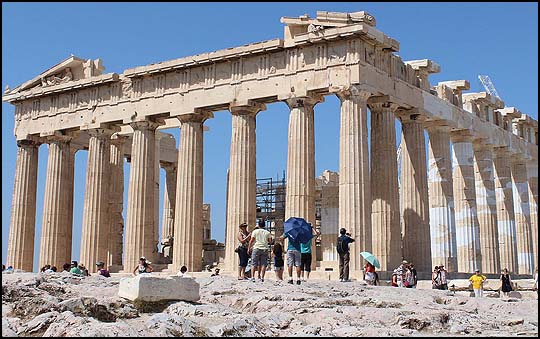 The Parthenon. Empty in the middle because under Ottoman rule, the Turks stored their ammunition in the building and during an attack by Venice in 1687 it ignited, destroying much of the building and sculptures in the ensuing explosion.

In 1801-05 Lord Elgin, Ambassador to the Ottoman Empire in Istanbul, acquired some sculptures which were sold to the British Museum in 1816. The Greeks would like them back to display in their own museum - it is accepted that they can never be re-attached to the building. Whilst not favouring either side in an argument that has far more to do with how best to use them to raise awareness and knowledge of ancient Greek art and culture, I do have to say that 247 feet of frieze makes a bloody boring museum exhibit in an otherwise sparsely furnished room unless you are intensely interested in Greek history... 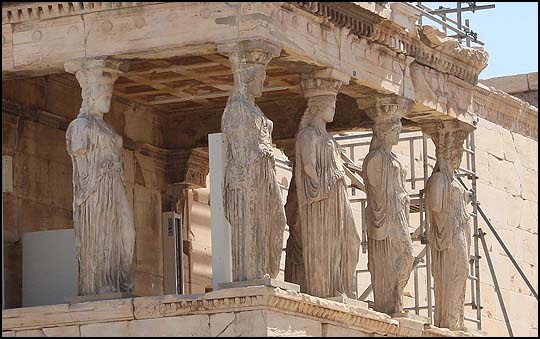 The Caryatids are female figures who act as supports for the porch of the Erechtheion. The temple dates from 421-406 B.C. and the caryatids in situ here are casts of the originals, five of which were removed to the Acropolis Museum in 1979. A sixth had been removed in 1801 by Lord Elgin and is now in the British Museum. 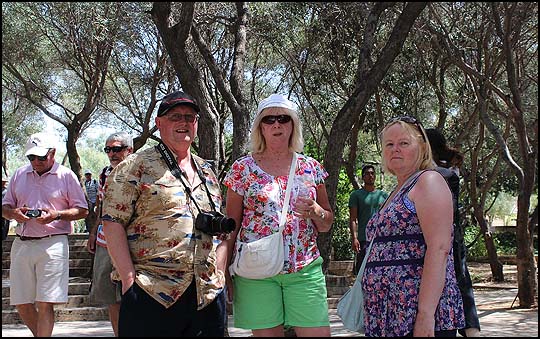 We had wandered the slope to the museum and back and looked in a few shops, had a granita (we would call it a slush drink) and dodged the busker who was playing Bob Dylan's Knocking On Heaven's Door, the song of choice for not-very-good guitarists... We also couldn't help raising our eyes to the sky as an English woman stopped one of the many tour guides and asked her what to do as she couldn't remember where she was supposed to wait for her bus and it was due to go in 15 minutes.

"If you wait here someone will come looking..." said the guide. Ten minutes later the woman realised the time and that the bus would have gone 45 minutes ago. She stopped another guide who, bless her, phoned and arranged for her own bus to take them to meet the one they should have got. Please note folks - even on holiday you should leave your brain switched on... Ah, our own party are back!