Sketching, Swimming and Eating in Crete 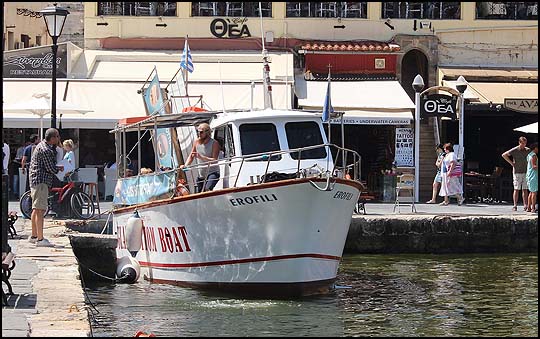 I am sitting on a bench and drawing a sketch of the harbour area whilst Fran, David and Jeannie are having a wander. Miss Franny comes back to ask if I would fancy a ride on this glass-bottomed boat. We agree to catch it on it's next trip. 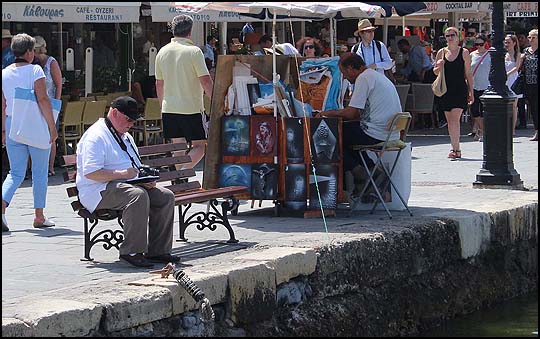 The sketch is taking shape. In any case this is a very nice place to sit and take in the scenery! 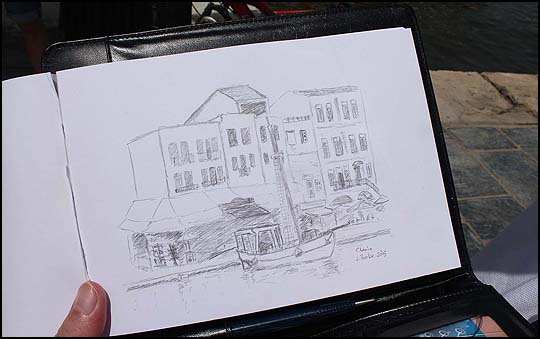 Most of the detail is there by now and we decide to go to get on the boat which has returned and is starting to take on new passengers. I can finish the sketch later. 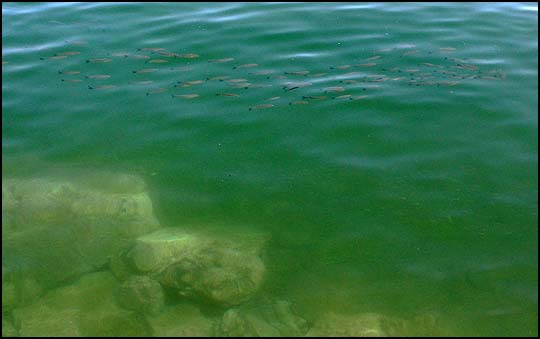 A small shoal of fish swim by in the harbour close to the wall. They are between four and six inches long. 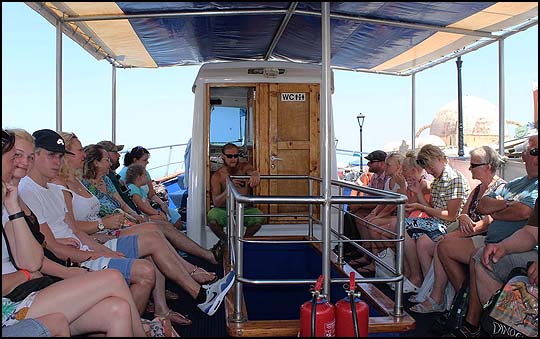 The good ship Erofili filling up before an hour-long trip which leaves the harbour and goes out to a small island which used to be a plague quarantine island. 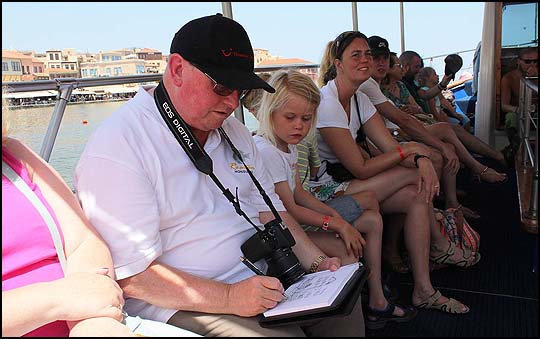 As we wait for the boat to fill up I am shading in on the sketch. The little girl is Danish and doesn't speak English but is interested in what I'm doing. 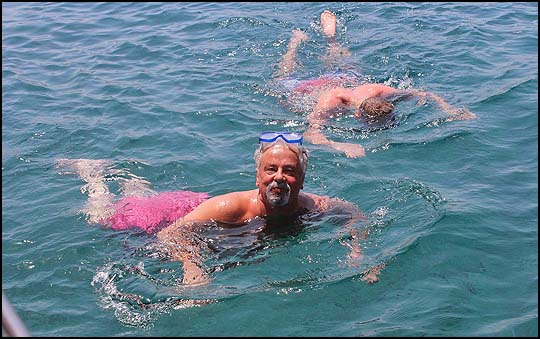 Once out at the island the guide asks if anyone wants to swim. David is wearing his swimming gear under his clothes so decides to have a go. 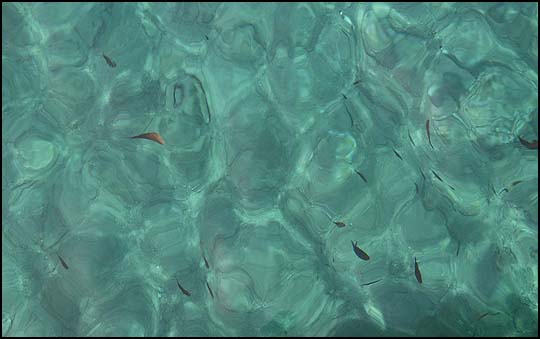 Despite our best efforts at chumming, these are the largest fish we can attract. No sinister dorsal fins break the surface to provide the prize-winning photo... 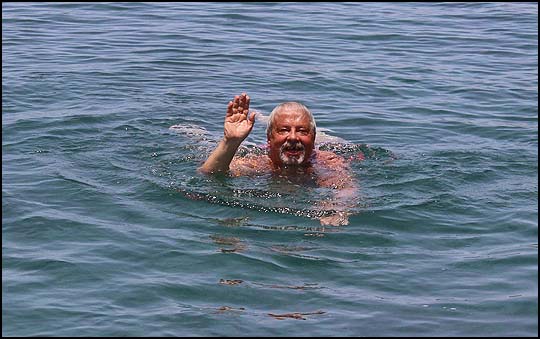 This would be the prime moment though! Jaws? Kraken? Giant squid? Anyone? 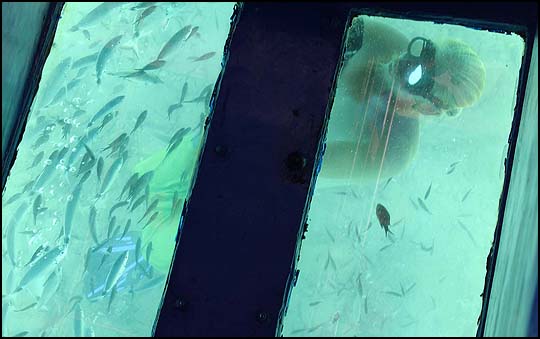 Our bearded guide attracts a host of tiny terrors of the deep with a handful of fish food and leads them under the boat and the glass bottom. 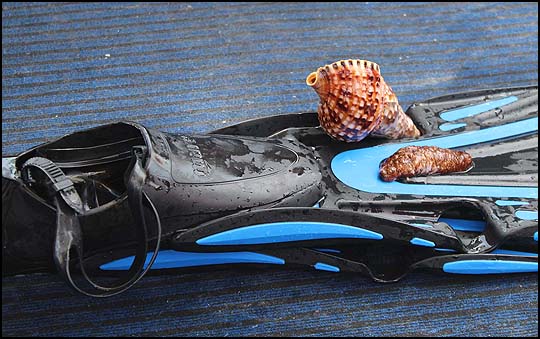 When he climbs back onboard he has collected a shelled something or other and a sea slug that looks a bit like.... well you can tell what it looks like... 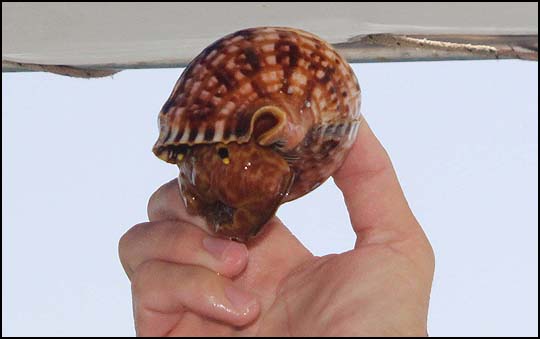 The shelled something has only one orifice and as he holds it up it oozes out to hang before sneezing and zipping back up into the shell. Ugh! And what are those tentacle things??? 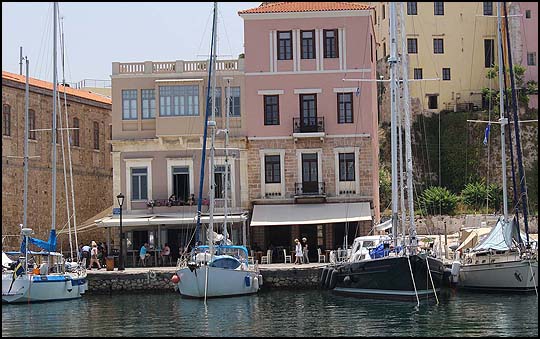 The captain refuses to listen to our pleas and the boat hangs about until David has come back aboard. We are now returning to the harbour which we shall sail about for a bit before docking back in the boat's usual corner. 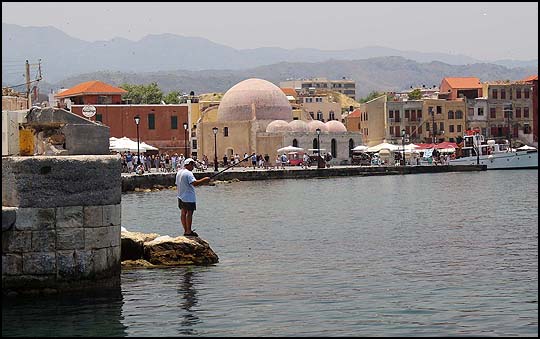 A local is fishing from the corner. If he's after those fish we saw earlier, he'll need a lot of chips to go with them... 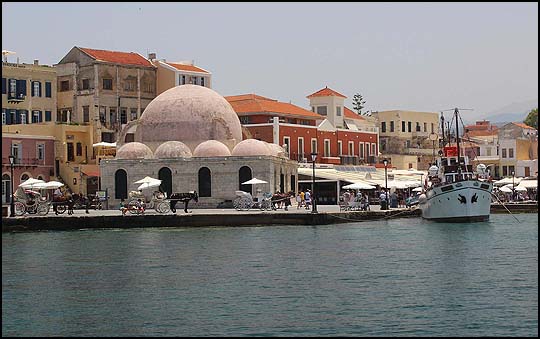 Plenty of domes there! This is Giali Tzamissi (the Seaside Mosque), built after the Ottomans drove out the Venetians from Chania in 1645. Its single, though small, minaret was demolished in 1920 and it suffered from the intense German aerial bombing of World War II. It once had a walled yard with palm trees. 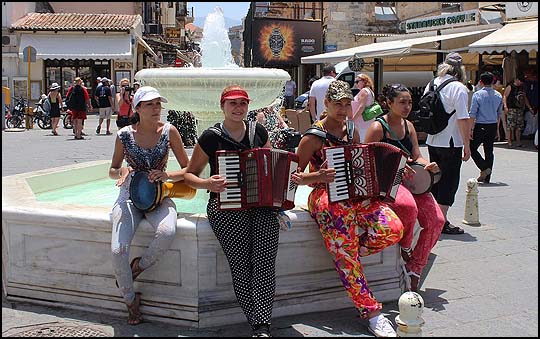 A quartet of musicians play near the cool of a fountain. 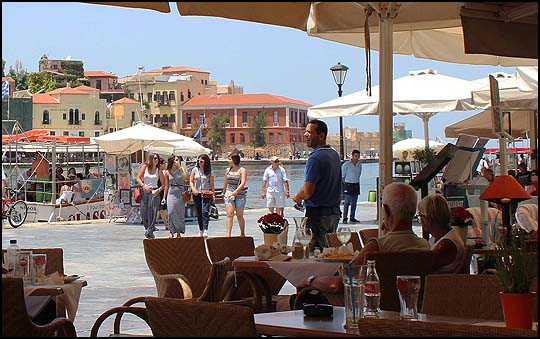 It's lunchtime and we have lunch at a harbour-side cafe. Our glass bottom boat is embarking new passengers ready for another trip. 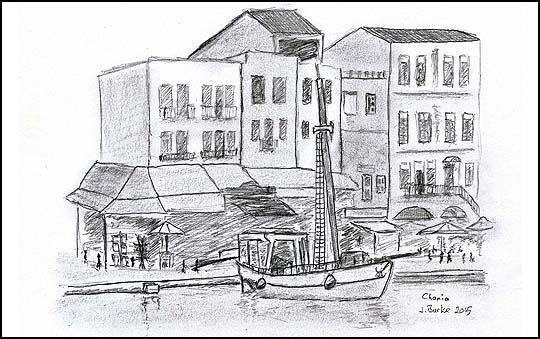 We order food and as we wait for it with a glass of wine to hand I have another go at the sketch. This is the finished article with people added and shading applied. 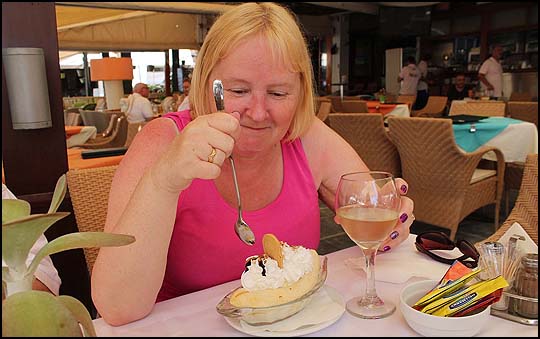 David and Jeannie and myself are having a mix of sandwiches, chips and salad but Fran goes straight for the sweet stuff and has a banana split! 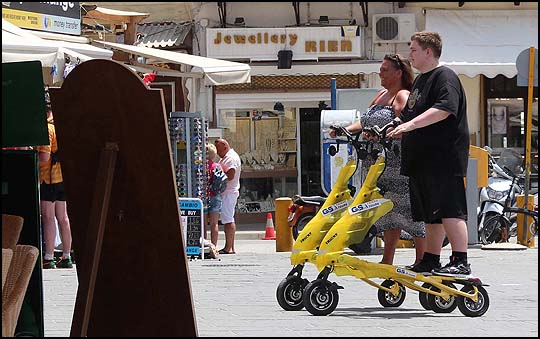 As we are having lunch some rather weird little motorised tricycles appear. They look fun, though they also require some balance as she demonstrates by almost falling over... 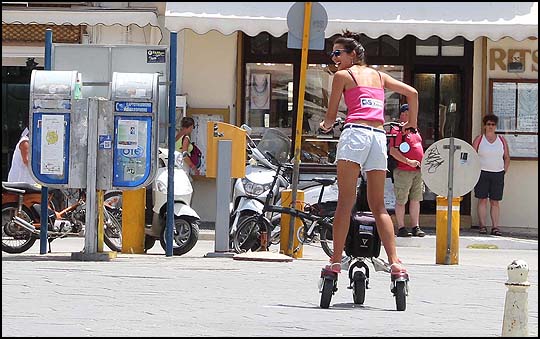 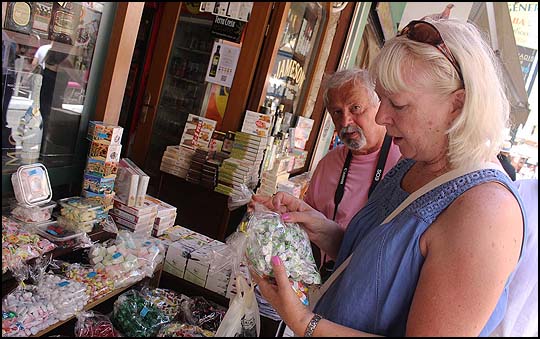 We are walking slowly back towards the bus stop. A large display of sweeties outside a shop draws attention. Some purchases are made. I don't bother with sweets these days. I always seem to need dental work as I can't help but chew and then hard sweets play havoc! 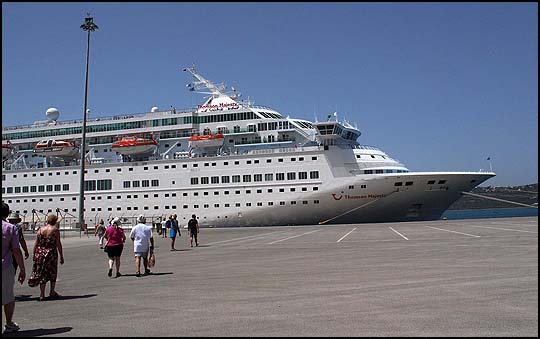 Fran finds a clothes shop with kids' sized clothes and buys a couple of dresses to take back for Grace before we get back to the market and find a bus waiting for us. Another 20 minutes and we arrive back at the port.