Last Sunday was the Fleetwood Festival of Transport Tram Sunday. We went down early in the morning to get a look before the crowds got too big. 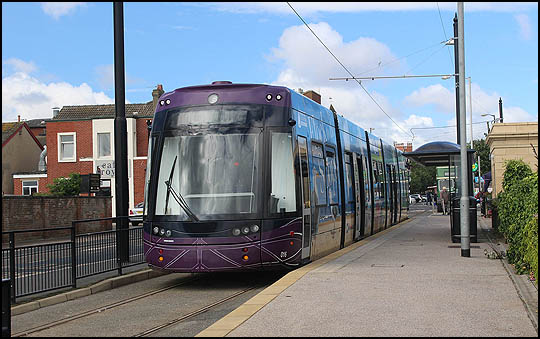 As it is Tram Sunday, here's the first vehicle we saw. One of Blackpool's current Flexity trams (ugh - light railway rubbish...) There were a couple of the classic trams round the corner. Now known as "heritage" trams, they no longer go up and down Lord Street during the day as all the modern widening of pavements and narrowing of roads to accommodate the raised platforms for the Flexity trams creates bottlenecks of crowded people in the roadway. It also reduces the space available for static displays of buses and classic cars. 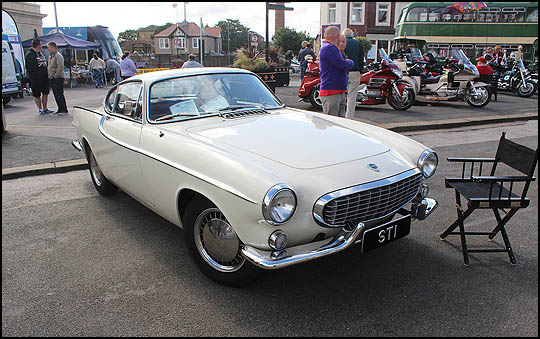 The first car we saw was an absolute cracker. A 1962 Volvo P1800 Registration 71 DXC. The registration plates were overlaid by ST 1 plates whilst on display as this car is the original one, purchased for the TV show The Saint and driven by Roger Moore. The car has its own website for anyone interested in its discovery and restoration.

The passenger seat was fully reclined and a woman said to the owner "Oh it's got a bed!" - that Saint you know... his halo has slipped a bit... 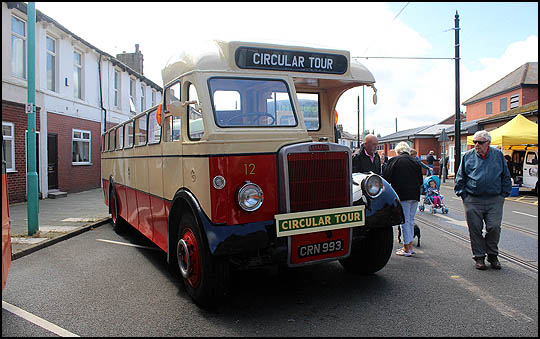 A Leyland Tiger PS2/5 with half cab and a Burlingham body built in Blackpool. Made in 1950 and entering service with Ribble Motor Services, it was one of three Tigers purchased in 1960 by Southport Corporation Transport. They converted them to open top bodies for summer service circular tours around the town. It was No.12 in the Southport fleet and was withdrawn in 1985, 11 years after Southport Corporation Transport had been taken over by Merseyside Passenger Transport Executive (MPTE). It was subsequently left to deteriorate in Rhyll following some time with a North Wales operator and has only recently been lovingly restored. 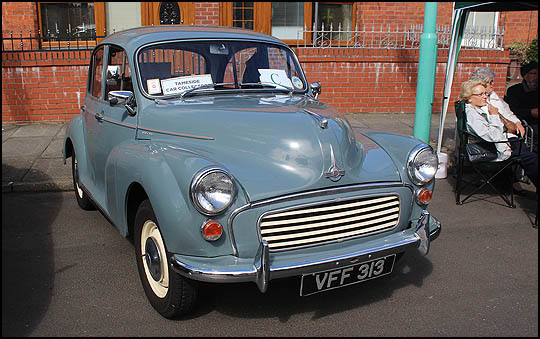 The much loved Morris Minor 1000. The Moggy Thou as it was affectionately known was the third model of the Morris Minor in this body shape - the first Morris Minors dated from 1928-1934 which had a totally different body shape. A gap of fourteen years followed before the more familiar shape of the Morris Minor revived the name in 1948. The Series II model came in 1952 when both Morris and Austin were merged into the British Motor Corporation. The Minor then became the recipient of the Austin engine developed for the A30 (see below).

The Minor 1000 was the new model from 1956 and featured a curved glass single pane windscreen and a larger engine. The old-style semaphore indicators were replaced with more modern flashing lamps to front and rear. In 1962 a new model, still called the Minor 1000, had a new instrument layout and toggle switches on the dashboard and the front indicators were now integrated with the front sidelights as in the model shown. The car was produced until 1972 when it was officially replaced by the Morris Marina. 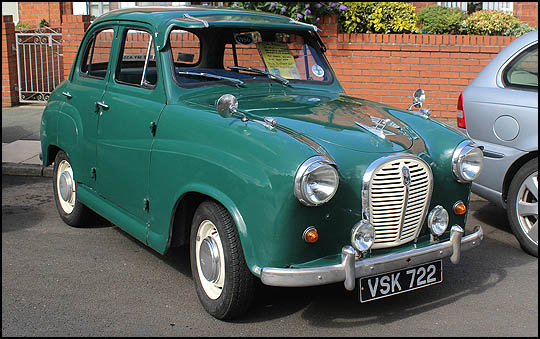 The 1956 Austin A35 was a modification to the A30 which had pretty much the same body shape. The A35 had a larger rear window and semaphore trafficators were replaced by flasher units. It had a painted grill with chrome surround rather than the A30's fully chromed grill. The A30 had been Austin's response to the Morris Minor and was available from 1952 and priced at £62 less than its rival. It had only a single windscreen wiper and sun visor both on the driver's side, but passenger ones could be added as optional extras. 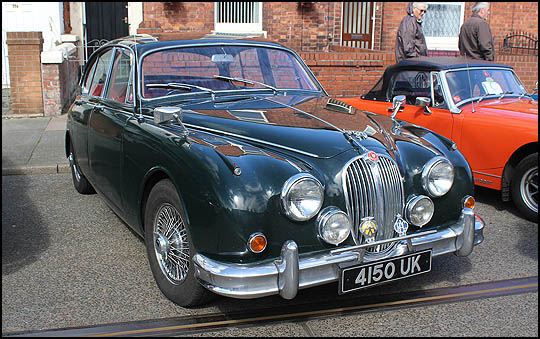 This was included in the programme as a Jaguar Mark 1 (1955-1959). Officially called the Jaguar 2.4 Litre or Jaguar 3.4 Litre depending on the engine size, the "Mark 1" only became so known when the Mark 2 replaced it in 1959. And I'm positive that this is really a Mark 2. It has a Mark 2's sidelights and indicators - the Mark 1 had vertically oblong sidelights where the indicators of this one are situated and the two spotlights would be grills on the Mark 1. The other giveaway is the very narrow nature of the pillars between windscreen and side front windows. The Mark 2 had a massive 18% more glass than the Mark 1 and thus much improved visibility. My brother had one of these for a while. A lovely car to ride in. 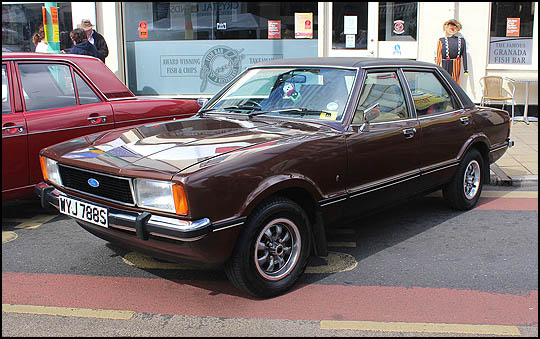 This is a bit later! The Ford Cortina MkIV (1976-79) has a certain nostalgia for me as I had one myself, though it turned out to be an ex-taxi and although only three years old when I got it, it was somewhat knackered in the engine department! This was the first Ford to have a top model labelled Ghia and this 1978 example is one such. It disappeared from the roads faster than any other Cortina model. Apart from wide use as a fleet model and taxi both of which uses added mileage quickly, it did tend to rust quite easily! The Mark V which replaced it looked very similar externally but had wrap-around front indicators that could be seen from the side. 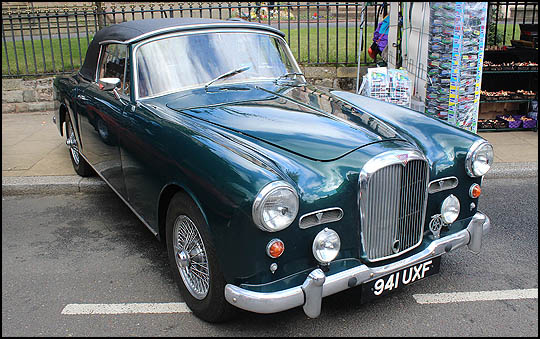 Again looking much more like an Alvis TD 21 than the described TC 21 in the programme is this rather spiffy looking convertible with the wire-spoked wheels. The TC 21 had a different body shape altogether, more reminiscent of the 1950 Rolls or Bentley. This looks like a TD 21 Series 1 (1958-61) but has the tiny front sidelights of the car it replaced - the Alvis TC 108G (1955-58) of which only 37 were ever produced. 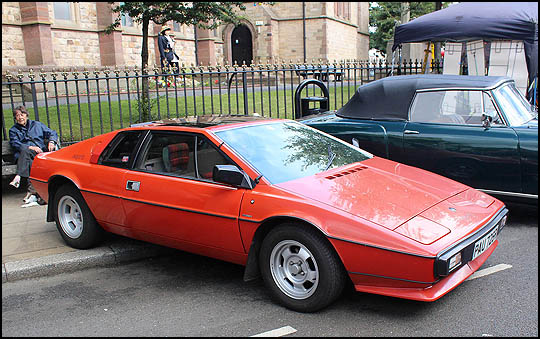 Back to Roger Moore's secret agent cars! The Lotus Esprit was featured in the James Bond film The Spy Who Loved Me in 1977 and turns into a submarine after driving off the end of a jetty to avoid the gunfire of the lovely Naomi, played by Caroline Munro, who is pursuing him in a helicopter. The Esprit was produced from 1976 and the one shown, being an "R" registration is one of the first year of production. Please note that if you have one of these cars, it is inadvisable to test its submarine capabilities by driving it into the sea... 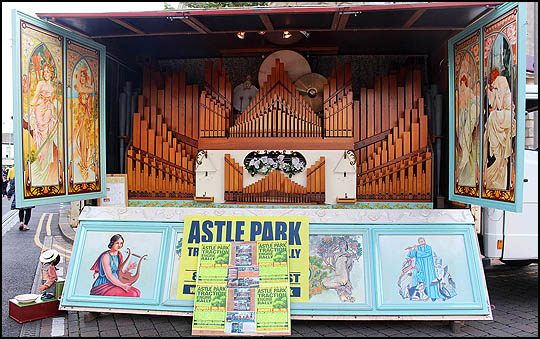 Wooden piped fairground organ. It sounded lovely and chatting to the owner I found it was much more recent than I would have thought, having been built in 1990. 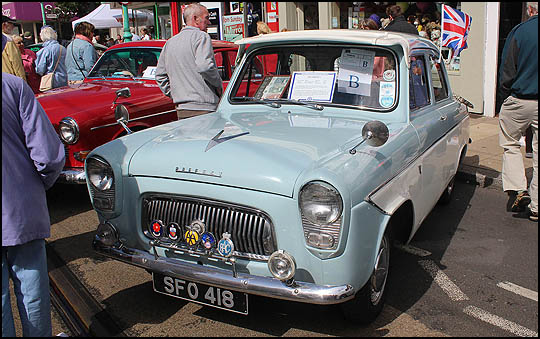 In the days before The Hitch Hiker's Guide To The Galaxy, the name Ford Prefect meant one of these. The name came into being in 1938, though the model shown, the 107E is the last of eight models and the second of those with the new body shape. Previous models had running boards, huge swept wings over the front wheels and a stagecoach style boot. The 107E was in production from 1959-1961. The Prefect was the 4-door saloon and the Anglia was the two-door variant. When the body shape changed in 1953, the old "sit-up-and-beg" Anglia E494A continued in production as the Ford Popular 103E until 1959. 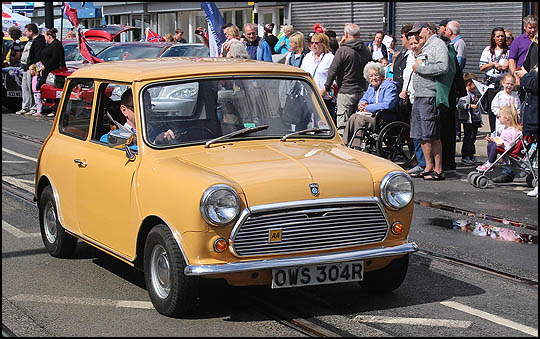 The Mini. Not the current large car that holds that name and is debatedly misrepresenting itself, but the proper 100% wonderful mini Mini! It came out in 1959 and lasted all the way to the Millenium. I had a 1972 model from new which would have been the Mark III. The engine was fitted in sideways, the doors of early models were opened by yanking on a bit of string and it had one of the worst safety records for drivers in a crash as the engine was already almost on your lap before the crash.

It had front and rear subframes in place of a chassis and many cars could be seen running slightly off-skew with the rear wheels following a path to one side or other of the front wheels! But it was a fun and wonderfully nippy car that could be hurled round corners due to the the front wheel drive and it did very well in rally sports. Many were used as police cars and there were so many variants it was almost untrue - the early Austin version was called an Austin Seven and had the "v" turned sideways so it read Austin Se7en, there was the Mini Clubman with an increased crumple zone to address the previously noted safety risk, a Cooper S for the rally drivers, the Wolseley Hornet and Riley Elf versions with a sticky-out boot and somewhat pretentious upright narrow grill as used on the makers' larger models... The Wolseley even had an illuminated badge on the grill.

I had a Morris Mini 850, the smallest engine they came with. I customised it with yellow metalflake over the blue paint and added not two but four cone-shaped sports wing mirrors. It attracted vandals like moths to a flame...