Well I've still not managed to turn up the negatives of the photos from this photo album, so again I have resorted to scanning the photographs from the album. 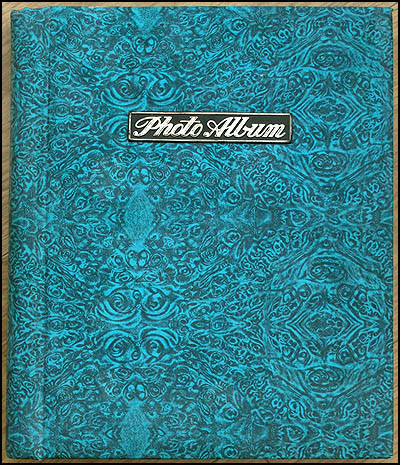 Last November I featured the photos from its sister album, which was red. This time it's a blue bordering on cyan - I'll call it teal for lack of something more inspiring! 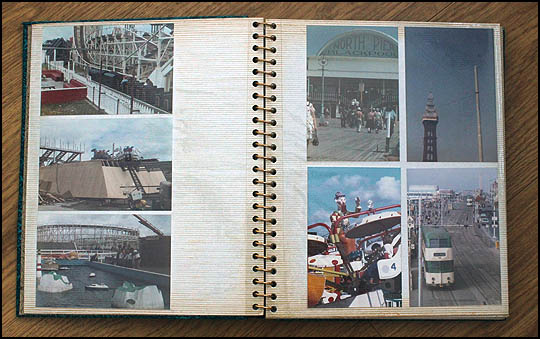 The photo album dates from 1977, the year after we had moved to Blackpool and I went somewhat berserk with the camera, loading film after film through it and ending up with a fair portrait of most of the bits of Blackpool I was most interested in at that time, which are the holiday bits... Because these are scans of printed snapshots, the quality is sometimes a little more rough than I'd like. Films had to be developed and printed in those days and quite often came back with horrendous colour casts that chemists were sometimes embarrassed about enough to put little stickers on to try to blame it on the photographer. "Red cast - film might be fogged. Load your camera in a dark place." Stuff like that. "Lens obstructed - keep fingers and camera straps away from in front of the lens." was another. I never remember one that said "Photo lab cock-up - very sorry" even when once an entire film came back with every print showing the right hand portion of one photo, a black line, and then the left hand portion of another photo... 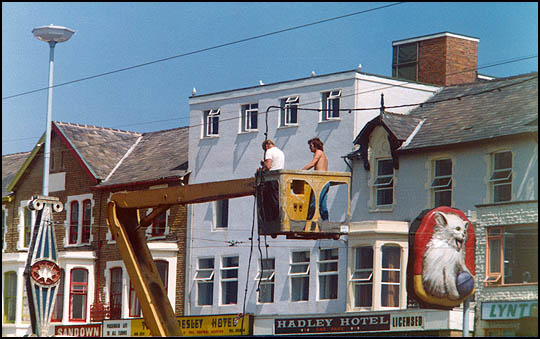 So a few photos of Blackpool's intrepid workmen from the Illuminations Department, starting with this one of a string of lights going up during the early season. I remember summers like that - all sunshine and blue skies... Whatever happened to them...? At this time the Illuminations were changing from flat wooden boards with coloured lights on the outside to fibreglass 3D mouldings with lightbulbs placed inside. The one on the right comes from a set of puppies and kittens. I hope he doesn't jiggle that string of lights too much - it'll be over like a flash... 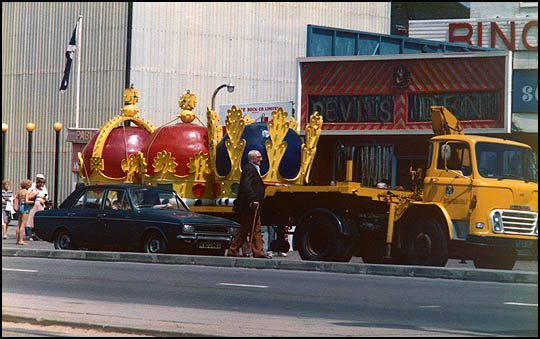 1977 was the Queen's Silver Jubilee year and these oversized crowns made an appearance for their second year. The Promenade has two lanes in either direction and an elderly chap with a walking stick feels quite safe walking along the narrow dividing pavement in the middle until he can cross. The car is a 1968/69 Hillman Hunter, my Grandad had one and passed it onto my Dad when he had finished with it. A nice car, I got to drive it about a bit too. The Devil's Den behind the lorry was a short-lived feature of the Golden Mile and the building with the corrugated cladding is Ripley's Believe It Or Not housed in the old Victoria Hotel, the first Ripley's "Odditorium" to be built outside the USA. 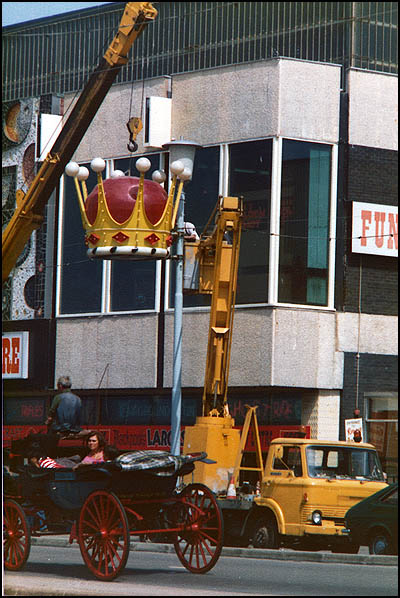 A little further up the Promenade more crowns are being lifted into place. In the background the Golden Mile Centre was the first of the large modern purpose-built amusement arcades. On two levels, it housed fairground rides on the upper floor. There was a dodgem car rink amongst them I remember. 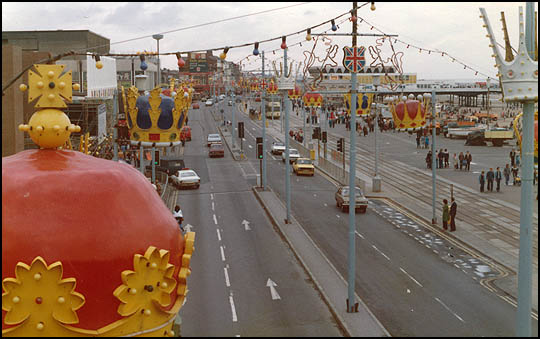 The crown display hanging along the Golden Mile. The sun has disappeared - so much for me enthusing about those 1970s summers... The photograph was taken from the pedestrian footbridge over the Promenade. Still relatively new, it was supposed to be one of eight originally but no others were built and it was demolished finally in 2009. 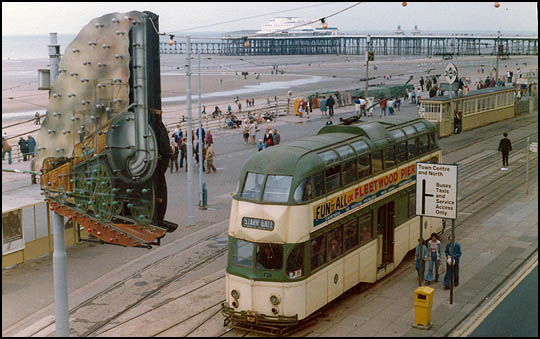 But hey, whilst we're up here, let's have a look around! We caught a glimpse of the train illuminations last November in the first series from the red album. This shows one in much better detail. It shows The Rocket, George Stephenson's famous locomotive. Appropriately coloured bulbs illuminate the painted flat during the Illuminations and those on the billowing smoke trail from the funnel are controlled by relays to flash, giving the appearance of movement. Similarly there are two rows of smaller bulbs set along the two lines of railway track which do the same.

On the real tracks below, Balloon car 720 has just set off from the tram stop and the conductor is in the act of closing the doors. The family walking alongside it remind us just how popular blue denim was during the 1970s! 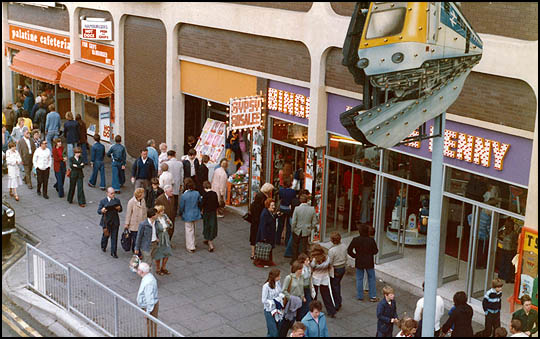 Looking north down from the bridge on the land side there's a glimpse of an ultra-modern high-speed Intercity train on the illuminations display and down on the Promenade, the open doors of the Purple Penny arcade. 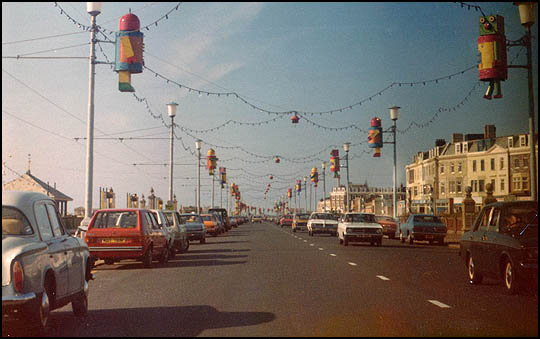 And I'll finish with this one, taken way down South Shore, looking north towards the Pleasure Beach. The illuminations here are animated robots. Their heads turn and they have animated arms or legs but not - if memory serves me right - both. Some walked and others waved their arms up and down. This photo also shows (look hard) some illuminations tableaux which at this time were not entirely confined to the north shore cliffs.

This photo had a sticker from the chemists that said "Warning! Photo light at one side and dark on the other - reason unknown!" The actual reason was that I'd borrowed my Dad's camera and the shutter was a bit sticky so it speeded up after it had got going... After this I took the plunge and bought myself a Canon AE1 SLR. The bee's knees!

Grateful acknowledgement to Nick Moore whose epic and awesomely excellent Blackpool Chronology website easily reminded me of the name of the Victoria Hotel (Ripley's Believe It Or Not) which I couldn't remember even after force feeding my brain with tuna sandwiches... Also thanks to Andrew Hazelhurst who helped clear up my mistake on the year the crowns first made an appearance!