Friday 3 June 1994. We left Stow-On-The-Wold having booked a guest house in nearby Bourton-On-The-Water and decided that instead of going straight there we would do a bit of a detour and try to find The Rollright Stones.

I've got a bit of a thing for stone circles and henges and hillforts and I'd never been to the Rollrights. 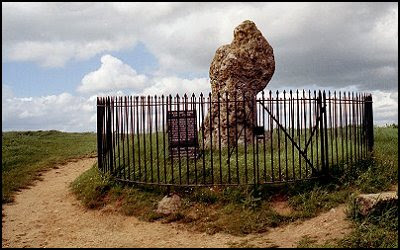 I had an Ordnance Survey map and by following that we easily found this. The King Stone, part of the Rollright group. No chunk of hard granite like you find in Cornwall but a more porous type of rock, weathered and eaten by acids in rain.

Apparently though, the strange shape of this rock has more to do with passing tradesmen battering chunks off it to use as lucky charms against the evil of the Devil.

We spotted what we thought were the Rollrights on the other side of the road and on reaching the road, turned to our left until we reached a well-formed track that took us to the next group. 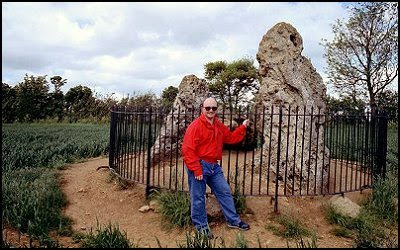 This group was obviously too small to be the Rollrights and in any case reminded me more of a cromlech or tomb. And so it turned out to be when I researched it much later.

These are The Whispering Knights, so called because the way that the five stones lean in towards one another suggest a whispered consipracy, the knights plotting against their king. They were probably covered by earth originally, one of several tumuli in the area. Why was this one uncovered? It had to be the tomb of someone important - lesser folk didn't move people to hump gigantic stones to build a large monument to them. Perhaps it was simple grave robbery or attempted grave robbery that caused the destruction of the earthworks.

So where were the Rollrights themselves? On the Rollright Stones website there is a simple map showing how we turned the wrong way from the King Stone. It looks obvious on the map but the main circle is screened by trees and it simply wasn't visible to us. The scale of the Ordnance Survey map we had with us didn't help as the entire group was just shown under one symbol. 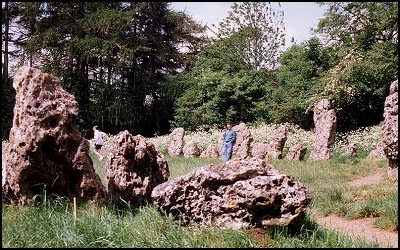 In the event, we decided they must be further down the path from the Whispering Knights and after a long walk we had to admit defeat and head back to the car.

We wouldn't find the Rollright Stones and take the photograph seen above until Thursday 30 May 1998, almost four years later.

Large versions of the photos: King Stone, Whispering Knights, Rollright Stones - not yet scanned at large size.
Posted by John Burke at 09:54