Saturday 20 August 2005. Our free time in the town of Capri, on the island of Capri, but not driving round in a Capri, is coming to an end and we meet up again with the rest of the excursionists under the clock tower. 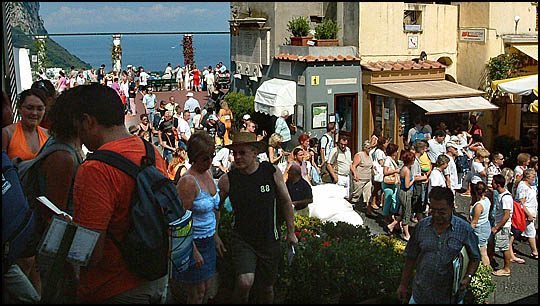 There are masses of people wandering about - it's a wonder the island doesn't sink every summer and bob up again when the tourists have gone. Jennifer Lopez was peeping out of her hotel window and thinking "Bugger that, I'm not going out there with all that lot wandering about..."

We were shepherded onto a coach - "Hey-a Shepino, come-a by-a!" and off we went to a marvellous viewpoint that included the very thing Mum had come to see. 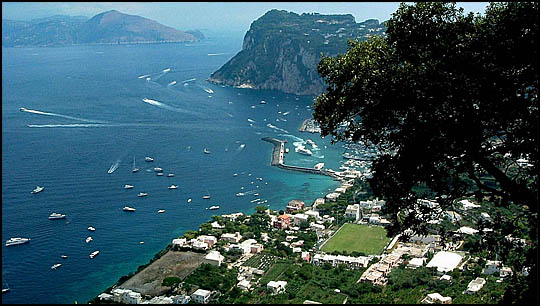 One of those white roofs down there below us was Gracie Fields' villa. I've no idea which one... Gracie was of course something of a legend. A brilliant singer - though this might be disputed by any modern ear that listens to "Sally, Salleeeeeeee! Don't ever wander..."

"Hey-a you! You with-a da hat! You-a stop-a da woman-a screeching-a hey?" Look, easier said than done, pal. She's my Mum, I've known her all my life and she's never been shy. She single-handedly saved 120 sailors once at Dover in a thick fog when the fog horn broke and she stood on the rocks bellowing "F-o-g-g-g-g-g! F-o-g-g-g-g-g!" Strangely enough at the same time three ships were run aground at Calais, thinking they were perilously close to the White Cliffs...

Anyway we came originally from Rochdale so Gracie was almost family in my mother's eyes. When she was still alive (I'm back talking about Gracie now by the way) she used to invite any Britishers with the stomach to listen for a cup of tea and an arpeggio or two. I think "arpeggios" are those rather dry biscuits that you can dunk... 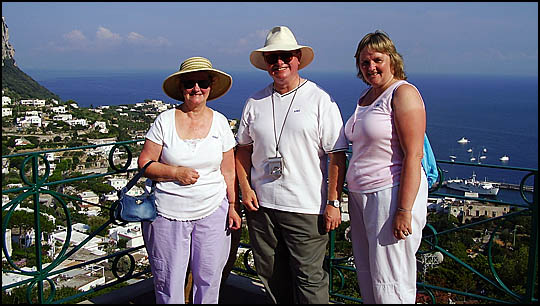 So we have a communal picture taken, mainly because if I'd taken one of Mum on her own she'd have backed herself over the cliff edge... "Sally, Salleeeeeeeeeeeeeeeeeee!!!!" Now the keen-eyed and faithful followers amongst you may have noticed that this photo was included on the last page about Capri... If not - then please pay more attention.

And yes, at this point I'll apologise now for the hat. After the first splash of sea spray after getting on the boat to come to Capri, it just sort of flopped. However I grew quite attached to it and was almost inconsolable when, on our way home, I put it in the X-ray machine at the airport and it didn't come out the other side. I'd grabbed all my bags and bits and bobs (Well I didn't want X-rays getting at them...!) and I was sitting on the plane and fastening my seat belt when I suddenly said in an anguished voice "Where's me hat?!?"

Meanwhile half a dozen security guards were trying it on and saying to each other "Hey-a, whaddaya think-a, pretty damn-a chica no?"
"Hey-a is-a mine-a!"
"No-a mine-a!"
BLAM! BLAM! BLAM!
"Is-a okay-dokay-a you-a can have-a the cruddy thing-a!" 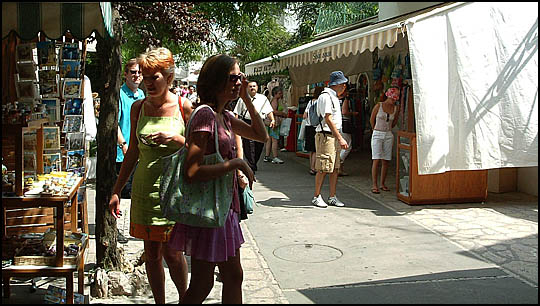 The coach takes us round to the town of Anacapri where we have some free time to look around the shops and street market. 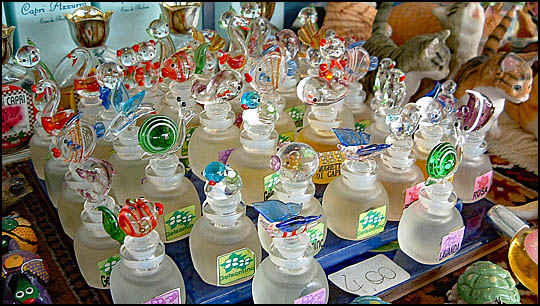 The ladies are suitably impressed with this and with a cursory glance at the perfume bottles, liqueur bottles and shampoo bottles, they make a bee-line for the inevitable fridge magnets stall. 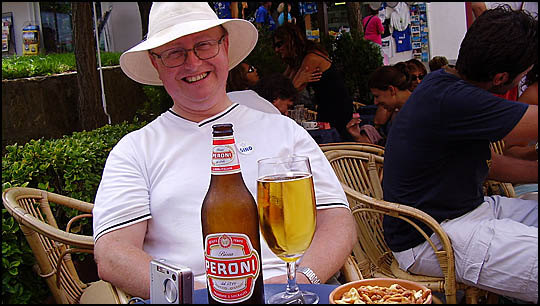