I know...! Us?!? Rehearse?!? But once again we found ourselves trying out new stuff. 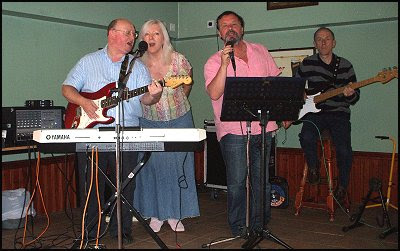 Last week we finally got round to going out for a "band meal", that is all three band members with wives. We had a wonderful meal at the Italian Orchard in Broughton, near the M6 motorway bridge on the Longridge Road and whilst we were merrily ruminating (or whatever we were doing) Bob suggested we ought to do The Hollies number Just One Look.

So on Saturday I got the keyboard out and had a listen to the original and dashed off a backing onto the keyboard. Dashed a bit too quick actually as I left a verse out... darn it! But it wasn't all a waste as I'd also had a go at another great hit from the same group, I'm Alive and that proved an instant hit with the other guys once David discovered he really could sing that low!

We'll be trying it out in a few weeks at our annual spot in the courtyard at Blackburn's Witton Park (see column at left on the band's blog for full details of public gigs).
Posted by John Burke at 18:31