A few photos from earlier this morning. We went into Blackpool for breakfast with Gill and Eddie and David and Jeannie and I took the camera along with me to capture the current chaos, hopefully to be short-lived and worth it! 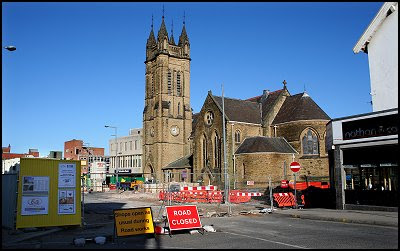 The main road in front of St John's church, Church Street has been fenced off and the road itself and the area in front of the church which had a couple of grassed areas and a wide pavement has been taken up for re-design and relaying as part of Blackpool's town centre regeneration.

The area once had the graveyard of St John's which is Blackpool's main parish church, before the graves were moved with the creation of Layton Cemetary a mile or two out of the town centre. 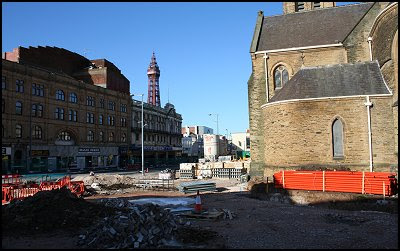 Even so there had been a few graves remaining around the side of the church in Cedar Square and as workmen dug down they found an extra unexpected burial. They are trying to identify the remains, of a young woman, before reburial at Layton.

New street lighting has already been erected down Church Street with some rather strange lamp posts, that lean over so much I wonder how many non-concentrating folk will crack their heads or shoulders on them as they walk past... The lights themselves are the projection kind that I would have thought more suited to a disco than a main street and even more worrying I'm sure I read something about a "sound system" too... I may be in danger of becoming a fuddy-duddy but there's enough shops blasting music out without the town council doing it as well...! 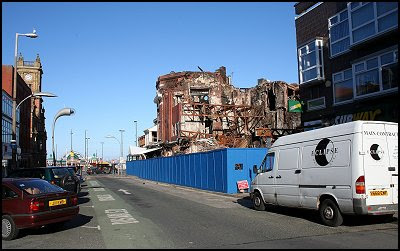 I also took the opportunity to go down with the camera to Clifton Street to take a photo of the devastation left by the fire that destroyed Yates Wine Lodge and the surrounding shops a few weeks ago. They reckon it will take 18 months before the buildings will finally be replaced and the street back to normal.

I well remember the old Tivoli Cinema above Yates Wine Lodge. My Dad and I went to see a horror film there once - Ernest Borgnine in "The Devil's Rain" which had a superb twist at the end and a really scary part in the middle - a rat ran over my foot!
Return to Blackpool Town Index Page
Posted by John Burke at 12:57