It was the annual reunion yesterday.

Alex, Jackie and I met up in Liverpool - European City of Culture for the year - to... well to get some culture, what else?

Jackie's home town, so she was in charge of venues. In the plural. More than one. Three in fact. And with scenic walks through the streets of Liverpool to get from each to the next. Some of these walks were strangely reminsicent of Disneyland ride queues... as in we zig-zagged up and down streets trying to find where we were going.

Let's not get too far ahead. I was first on the scene at the Fly in the Loaf, an atmospheric pub, which...didn't look open... Ah, wait - as I was on the phone to Jackie the shutters went up!

Jackie walked round the corner, we got a drink, Alex walked in and we yattered as we always do on these occasions - about anything but school funnily enough. Considering we were all friends at school, school didn't come into the conversation much. Old friends got a mention but most of the day was about what we are doing these days, hopes, aspirations, life.

The menu was a bit sparse so Jackie took us to an Italian - a good find, excellent food, haven't clue what it was called or where it was... So a great meal and a bottle of wine which Jackie did very well out of as both Alex and I were driving. 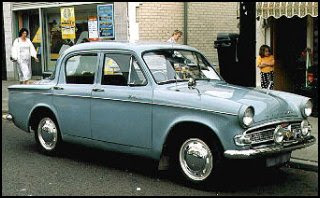 Conversation turned to a day in the Lake District thirty seven years ago. Six of us were piled into my Hillman Minx. It was a wonderful day of teenaged togetherness and fun. We were lucky in the group of friends we had. The bonds are still strong enough to draw us back every year even now.

"We were lucky to come back from that one..." Alex said. Well we skidded a bit round one corner! Six of us in that great tank of a car, no servo-assisted brakes. You put your foot on the brakes, pulled on the wheel until you were standing on the pedal and hoped for the best! No power steering either. With six people in it, steering was a test of strength! I had muscles like Charles Atlas in those days! (I mean Charles Atlas when he was a teenager - you know, the one on the beach having sand kicked in his face...)

Jackie went off to the loo leaving us with her diaries from 1970-72 to thumb through. (See, that's dedication! She even thinks about entertaining us whilst absent for a minute or two!) She was back far too quickly and took (took? snatched!) them back off us.

Then the rather less-than-straight walk as described above to find Ye Cracke, Liverpool's oldest pub, which we did eventually find after asking someone. How do you ask where a pub called "The Crack" is without it sounding as though you want to buy something? Must have looked bloody desperate, three mid-fifties old farts looking for transcendental spacial experiences...

Anyway here it is, loaded with atmosphere, dark, seemingly built of wood and glass - stained glass too and the three old farts on a mid-fifties version of a pub crawl. "Three diet cokes please..."

A great afternoon guys and many thanks to Jackie for acting as hostess with the mostess! 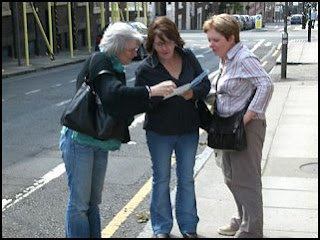 As a follow-on, Jackie left the following comment which I now transfer to here :-

Hi John,
Funnily enough not two months ago I was snapped looking at maps to work out exactly where said pub was and have pic which I will send...

Oh and don't forget you are charged with finding out about the Heywood reunion in September!
Posted by John Burke at 07:58