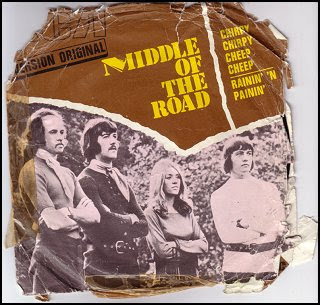 I've been saying for ages, "I must tidy up, I must throw stuff out, I must clear some space..."

But then the little horned side of me says "You can never have too much stuff..."

I went in the second hand records shop today. By-product of having started the day talking about records... Came out with a handful of 45s and an LP. Ha! Look at this though! How do you get a record sleeve in such a horrendous state? It looks as though it's been chewed by the family's dog or something. But the record seems ok. (I'm not referring to the content now, ok?)

Aw, come on! It roared to No.1 in the charts when it came out! Was it the catchy tune? The naff lyrics? The curiously flat intonation of singer Sally Carr?

Agh... I've just listened to it. It really is awful isn't it? But even so, part of me wanted to sing along! This is the Spanish version too. It's the standard song in English alright, but the sleeve is written in Spanish. It's not clear if that is Spanish or English Sellotape that was so clearly a last ditch effort to hold the cover sleeve together. Failed! 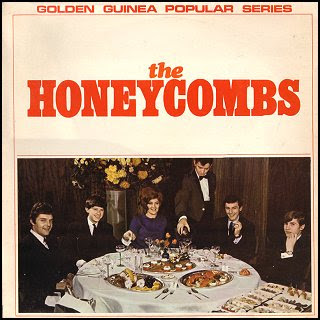 This is the album I bought. After going down to Babbacombe to see the current line-up of The Honeycombs in concert, I've been wanting to listen to the originals of their songs and, I'm afraid, the only one I had until recently was the big hit Have I The Right (to which the correct answer is "Yes and it's a match for the left").

A few weeks ago I found an old battered single of That's The Way but it is more crackle than honeycomb so it was with relief that I saw that this 1964 album includes that excellent track. So, let's give it a play!

I'll work on this folks - the tracks I have heard mean it will be worth a careful immersion in water and then a few hours scraping sludge out of the grooves! Oh... I'm supposed to be spending my time tidying up aren't I...?
Posted by John Burke at 16:52