Someone gave me a nudge the other day and said "It's ages since you did an entry about coin-slots and pinball." They were right too - so here's one I didn't prepare earlier... 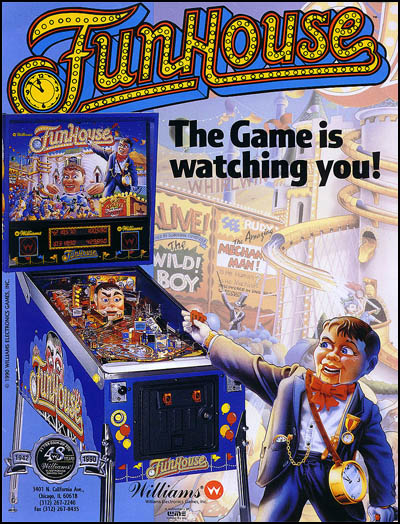 Funhouse was a brilliant game. Produced by Williams in 1990 it had an animated mannequin head on the playfield whose eyes swivelled towards whichever target had last been hit by the silver ball so it appeared to be watching the ball. Using an extra flipper positioned on the left hand side of the playfield halfway up, it was possible to send the ball to hit the head upon which it would say "Ouch!" and "Stop that!" in a very aggrieved tone! If you could time the shot to hit the mouth whilst it was open (you could get him to go to sleep upon which his mouth opened to snore!) then the ball disappeared down his throat to the accompaniment of a gulping noise and he came awake hurriedly and "heaved" the ball back at you with an appropriate sound effect to start a multiball sequence. 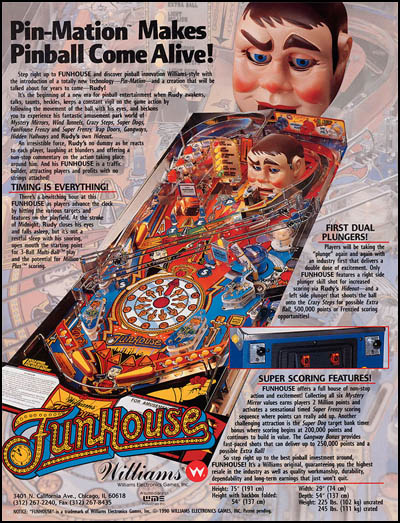 It had two plungers also - a second plunger on the left came into play if you could get the ball down a particular chute. Extremely funny to play, lots of skill needed to get some of the trickier shots and superb fun. One of Williams' staff told of the time when he was alone in the factory with lots of the games plugged in on test and in the eerie silence every now and then a voice would come from one of the games to say "I'm watching you"!