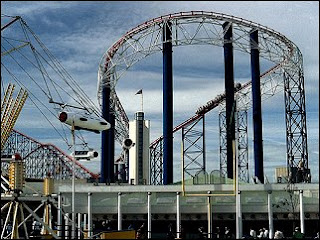 Several years ago I bought a film scanner to be able to scan all my old slides or transparencies.

Once I started I found that I could get much better scans of the black and whites and colour negatives than I achieved by scanning 6"x4" photos so started to work my way through them. An almost never ending job as I have at least 30,000 negatives!

Every time I think I'll just choose the best ones I always realise afterwards there was another one I missed out that I want to see so I started scanning them all. It will take years of course as I could spend all my spare time doing nothing else.

The sad bit is that as I got into digital photos early on there's a gap in the 1990s where I stopped taking photos on film but the quality of digital wasn't up to having full-screen sized shots. Nothing I can do about that now!

The one featured was taken on my Canon EOS 500 in 1995 and shows the then new "Big One" (then known as the "Pepsi Max Big One" - sponsorship and greed don't make for snappy names or titles!) and the 1904 Hiram Maxim Flying Machine.
Posted by John Burke at 07:26