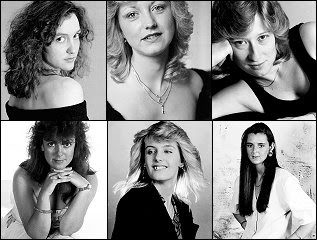 Ooh, an email flooded in from an old mate today, Billy, who asked, "Remember all those photos you used to take of gorgeous girls at the Photo Society?"

No, absolutely not, Bill... Ah that's going back a while. I was President of Blackpool & The Fylde Photographic Society in 1987 or 1988, not sure now! It sadly closed during the 1990s I think - hopefully nothing to do with the fact that I'd been a past president!

There were some real characters, and I particularly remember the studio nights where we had a model or two. I got press ganged into finding some of these but honestly folks, none of them were ever students at a college where I've worked! Important fact related to staying in employment! - although I have to admit it has been many years since I did any serious portraiture.

Staff of colleges were a different thing though! So there's a few colleagues in the photo above! Linda (top left) and Bridgette (bottom left) came from Preston College, Carolyn (top right) came from Blackpool College, Christine (top centre) was the daughter of a work colleague from my Cash & Carry days, Fiona (bottom right) was a fellow student when I was on a course and Donna (bottom centre) was a member of the photographic society.

There were a few members who turned into gibbering wrecks almost as soon as they were confronted by a pretty girl and a few girls who responded by immediately getting very nervous! There were some who almost every photo came out a cracker and others who I can't look at now without cringing! My lips are sealed! But of course the ones featured could never look bad! There's only Carolyn that I've seen in the recent past, I hope they are all as lovely! Ok Chuck? Not going to sue or anything...? :-)