Sunday 30 September 2012. We left the Aviation Museum at lunchtime and headed for... a transport museum!

We have visited the East Anglia Transport Museum several times before at Carlton Colville near Lowestoft and it always delivers a good afternoon. 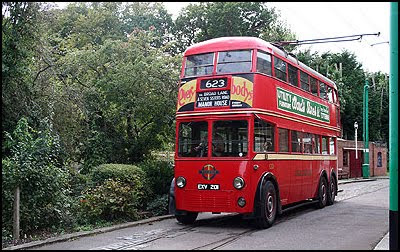 There are both trolleybuses and trams to ride on and here's one of the trolley buses - a London one, or a Leyland one depending on whether you are talking about the place it worked or the make... Yes, alright, I'm being too clever for my own good... Note the double wheels at the back. London was well represented as one of its trams was trundling about as well. The other tram shown here is from Amsterdam and had to be slightly modified with a reversible turning pole. The tramway in Amsterdam has loops at either end so the tram poles are fixed and the trams can only be driven from one end. To run this at the museum not only did a reversible pole have to be fitted but a second driving position at the back of the tram! 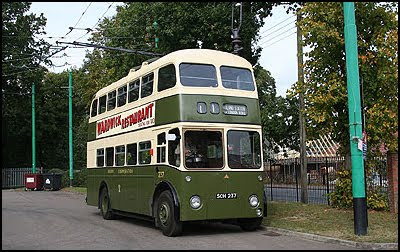 This is an ex-Derby Sunbeam F4A Roe trolleybus. It was our first ride of the afternoon and once we got off it, it was reversed to a parking position and the London bus took over. 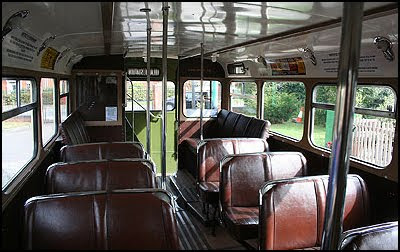 This was taken from the lower deck looking towards the rear of the bus and the entrance and exit platform. There are a couple of Blackpool trams there as well. One is a Standard tram of which Blackpool still runs at least one as part of its heritage fleet. The other is this one. Although it looks familiar it is fairly rare as it is a Vambac tram. The mechanism was a bit troublesome on these and they had a relatively (for Blackpool: a very!) short life.