Monday 1 October 2012. After leaving Sheringham we drove around the coast back to Great Yarmouth for our final evening before heading back to Blackpool on Tuesday.

On the way out I had taken a wrong turn and ended driving through the town of Caister instead of using the bypass which affords a view of the castle, which we have visited many times, but which closed for the winter season the day before we came down to Norfolk! 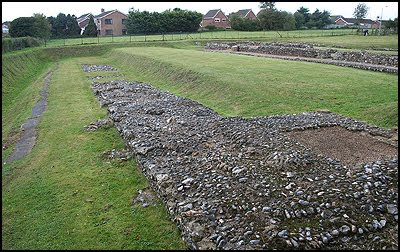 I was intrigued to see a brown sign for "Roman Fort" and glimpsed some low walls of a familiar type behind the hedge. So on our way back we passed through the town again and stopped in the lay-by at the side of the site. 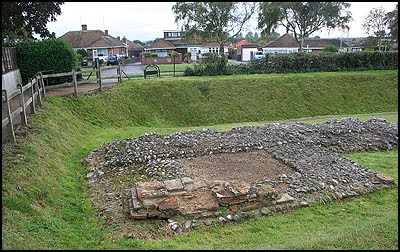 The fort was built around 200AD to the Roman standard plan. It defended the huge estuary of four rivers, the Ant, Bure, Yare and Waveney. The land it stood on was a small island at the time to the north of the estuary which covered a large area to the south now covered by land. In fact, now covered by Great Yarmouth...

We are looking at the foundations for one of the gate towers. We are inside the fort and the gate was to the left of the structure with a similar but mirrored tower on the other side. The line of the wall runs off to the right and beyond is a ditch with a deeper ditch which has been filled in and would have been under the modern roadway. 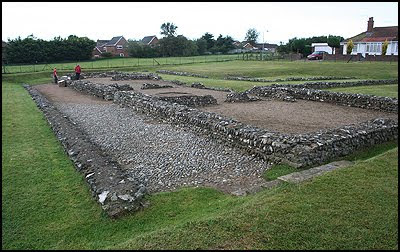 Some of the building foundations from inside the fort. After about 60 years another fort was built on the opposite shore of the estuary at Burgh. This has also been partially excavated and can be visited or seen from the many cruises up the River Yare from Great Yarmouth's dosckside area.

The site is owned or managed by English Heritage and there is a page with a map of the area at the time and a reconstruction of how the fort might have appeared from the air as sketched from an original roman Tigus Moth... Go to the link I have provided then search for "Caister roman fort"

Well, that concludes the entries about this holiday weekend - I'm going to have to go somewhere else now!