18 August 2001. If you have been following the Amsterdam weekend entries, you will know that we have just left a diamond house where I left with a diamond chunk I hadn't paid for.

It was never going to make the trip home and indeed, as soon as I got outside and checked the end of my finger, it had fallen off with virtually no chance of finding it. 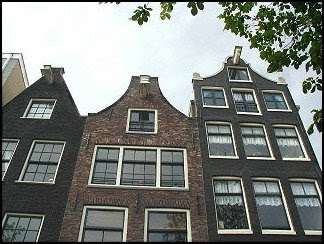 The wider a building the more expensive in the 17th century. So consequently all buildings are very narrow and somewhat tall.

This means that the space available for staircases is very limited and they are certainly not wide enough to carry furniture up and down four storeys, so houses were built with a hoist at the top so that furniture could be swung up the exterior and in through a window. 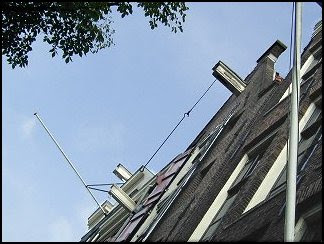 Some of the houses were built leaning forward so that furniture didn't attempt to enter a window on a lower storey than it should... It is said the old Amsterdam wives would hoist drunken husbands up this way but then forget to swing them into the building until morning when they had sobered up... Ah yes... the old Flying Dutchman story...! 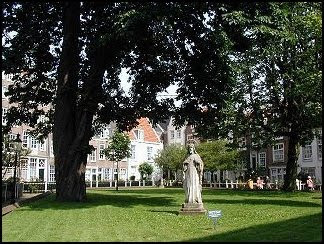 The Begijnhof began in 1346 when the buildings around this green were endowed for Catholic women who wanted religion but not the strict life of a convent. There were some habits they couldn't do without obviously...

The old church is still there and the only surviving wooden house in Amsterdam can be found on this square. 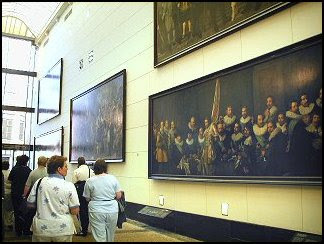 Leaving the Begijnhof, we walked down a street with a few paintings by the Old Masters displayed on the walls. This is in fact a roofed gallery with free admission and the subjects are Amsterdam's most important citizens, or at least the richest, as they had to pay for the privilege of being depicted in these large group portraits which were painted by Rembrant, Hals and other great painters of the time. It is known as the Civic Guards Gallery. 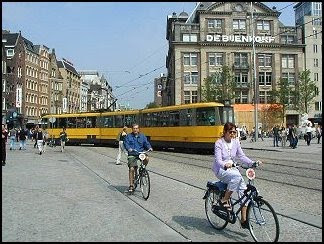 And so we came to Dam Square with the Royal Palace and trams.

Amsterdam is a city of bicycles. They are everywhere - 600,000 bikes for a population of just 800,000. When the other 200,000 want to ride a bike they simply pinch one. Bicycles can be bought more cheaply than a lock... Some roads have bicycle lanes, meaning they may come from the opposite direction you would think.

When crossing a road you must make certain to look, because the bikes, of course, are silent and usually ridden at speed and the majority of them, for some near-suicidal reason, have no brakes... We saw several near misses in the course of just this one day!

Here our guide, Christine, leaves us to find our own way about for an hour or so and we are armed with a map and the intention of finding Anne Frank's House. Meanwhile we are in search of a loo, Dad refusing to use the handy street conveniences... 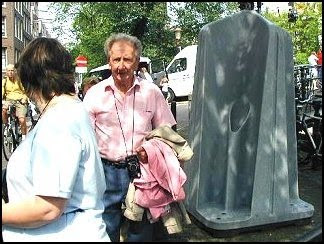