Marmaris by Night - and Day - and Night

Monday, 16 August 2010. The generator problem on the Thomson Celebration hasn't been fixed. The engineering team will work through the night and then assess things at 7:00am. Well... worse things happen at sea, as they say! 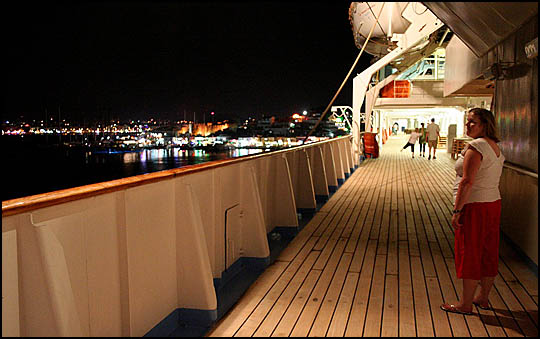 Meanwhile we shrug and have a look around the Promenade Deck at Marmaris by night. There's not a huge number of people walking around the deck - 5x round which equals one mile. 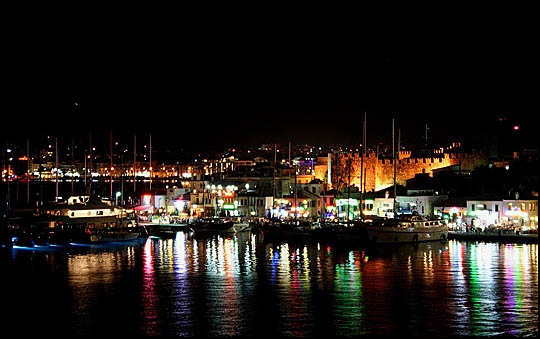 The castle is floodlit and the clubs and bars are all it up. Even the Turkish carpet shop is floodlit! In the marina some of the more impressive boats show signs of life, even if it's only the owners relaxing and reading the newspaper. 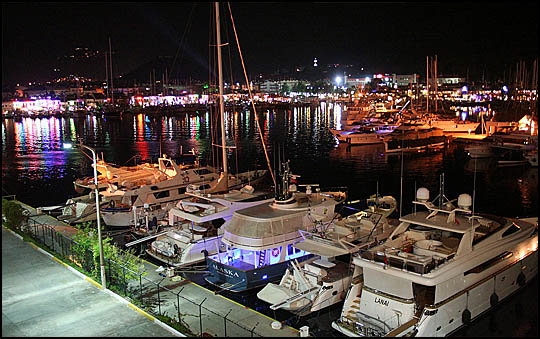 Onboard the ship the entertainments team were gearing up for their first night. As with most ships there was a variety of entertainment onboard with a West End style show every evening, a programme of quizzes and game show formats to join in with, a classical duo of violin and piano, a four piece band from the UK who had some excellent harmonies and a duo called 2 Intense in our favourite bar, Horizons. 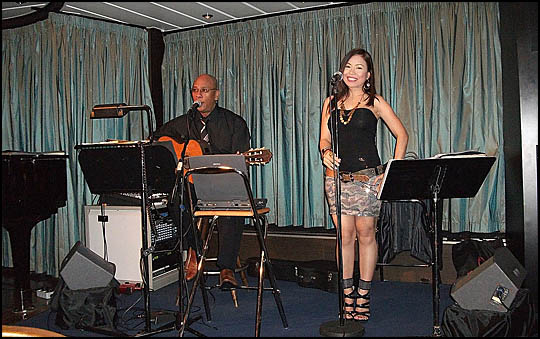 2 Intense were Tomas and Maris from the Philippines and when we first saw them we were sitting well away from the stage near the front windows of the bar. Maris announced a Carpenters song as their first number and I thought "Ooh... that's brave!" But when she started to sing you would have thought Karen Carpenter was in the room! She had a beautiful voice. And the rest of her matched... There will be more about Tomas and Maris in later entries as we got to know them and became good friends. In fact, they were so good we didn't see a single show in the main show lounge all week! Maris even claimed that singing a Carpenters song was her way of relaxing... 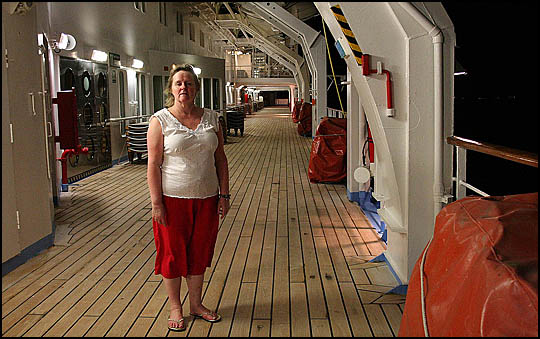 We had been up at 3:30am. So it wasn't a particularly late night for us!

17 August 2010, 12:00 noon. The engineering crew have fabricated a new part with the help of a local engineering firm. This is quite a feat I'm sure, having seen a similar repair on one of those fly-on-the-wall programmes set on the Costa Serena cruise ship. And given where we were, trying to get a spare from the manufacturers would have perhaps taken just a little longer. Next update at 6:00pm. 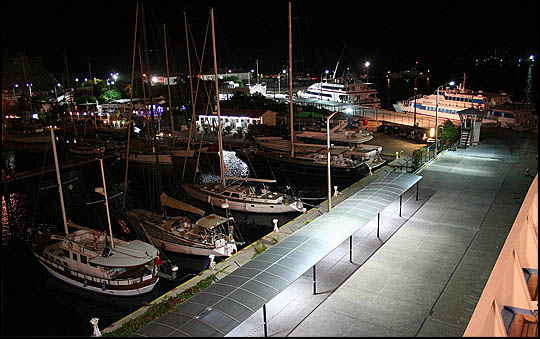 17 August 2010, 6:00pm. Hoping to sail at Midnight. There's a revised itinerary. After an extra day in Marmaris, tomorrow, which is Wednesday will be a day at sea. Thursday will be Istanbul, currently 321 nautical miles away as the crow swims. We will stay in Istanbul until 5:00am on Friday to allow people to savour Istanbul. Then Friday will be another day at sea but with a slow pass through the Dardanelles and a commentary as we pass Gallipoli and the monuments to the fallen of World War One. Saturday will be Kusadasi for Ephesus and Sunday will be our final (and only the third) port call in Santorini. So both Troy and Rhodes are off the plan. There's a slight atmosphere discernible and several passengers are seen to be counting on their fingers and shaking their heads.

Now all things being equal, one day lost would only equal one port lost. When you think about it though it requires ports to be able to accommodate an extra ship on a day it wasn't expected and for something like 12 to 15 coaches to be found for excursions to places that can cope with the extra numbers. So perhaps not all that straightforward.

To be honest, the ship's crew didn't really explain the loss of an extra day all that well. It was me who came up with the above arguments for instance. So from that point on the restaurants and bars all had their share of would-be lawyers preparing their case for compensation whilst we just shrugged and watched them ruin their own holidays by working themselves into a frenzy of indignation. There were even conspiracy theories that it was a ruse to save fuel - ignoring the fact that Istanbul was the furthest port and we were going there anyway and would pass within spitting distance of both Dikili and Rhodes. 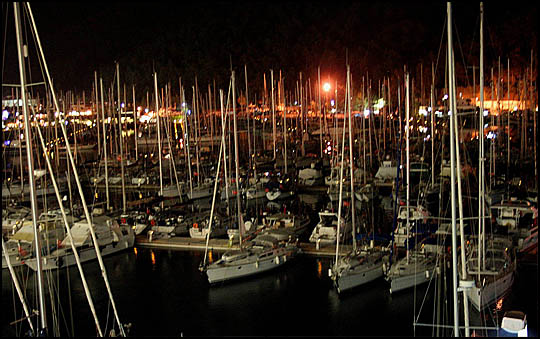 17 August 2010, 11:30pm. Coming out of Horizons bar, still miles away from the stage but having enjoyed the music.