Creeping Bentgrass at the Globe Arena 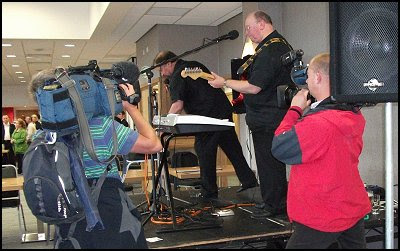 We were filmed by a Sky Sports News crew, playing before the match.

I had a little trouble with feedback through the guitar for some reason - never happened before but the ceiling was very low where we were and there were accoustic panels next to us bouncing sound back so I suspect it may have been that. We set up in a corner during the match, coming off the stage area and it improved enough to allow us to play a decent volume with a clean guitar sound. 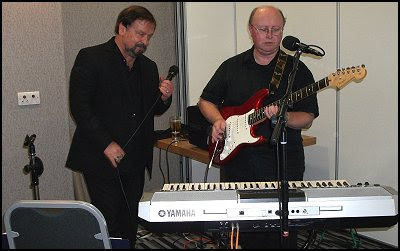 We had to keep away from anything requiring fuzzed guitar but we have over 6 hours of material to draw on and we played for only a couple of hours after the match.

We got some good feedback (from guests and staff rather than the unwanted sort) and picked up another booking for a wedding and are back at Morecambe FC for a pre-match spot on Saturday! Morecambe won their match against Coventry 2:0 so it was a winning night all round!
Posted by John Burke at 10:09