19 August 2001. After the hustle and bustle of Amsterdam yesterday the coach takes us to Marken, a small village of green painted wooden buildings on the coast. 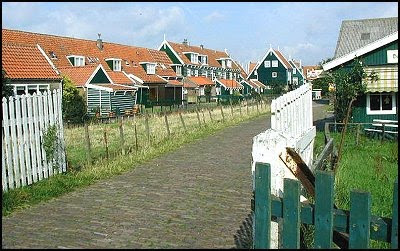 This, we were told, was one of the places where the Dutch people still wear their traditional costumes. Ooh-er! But doesn't that make it the place where Barbara Parkins was stabbed to death with pitchforks in mid dance in the film of Alistair MacLean's Puppet on a Chain?

Anyway, we didn't see a single one. To be fair, it was a Sunday morning and they may have all been in church. 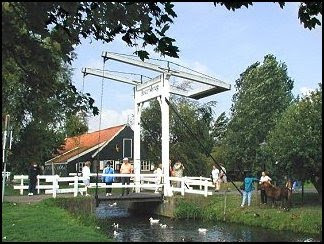 There was a drawbridge over the canal to enter the village, though whether it had been built as a defence or just as a means of letting masted boats pass I'm not sure. 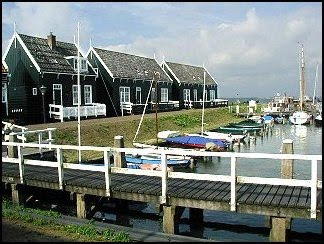 Marken has the look and feel of a village where time has frozen. Apart from the tourists off the coach there was hardly a living soul to be seen. Eerie! They were all probably kneeling on their beds with their noses peeping between the crack of the curtains whilst from within the room a plaintive voice falters "Have they gone yet?" 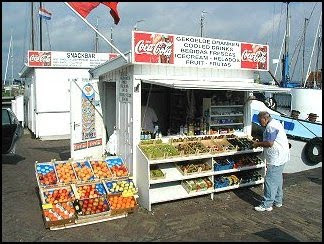 There was a fruit stall open on the harbour - a picturesque but wind-swept place where you huddled against the cold even in August. The proprietor looked disappointingly normal... No pitchforks or anything...
Posted by John Burke at 09:06