The Blue Mosque of Istanbul

Thursday, 19 August 2010. Following a day at sea, the Thomson Celebration sails into the Bosphorus and moors up opposite the Blue Mosque and Hagia Sophia just into the Golden Horn. We are booked on an excursion called Taste of Istanbul. We board a coach which drives over the bridge on the Golden Horn with some fabulous views to either side. 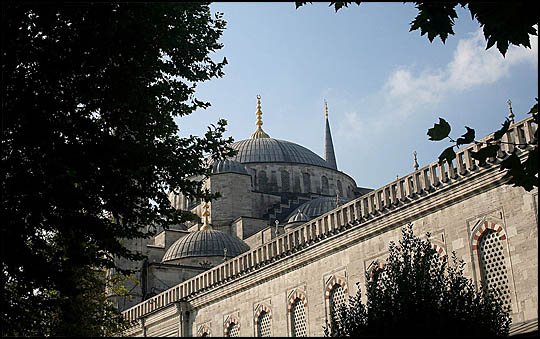 First stop is the Blue Mosque. Built between 1609-1616 by Sultan Ahmed I, the first thing you notice is that it's not blue... It was named for the blue tiles inside...which are set amongst a lot of red tiles too, though there is a bluish tinge inside! 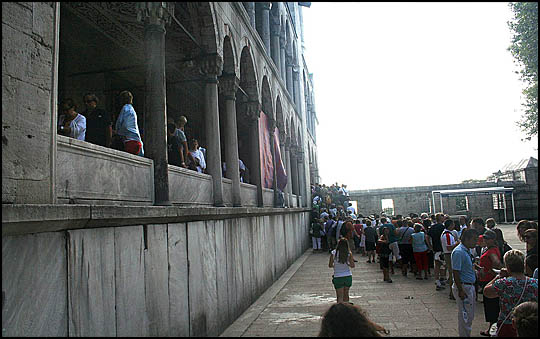 Whilst a huge visitor attraction, it is still in use as a mosque and visitors must take off their shoes to enter. This is the queue to do that. People on the balcony to the left are taking off shoes and placing them in polythene bags that are provided so you can carry them about. Some twit of an American behind us can't wait and shouts up for some bags to be dropped down. A bag floats down and he calls up "No... a roll, a roll!"

"You want a full roll?" comes an incredulous voice from above. "Yes!" A huge roll, about two metres long and half a meter in diameter with probably over a thousand bags crashes spectacularly to the ground. The American has a near heart attack. "No! Not a full roll! Just a few bags!" He actually wants to throw the heavy roll back up! But the bloke at the top is not about to try to catch it.

"Piss off!" comes an indignant comment. "You got what you asked for!" Ah... Britain can still be Great sometimes! 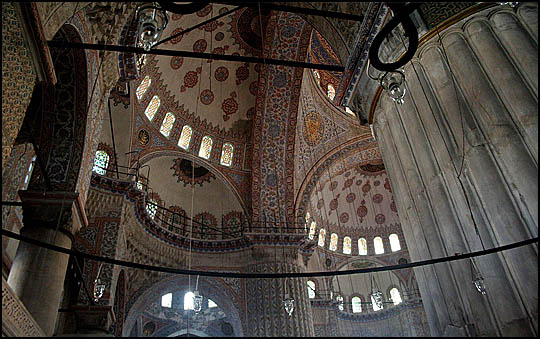 Inside the decoration is wonderful. It's a bit dark inside. Windows, although small, are full of stained glass and ceilings are tiled with patterns and calligraphy. 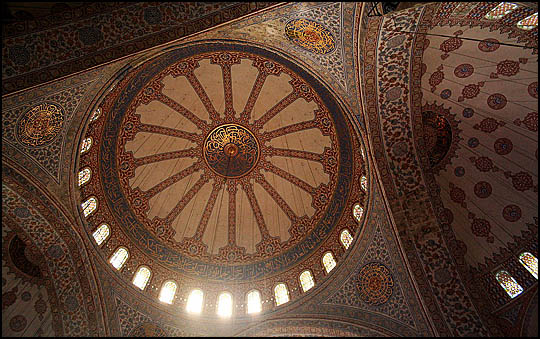 The price to be paid for the tiles was decreed by the Sultan. As the years of building went by and the price of tiles increased with inflation, the Sultan would not be moved to increase the budget. This meant that the higher they built, the poorer the quality of tile was all that could be afforded. Therefore reds have become brown and other colours have faded accordingly. 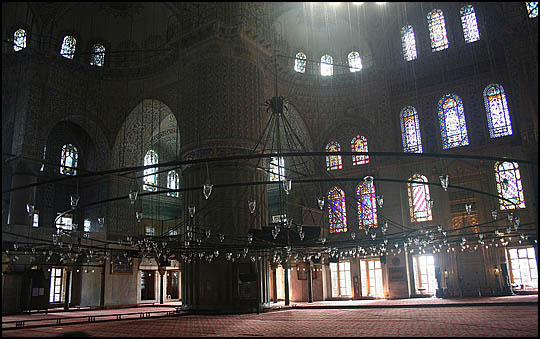 The prayer area, the vast clear floorspace is lit by a huge chandelier hung from the ceiling. The glass light holders were once richly hung with gold and jewels and ostrich eggs. The latter were there to repel spiders and thus keep the chandelier free of webs. The carpet was new and is regularly replaced as carpets become worn. It had darker stripes woven into it to enable those praying to form neat lines facing Mecca. 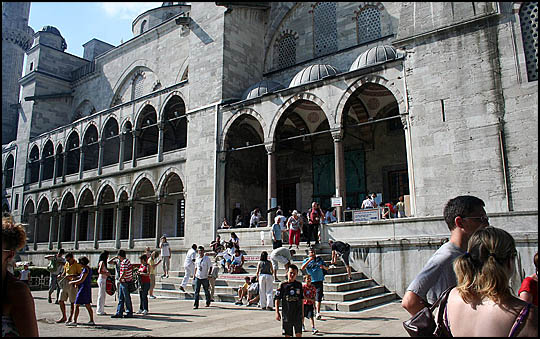 We left the Blue Mosque, everyone sitting on the steps of the exit to put their shoes back on. It was only when you stood up and went down into the courtyard and turned for a last glance at this beautiful building that you see the signs written on the facings of the steps... Do not sit on these steps! 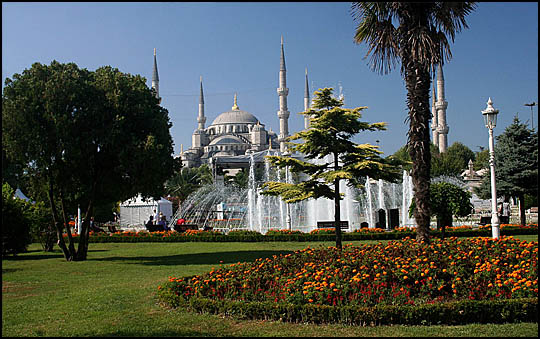