Another Day, Another Gig in Garstang!

It's been our final appearance at the Garstang Arts & Music Festival for this year today. 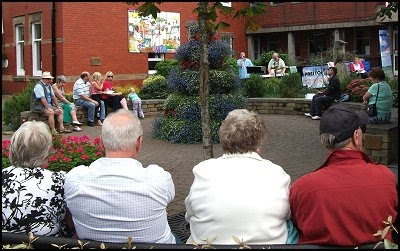 Today was rain free I'm glad to say. The keyboard display was exhibiting some rather disturbing symptoms after Saturday's rain and I'm going to have to get it looked at.

Now at least that is recogniseable, but the displayed name for the specially created style for Kites, which I play live on the keyboard was totally obliterated by meaningless symbols.

Despite that the sound was ok and we had a fabulous day playing non-stop from 11:30am through until 4:00pm. The circular garden before us had all seats taken throughout and the garden on the opposite side of the road remained full and there were lots of people standing to the side and even parking up in the car park with windows down to listen, whoop and wave at us! It's very gratifying when people come up to say they have travelled quite a few miles just because we were appearing! Hope to see you again next year!
Posted by John Burke at 20:49