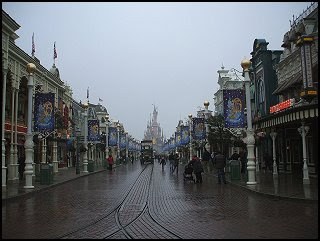 In the words of the old song: "I love Paris in the Springtime".

It's winter. It's icy cold. It's throwing it down with rain. But hey! We're in the magical environment of Disneyland, right?

Well... right... but I do have to observe that the magic is diluted a bit by a day of non-stop rain! As I noted the other day - there is no evidence and no chance in the rain of street corner musicians to cheer us a bit and so we trog round the park, getting wetter and colder and footsore. 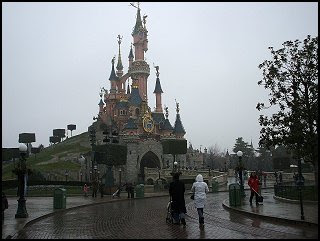 The rides were still as great as they always are - we headed first for the Pirates of The Caribbean and then Peter Pan's Wild Flight and Pinnochio.

We rushed through the castle on our first entry but will come back for a closer look this afternoon.

It was still fairly quiet even at 11:00am, so perhaps other guests had looked out of their hotel windows and thought "Nahhhhhh!" We were made of sterner stuff though! Well Fran is... I was pushed and prodded and "Come on we're going"ed!

"But it's cold... I'm wet... my feet hurt..." No, you're right! I was racing round splashing in puddles and squealing with delight whilst kids pointed and asked their parents, "Regardez la! Qui est le stupid homme???" 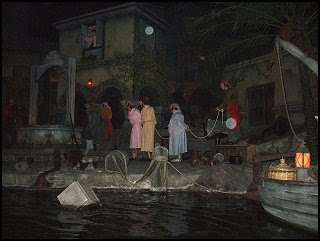 It's a bit disconcerting when Les Pirates (pronounced "pee-rats") speak in French, but you do soon get used to it.

There was a look-a-like Johnny Depp - very good indeed in fact - posing for photos as we got off the ride but he didn't recognise me, so I didn't let on to him either! The cheek!

I dragged Fran round all the bits with waterfalls but by then even her enthusiasm and immunity to rain caused her to moan that I was taking her nearer even more falling water.

She ignored altogether my suggestion we should run over the suspension bridge... 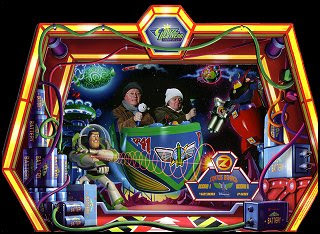 Gill our daughter had said we should make sure we went on the ride Buzz Lightyear's Laser Blast.

She was absolutely right - it was excellent. On the front of the little pod we sat in we had a ray gun each and had to shoot at various targets on aliens and the Evil Zurg as we went round. We even had a lever that allowed us to swing the pod from side to side!

Laser spots showed where we hit so we could correct our aim. Or at least so I could... Fran scored abysmally. I scored 30x her score and that was with a spell ignoring the targets to exchange deadly laser fire with the occupants of the pod in front... They got off with little wisps of smoke rising from their coats... 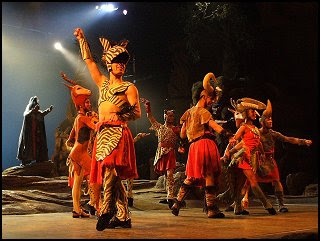 We had some lunch and then went to see the excellent Lion King show in Discoveryland.

Before the show started a team of drummers in African tribal dress entertained the audience who were sitting cheerfully dripping down the aisles until small waterfalls cascaded over every step.

The show itself had lots of dance and music and some animated characters led by a cast member, dressed in a Timon costume.

Look carefully in the programme as the show is performed in different languages, so make sure you attend the right one for you! 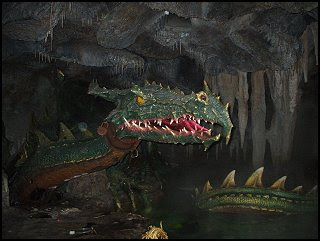 We squelched back to the castle and had a look around, admiring the crystal glass figures and watching the glass blower making some small animal character.

Then it was down into the cavern beneath the castle where the dragon woke and lifted his head, roaring his displeasure at my use of flash!

We went on the paddlesteamer, trying to decide whether it was wetter on the boat or under it.

Fast food only or not, I needed something to warm me up. Besides, Fran was planning a shopping marathon along Main St USA. I nipped in a shop myself and settled down with a coffee. Oh... and a chocolate chip cookie... Grand as owt...

It was still throwing it down with rain. We made our way to the beginning of Main St, then climbed up to the balcony of the steam railroad station. The daily parade was about to make its way down Main St and then past us.

So we'll finish with a few photos of the parade. Tomorrow will be the 31st January - last Thursday and our last full day before returning to the UK. We are planning to have a day in Paris itself. 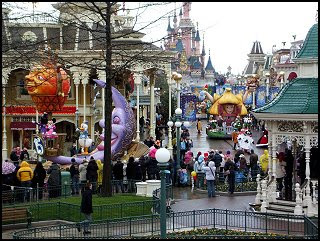 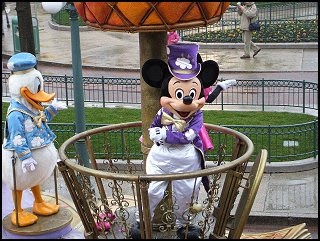 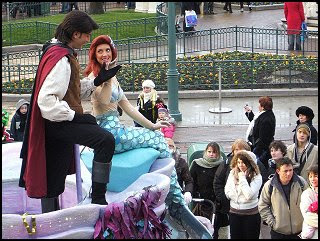 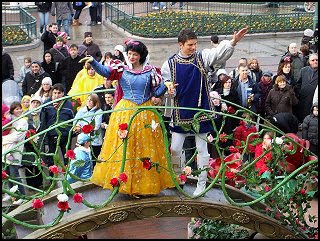