Tuesday morning, 29 January 2008, found us up, washed, and fed and back at the Disney Complex for a day in Disney Studios. This hadn't existed the last time we were at Disney Paris back in 2002, although we had visited the studios in Florida 15 years ago. 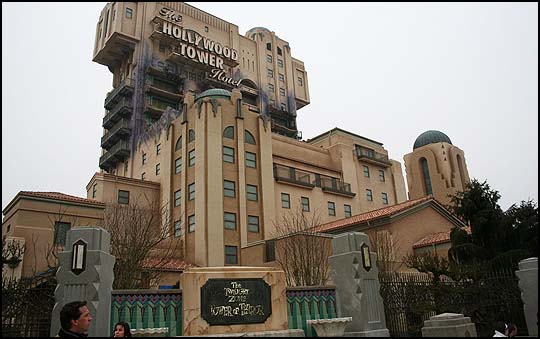 The new attraction is the Twilight Zone Tower of Terror in which you ride a lift or elevator which suddenly plunges 13 floors. Whilst it sounded fun (or terrifying) from the screams we could hear, the doctors have diagnosed high blood pressure so I was trying to be good and we didn't try it out. 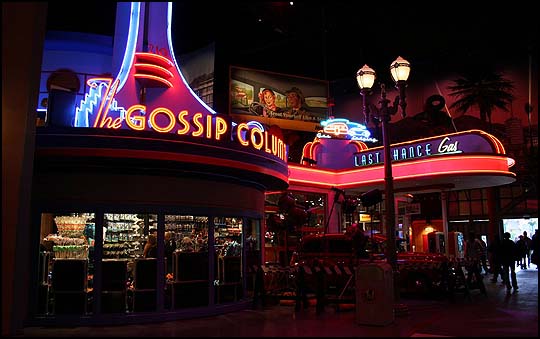 You enter the park through a large building in which it is perpetual night time. This has shops and a fast food outlet. "Fast" is a relative term when applied to food in France. They don't particularly understand why anyone would want to approach food in a rush and I suspect the vast majority of burgers bought there are by us foreigners.

In fact I did wonder over the week whether America has decided there's no way the majority of its citizens are ever going to be slim and attractive and therefore are on a mission to fatten up the rest of the world? It's almost impossible to buy anything other than a burger or hot dog to eat in the parks, sandwiches are just about non-existent and other food outlets very hard to find except for those selling cookies and cakes.

Anyway we only visited this outlet to buy drinks and it was in the middle of the afternoon. There were large queues at just two open tills out of the 20 or so there must have been. 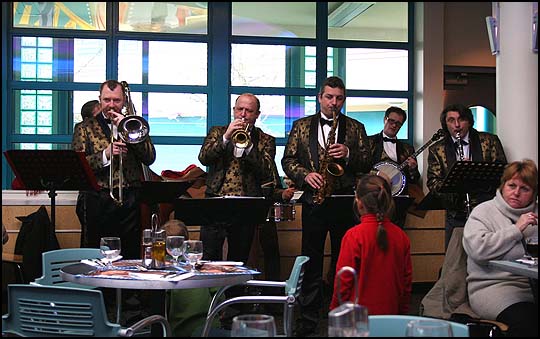 The Studios had a decent restaurant but it was an "eat all you like" buffet which meant you paid for a huge meal whether you ate one or not. It did (for a while anyway) have live music in the form of a jazz band who were truly excellent and it went some way to make up for the lack of live street entertainment that had been everywhere we looked in the Disney parks in America but had been missing everywhere we looked in Paris.

In fairness it was winter of course and no musicians could have played outdoors for very long, but they could have had a go for 15 minutes then nipped inside for a brew! Florida and California don't have to put up with temperatures measured with a minus sign in front and Disney doesn't appear to have given this much thought. Ice cream stalls were still open but I'd have given my right arm at times for a little paper cup with some tomato soup in it! 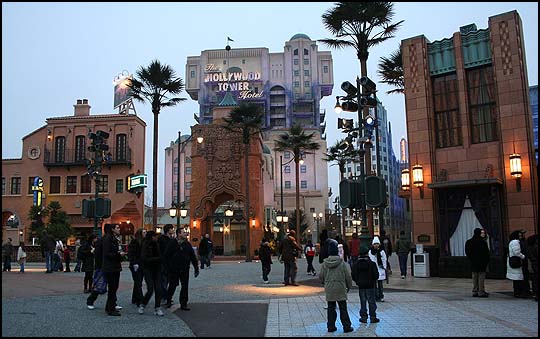 Given that I was trying to avoid going on rides that may have driven my blood pressure even higher (though we did go on the excellent Nemo ride - more later) we went into most of the show-type attractions.

CinéMagique was excellent and I'd recommend it to anyone. We also went in Animagique which was the Disney characters show. Again excellent for kiddies and entertaining enough for adults, though the somewhat random noise and laughter soundtrack playing incessantly before the show started was so annoying I'd recommend rushing in at the last minute just before the show starts! 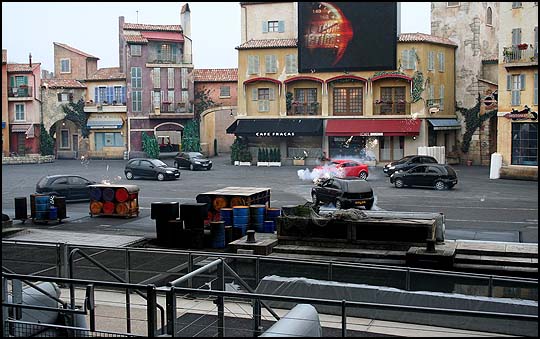 We also went in the Moteurs...Action! Stunt Show Spectacular which was well worth sitting in the freezing cold for an hour. It was absolutely superb and the stunt drivers were unbelievably good and hellishly fast in such an enclosed space! 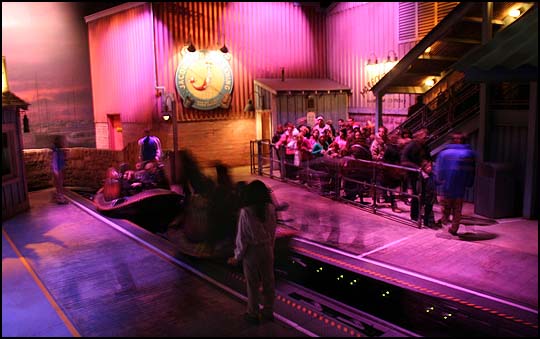 As already said, we went on the Nemo ride and had a 20 minute queue for this, though it went quickly enough, mainly thanks to the two girls in their early teens who were behind us who queued with us for 10-15 minutes then saw a sign which mentioned sudden twists and drops and there was then a prolongued conversation which went along the lines of:

...and so on for a while longer until at the last minute they reached a decision and sped back down the line of people and out before they could change each others' minds again! 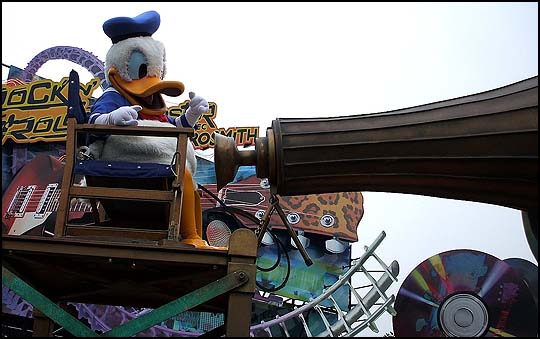 We watched the parade and I couldn't help but feel sorry for the performers who were trying to give it their all, but again in Florida and California, they do not normally have to perform to "guests" who are freezing cold and struggling against the odds to look enthusiastic and give the impression they are enjoying themselves in rain and typical European January greyness. 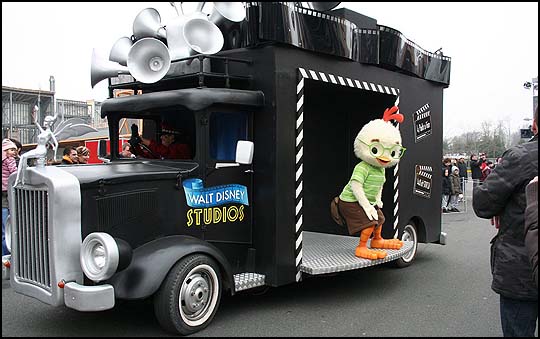 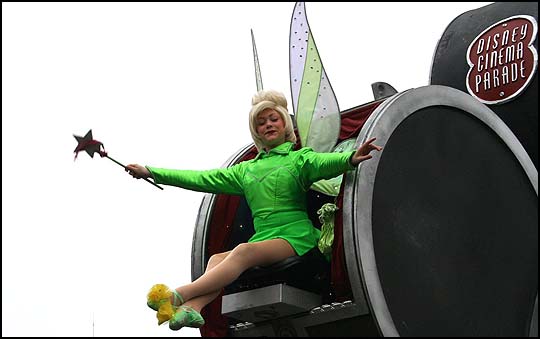 There was some consolation in spotting the tell-tale lumps and bumps of layers of thermals under the flesh-coloured tights and bodystockings! 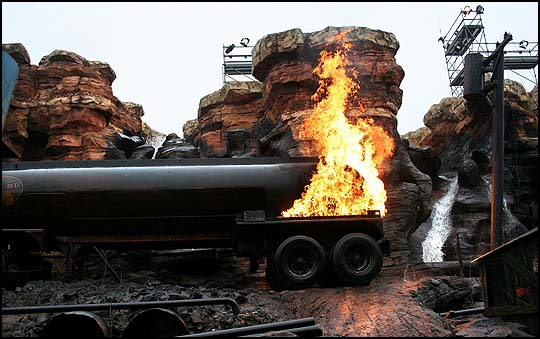 I couldn't help but think there should be more shows with pyrotechnics as I'm sure half the people on the tram tour were just there to warm themselves up a bit when the lorry explodes into flames in the earthquake bit!

And so it started to go dark. In the winter months the parks close at 6 o'clock and there are no firework displays which was a shame. 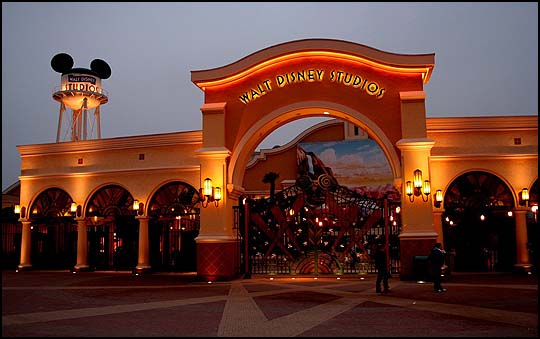 We made our way to the gates and I turned back to take a final photo, which, even if you can't find any artistic merit in it, at least gives the explanation for the shot the other day of Fran with Mickey Mouse ears! We caught the free shuttle back to the hotel with only a minimum of waiting and were soon back and heading for a meal in the hotel restaurant.