Well, of course it's not the first. In fact I wrote of one not much more than half a mile away only a few days ago. 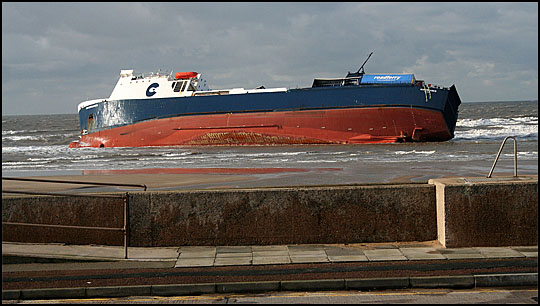 The Riverdance was hit by a freak wave in gales and was driven onto the shore off Anchorsholme during the night of 31 January 2008. Thousands of packets of McVitie's chocolate biscuits have washed ashore - presumably a little salty after floating ashore... I've not yet been able to ascertain what Burtons Biscuits factory in Blackpool have to say about that!

There's a fair bit of traffic around the area with people going to have a look. The ship is a ferry of the rear gate roll-on, roll-off type. The Promenade road is closed to traffic and pedestrians by the police at the moment. The road has been closed for a a bit as roadworks have been ongoing, but I think the police have closed it to pedestrians to try to prevent any repeat of the amateur salvage operations of the type seen in Cornwall a while ago. Certainly it's hard to understand what the risk might be that requires the area to be blocked off 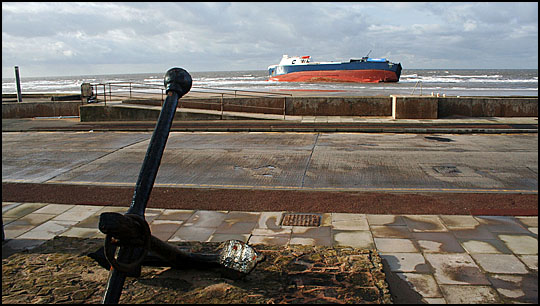 Just how close to shore the ship is can be seen from this shot, taken from the garden in front of the flats along the seafront at that point. A good viewpoint is also to be gained from Anchorsholme Park. If anyone feels the urge to go for a shufty, I'd recommend parking a bit off and walking down either from Cleveleys main car parks or from the main road parking areas between the Esso garage and Cleveleys town centre. The roads between there and the seafront were choked when I went down and as the ship is likely to be there for a while you have plenty of time.

A high tide is going to be necessary to re-float her, even if they take off fuel to lighten her as I gather is the plan.

Return to Blackpool Promenade and Beach Index Page
Posted by John Burke at 13:08