Tuesday 24 June 2014. If you've been following the tale of this mini break, you will know that we left off yesterday with a hair-raising (no mean feat with me...) bus ride from Beer to Sidmouth on the South Devon coast. I see one of my readers has commented on a worrying trend - fish guts yesterday, poo the day before that... Well I can reassure my readers that today's substance of note will be nothing worse than clotted cream! Hurray for the good guys! 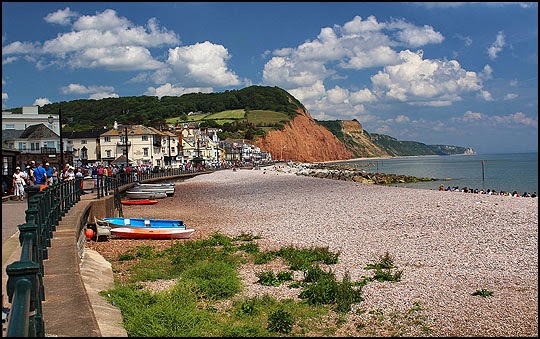 The bus delivered us safely to Sidmouth, where we got off at Sidmouth Triangle. This is a triangular grassed area formed by the almost-meeting of three roads. It's quite close to the town museum which we shall see in a moment. It was lunchtime and we walked down into the town, finding a spot in a tiny courtyard surrounded by craft shops and florists (and luckily, one cafe)! Miss Franny was fancying a Devon Cream Tea, but I always put the jam on first so we had a Cornish Cream Tea in Devon. No one pulled me up on it... 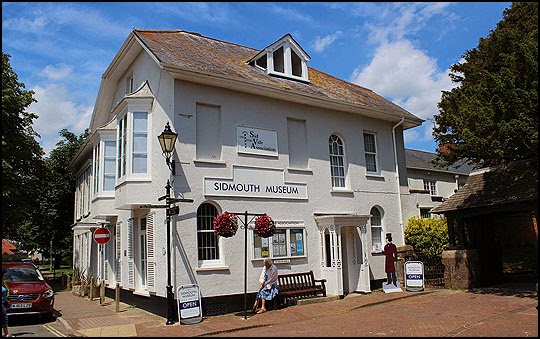 We walked off our lunch on the seafront and then headed back for the bus to see what time buses went back to Seaton. We stopped off for a look round the museum, with only a slightly hasty departure as masses of school kids came in with a few harrassed teachers and helpers for a trip! It was worth a look round with some mighty mammoth gnashers from real life mammoths. There was a large display of Sidmouth lace, made in the town by the ladies whilst waiting for their men to come back from fishing or sneaking off to the boozer and claiming it was too choppy. 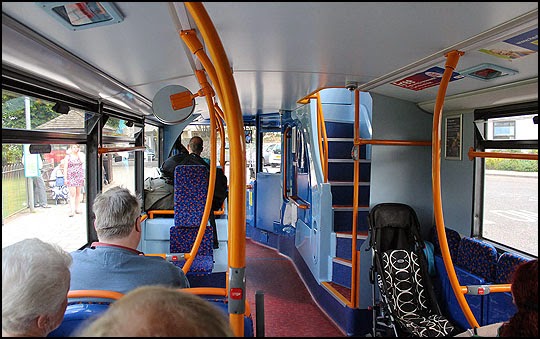 Would you believe it, there was a double-deck bus already standing at the bus stop when we got there, so we jumped on that to go back to Seaton mid afternoon, hoping that there would be a bus stop somewhere near the Seaton Tramway terminus. 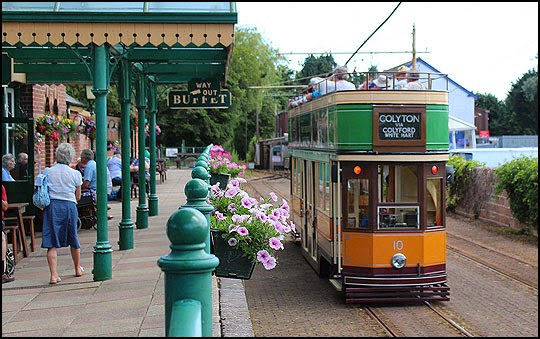 And so there was. We got off the bus with only a few yards walk to the tramway ticket office. The narrow guage tramway goes back to 1969/70 when equipment from a line that had operated at Eastbourne was moved here when road building threatened its Eastbourne site. It now has three miles of track from Seaton, through Colyford to Colyton 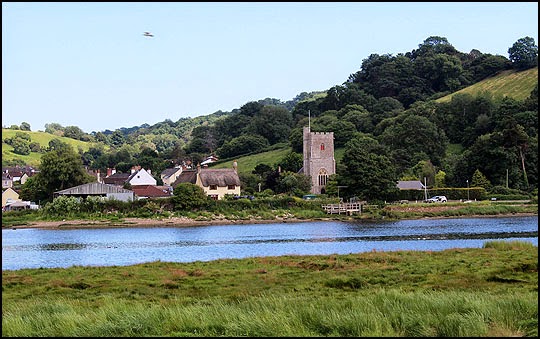 The route takes it alongside the River Axe with this view of the village of Axmouth. Passing places along the single-track route allow tramcars to pass each other. 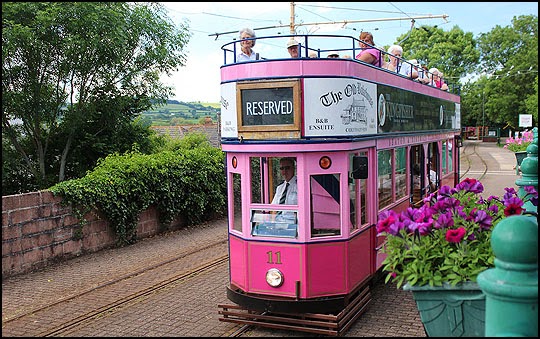 Some of the cars are original full sized trams, cut in half lengthwise and then cut down to fit the guage. This down-scaling makes for an interesting time negotiating the staircases to reach the top decks! Even I at my impressive 5 feet 4 inches had to duck down severely and coming down the stairs involves a little limbo dance at the foot of the stairs! As exciting as this sounds, no one seemed to have any great difficulty managing it! The car pictured above was painted pink in support of breast cancer charities. 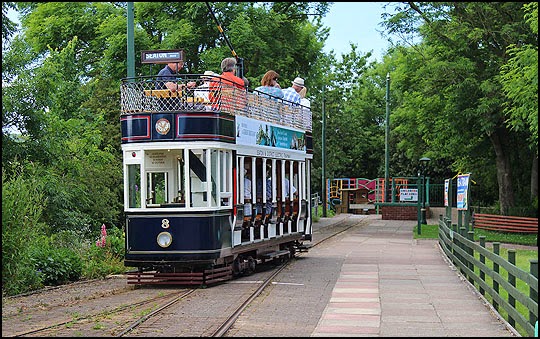 Others are painted in livery colours long since vanished in the cities and towns they represent. There is even a Blackpool Boat tram amongst the fleet! All of this started in 1949 as the pet project of a tram enthusiast, Claude Lane, whose company made battery-operated milk floats! The return trip from Seaton to Colyton and back takes about an hour. You cannot stay on the tram as it reverses direction, so as to ensure anyone who has got off to walk into the town of Colyton has a fair chance of getting on a returning tram. You can of course get off and immediately join the queue which may well get you back on the same tram unless it is really busy.

Colyton itself is a 3/4 mile walk from the tram terminus. The town dates from 837 and the Saxons. The church dates from the Normans and, when I visited in 1997, a full list of vicars was displayed inside starting at the year 1258! Also in a glass case was a copy of a book of Erasmus the Dutch cleric dating from the early 1500s. Unfortunately a modern postcard was on top of it, as a label and obscured the binding which was red leather. The book was parchment and about 3 or 4 inches thick.

We didn't bother with the walk to Colyton this time because it was already late afternoon. We had a look in the station shop and then got onto the second tram to follow the one we had arrived on. Back at Seaton we walked towards the outskirts of the town to a pub that had been recommended, but when we arrived we found it didn't open for another hour and rather than wait on a dusty road we walked back into town and sampled the fish and chip restaurant which was excellent! 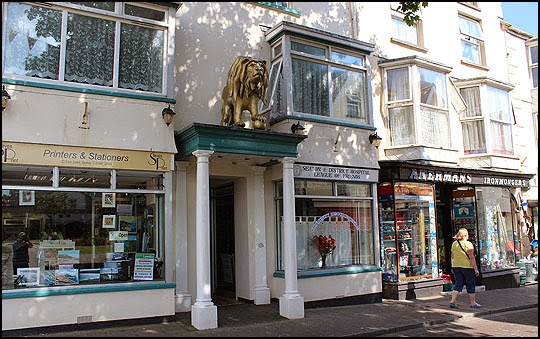 Then we walked up to a convenience store for some goodies to take back to the room and I noticed the golden lion over this doorway. 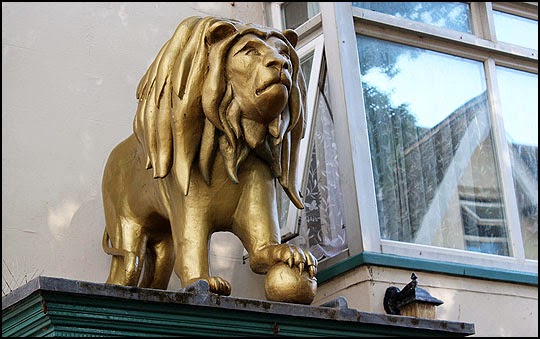 I suspect the lion wasn't carved especially for the hospital's League of Friends, it looks more like a pub or hotel mascot. I like the way it appears to be raising its hackles ready to spring! 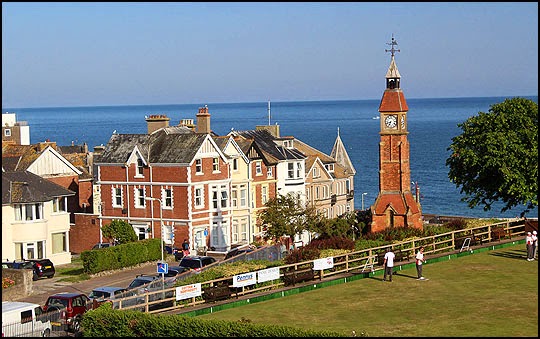 Armed with magazines, chocolate bars and drinks, we were back in the hotel and sitting in the window reading for a few hours.