Yesterday I stumbled out of bed ever so slightly late, remembering I'd said we would go down to Fleetwood as it was Tram Sunday. This is the day Fleetwood used to fill with old vehicles, buses, coaches, cars and lots of music from live bands, barrel organs and marching bands in a parade.

Today it is pretty similar except that widening of pavements to stop cars parking and the new tram platforms have taken away something like two thirds of the space for old vehicles and narrowed the road too much for a marching parade. 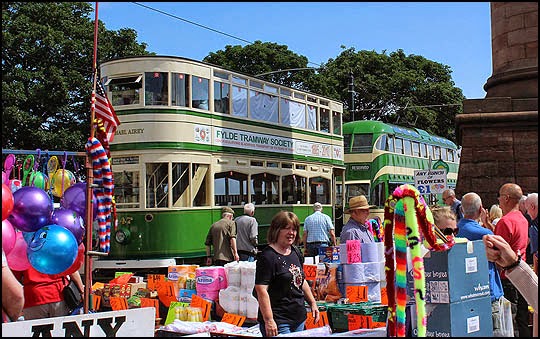 This was pretty much the sum total of tram activity too - a static display down near the Pharos lighthouse. I took the photo from this slightly strange angle because the Powers-that-Be had arranged the ugliest possible arrangement of barriers around the trams and the Victorian tram shelter to stop people from approaching or getting on the trams. I really do wonder at the mentality sometimes... At the top end of Lord Street was one of the new trams. But who wants to look at one of those...? 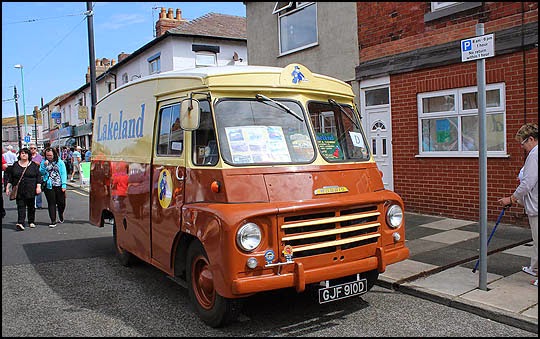 So let's focus on some of the best bits! Starting with an old 1966 Morris LD box van in the livery of Lakeland Laundries. 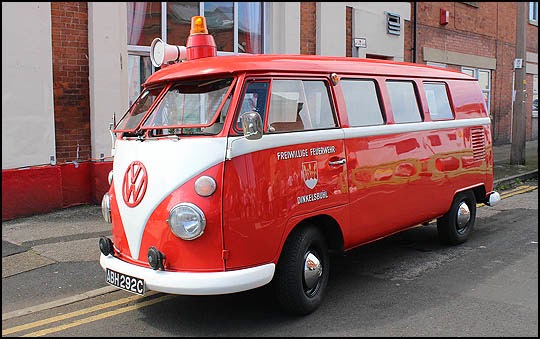 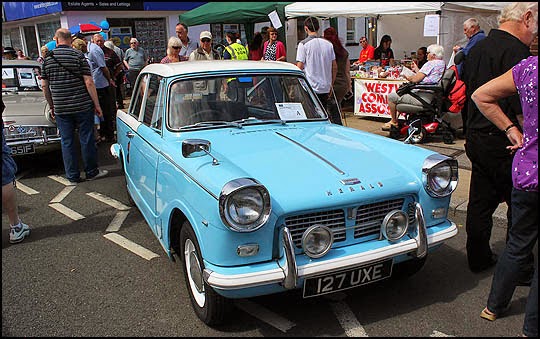 A Triumph Herald from the early 1960s when cars were instantly recognisable from their unique shape. No other car looked like this. No other car, as far as I remember, had a bonnet that opened like this... A catch on each side near ground level behind the front wheel just visible on this photo, released the entire section of bonnet and both wings which tipped forwards to stand vertically from the front of the car where a gust of wind would send it crashing back just as you leaned over the engine to find out why it had stopped... 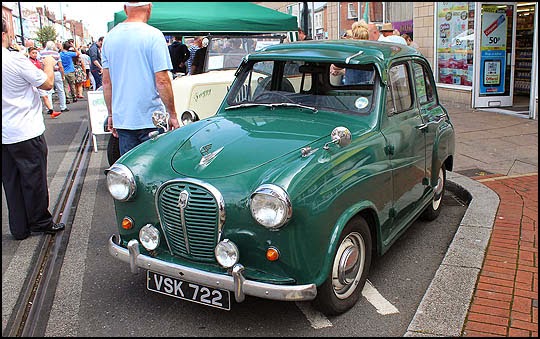 1950s Austin A35 with sun visor over the windscreen and shielding the headlights in case heavy rain washed them out of their sockets. Note the dinky little front sidelights on top of the wings near the wing mirrors. 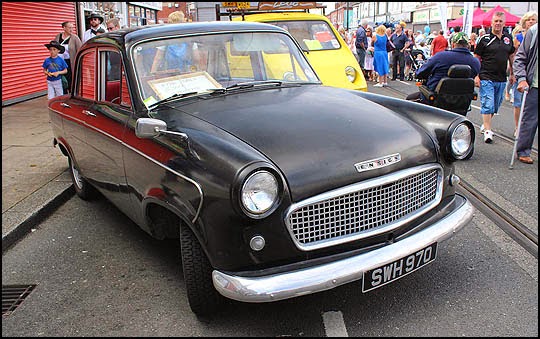 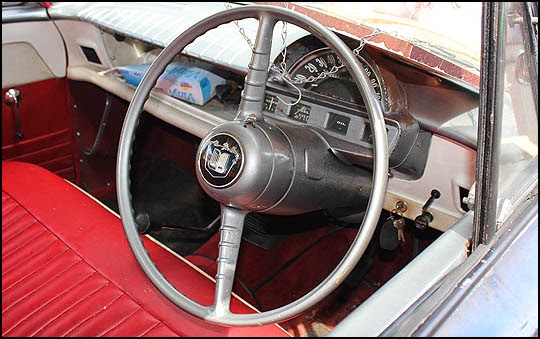 1950s Standard Ensign with both exterior and interior shots. The interior is pretty average for the time with painted metal dashboard containing most of the controls, lights, ignition key etc. The indicator switch is on top of the steering column which also has the horn button on the boss and what looks like a cover over an unused opening on the steering column. This is more likely to be for an optional column gear shift than a control stalk, but in this version the gear lever is on the floor and is long - the lever probably feeding straight into the gearbox with no linkages to go wrong! The headlight dip switch will be a toggle button on the floor also as was common through the 50s and 60s. I'm still convinced that's the right place for it - you could dip instantly to avoid dazzling oncoming drivers even if in the middle of turning the steering wheel. 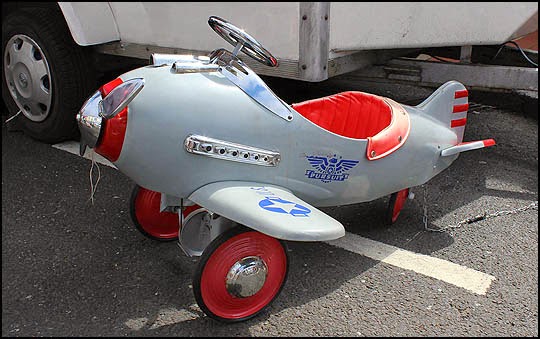 They've been around for 40-50 years, but this probably is nowhere near as old as that. A quick search found that these kiddies' pedal planes are still being made and cost around £360. Dakka-dakka-dakka-dakka... 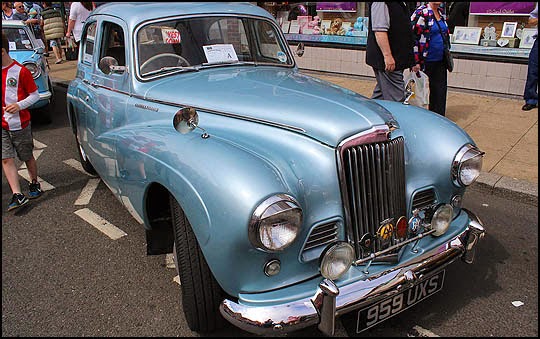 Sunbeam Talbot. Large, fast and a popular model for police cars in its time. Just imagine jumping out, truncheon at the ready and saying tersely, "Oy you blaggers! The game's up!" 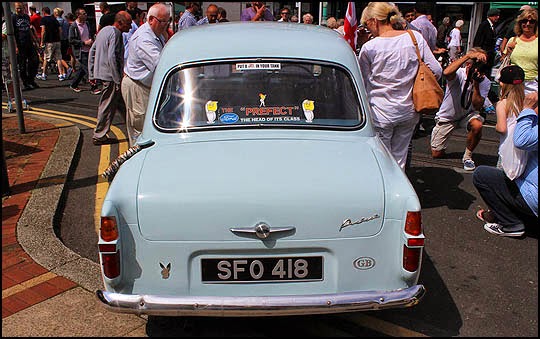 Loved this! A 1950s Ford Prefect with a nice Esso theme - the "Esso blob" characters on the rear window pre-dated the Put a Tiger in your Tank slogan and the tiger tail appearing to come out of the petrol filler was once a common sight! 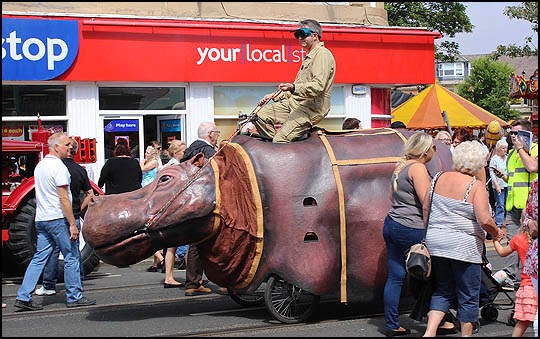 Then just when you think you've seen it all... A brilliant "hippo bike" complete with costumed rider and swivelling head. A friend on Facebook commented she had seen it in Hull a bit ago - wouldn't fancy riding it across the Pennines myself... I had a mooch around some of the many stalls selling toy cars and buses and came away with a model Burlingham Seagull coach in Yelloways livery. 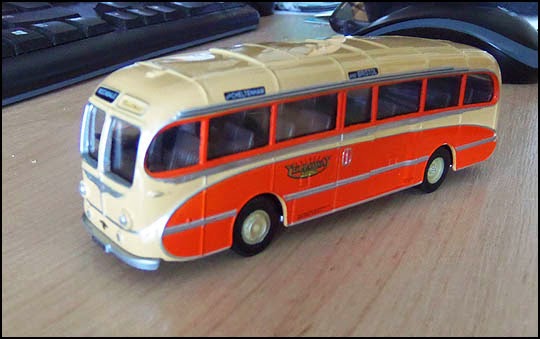 I used to go to school on one of these from the age of 12 and still remember the joy of having your school cap torn from your head and flung from a window... Despite the model seeming to have no opening windows, the real article had sliding panes at the top of the large window that allowed a bit of fresh air to come in, or articles to fly out. These coaches had a polished metal grab bar on the back of each seat for the benefit of passengers on the seat behind which, for a 12-year-old in an emergency stop situation, was conveniently at tooth height... Ah... those were the days...