Weymouth And A Giant Encounter

Wednesday 25 June 2014. We left Wareham intending to slowly meander back towards Seaton. So well did we meander that we found ourselves in Weymouth... 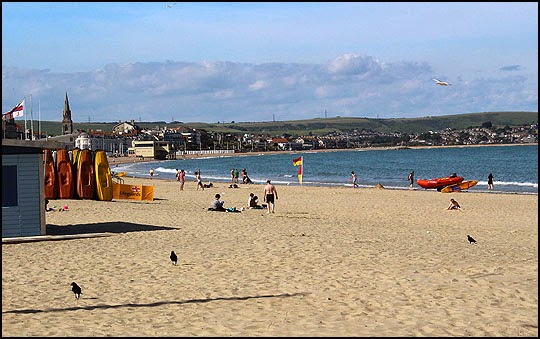 The last couple of times (the only times) we have been to Weymouth we ended up at the spot where the River Wey gives the town its name. I remember a huge warehouse called Brewer's Quay. Anyway this time we parked and a few minutes of walking brought us to a much more traditional seaside with a lovely sandy beach and even a Punch and Judy stall, though this was closed. 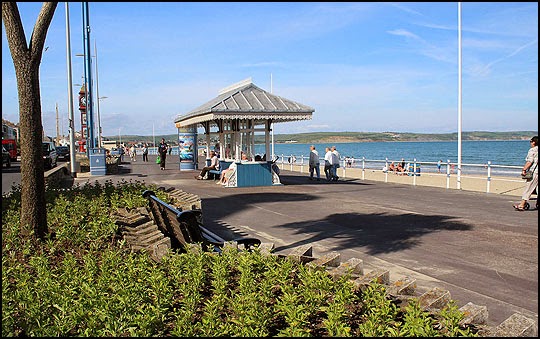 A beach cafe with a curved roof was having the roof washed clean by mops wielded carefully by three chaps in their twenties, at least one of whom did not look too comfortable with standing on the roof...

Apart from this one cafe, we struggled to find a cafe selling food and it did make me reflect a little on how times have changed from the seaside trips of my youth. Seaside towns were filled with cafes in those days of the 1950s through to the 1970s which stayed open to serve evening meals. Now, like any high street you might care to name in England, the cafes close at 4:30 or 5:00pm and if you are not served a meal in your hotel then there is little choice but for a full-blown restaurant (which are rare on high streets anyway) or a pub meal.

I really miss those small cafes with their Pyrex cups and saucers and the steam injectors for making what we used to call "frothy coffee". They filled the gap between fish and chips dining rooms and roast beef/lamb/chicken restaurants. You could have fish or pies from the one or roasts from the other but you could also have any combination of sausage, egg, beans, fish fingers, chips, mash etc. None of that appeared on a special children's menu. Adults were allowed to eat it if they wanted. If you wanted a small portion for a child you asked for it and it was no problem.

And best of all, they had jukeboxes where you could play your favourite record for 3d, three songs for 6d or a giddy five records for a shilling (1¼p, 2½p and 5p respectively)

Thursday 26 June 2014. Hometime, by gad! We have breakfast and say farewell to Seaton, the Bay Tree House B&B and David and Sue, our hosts. I had it in mind to wend our way up through the Cotswolds after a first stop at somewhere I'd wanted to visit for some time. 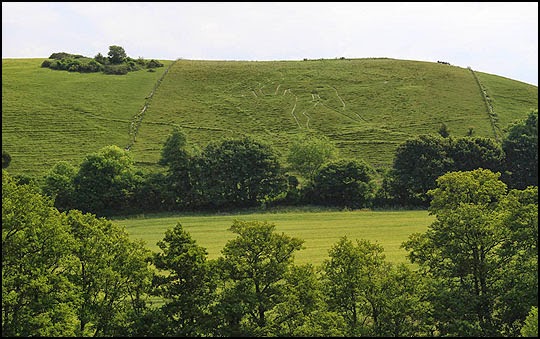 I'd put on the SatNav to get us to Cerne Abbas. What a roller coaster of a ride that was! Almost as exciting as the bus journey from Beer the other day! At one point I drove through a river by a ford! No... not a Focus, but an actual ford - the road giving way to a few cobbles that made up that part of the river bed whilst the water splashed against the wheels and exhaust. I remembered that old public information film where the Hillman Minx ended up in a ditch after driving through a ford and I dried my brakes as recommended, causing Fran to say anxiously "Is something wrong?" as we slammed to a halt... 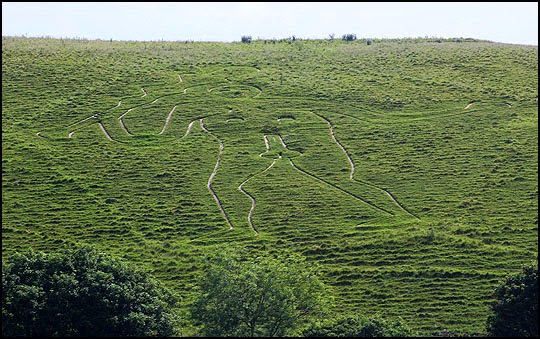 Anyway! The Cerne Abbas Giant! First references to it appear to be from the 1690s. As with many of our chalk cut figures, it can't be seen properly unless you fly above it. Makes you wonder a bit when you know it was built when men could only dream of flying above it with hundreds of years to pass before any of them would. Makes you wonder even more with things like the Uffington white horse which can hardly be seen at all from the ground and that is 3,000 years old!

Well, we didn't have an aeroplane handy so ten minutes was time enough. I set the SatNav for Cirencester and of course it took us straight back across to Taunton and the M5... I suggested we head up the A38 instead which should let us get to the Midlands before having to go on the motorway. Unfortunately just before Bristol the A38 was closed by a police car sitting across it, by which I inferred there was a serious accident blocking it somewhere close and after a very long detour we ended up on a very crowded motorway for the rest of the trip home.

Suffice it to say that progress was so slow that we drove onto Charnock Richard services for our tea. Usually those services are only 45 minutes from home. But it had reached 8:00pm and we are both diabetic and were needing to eat. And that is it. Another Burke trip brought to an end. I hope you've enjoyed these few articles - the weather this week was very kind to us and I think the photographs mainly reflect that too. Lovely deep blue skies, brought out by my use of a polarising filter on the camera.