Tuesday 24 June 2014. What could be better than a beer in Devon? Right! Beer in Devon. It's a fishing village. The name derives from the Saxon word bearu meaning "grove" and refers to the forest on the hills each side of the village. They do sell the drink here and there in the village though... 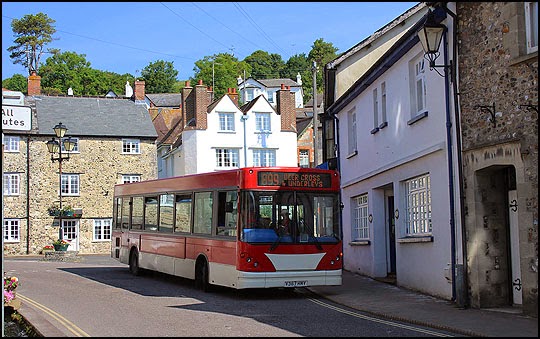 The car was parked near the B&B and we had gotten into the last remaining space so we decided to leave it where it was and get a bus from the Promenade a hundred yards walk away.

This dropped us off without incident at Beer Cross which is halfway up a long and at times steep hill that goes down to the beach in one direction and up to an attraction called Pecorama, which has gardens and model trains from toy scales up to ride-on sizes. With reluctance I followed Fran down the hill... 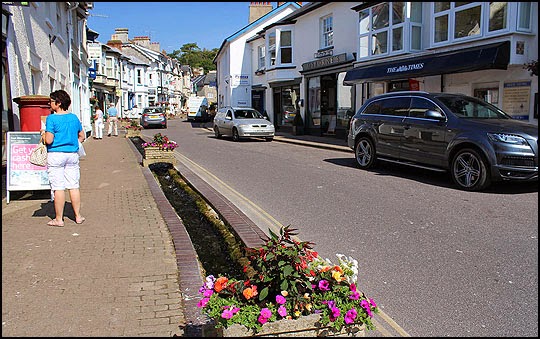 Beer Brook flows through the village in a culvert. Fed by three springs, it originally just flowed sluggishly over the cobbles, but the locals used to sit outside their cottages gutting fish and throwing the guts into the stream. The smell upset the local manor lord's wife who ordered the culvert to be cut and diverted the water into it where it flowed much faster and took the fish guts (and the smell) away. 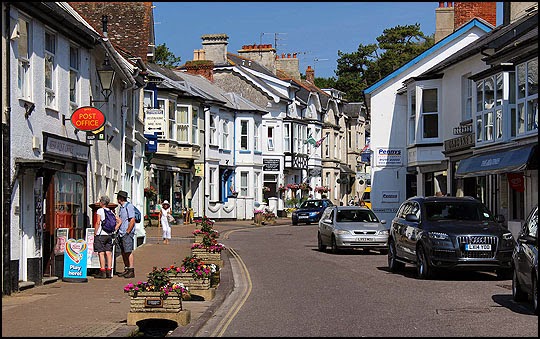 It is now such an attractive feature of the village that you wish your own town (for almost every town has underground streams that once were open) had done the same. Even better, the locals don't throw fish guts about any more either! 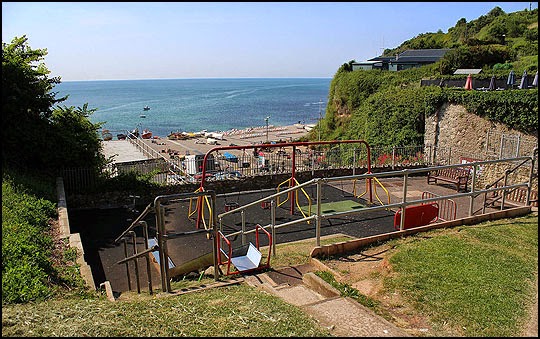 At the end of the street the land drops steeply to the beach, creating headlands on both sides of the beach approach. On the eastern side is a small playground and garden. 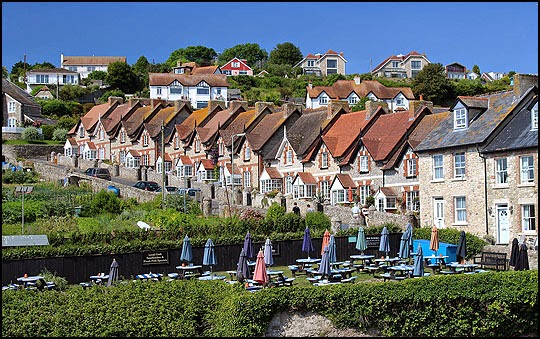 Looking across the street from the playground there is a row of cottages, climbing up the hill to the west. Chalk limestone was mined locally, from as early as Roman times and then right through to the 1920s. Beer stone can be found in Exeter Cathedral, Westminster Abbey and St Paul's Cathedral, in London, as well as in the Tower of London. It is said that the stone was used in 26 English cathedrals altogether. Many of the local buildings are faced with flint from the cliffs. 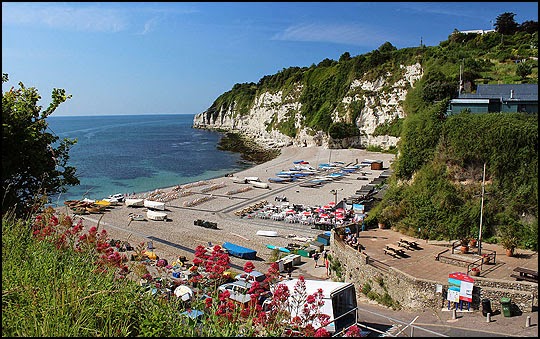 On the western side on the edge of the beach with the street is a flagstaff and a small seating area, underneath which is a very well-disguised World War Two pillbox. One machine gun slit is visible from the corner of the beach and road. On the beach there are three snack bars and numerous working fishing boats and boats for hire for your own fishing or for pleasure. I've been fishing in my past and it wasn't a great deal of pleasure to be honest... 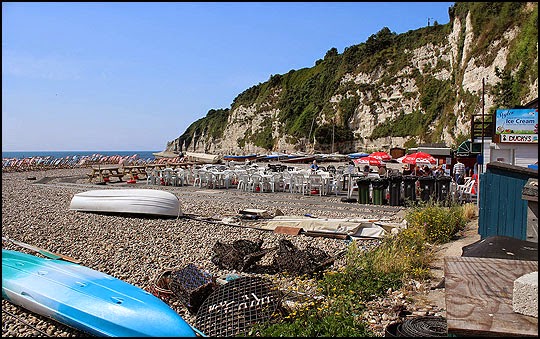 The beach is very steep close to the sea. Boats are launched off the beach and are winched back up the pebbles on return. With the electrical winches near the cliff and roadway this means that the beach hides a series of chains that lead down towards the sea. Despite notices we saw one man trip and fall headlong over one of them. To make it easier to walk on the beach, long strips of rubber - re-cycled conveyor belts - have been laid over the pebbles. 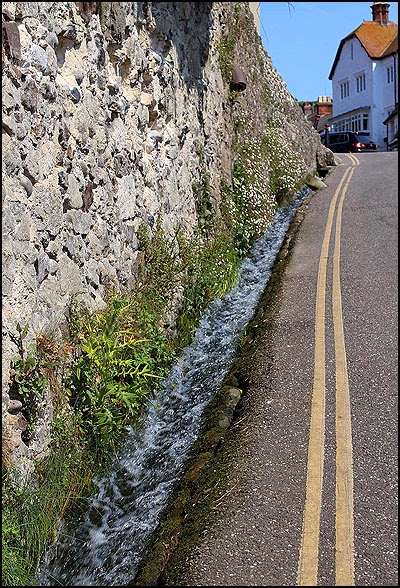 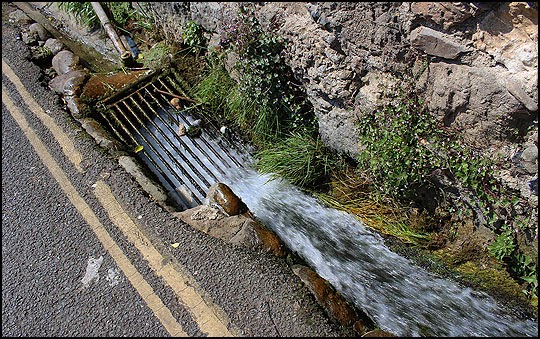 Beer Brook, very fast flowing on the final slope to the beach, finally disappears down a grating and I presume is either piped down to a lower level through the pebbles to the sea or diverted for some other use.

We got ice creams from Ducky's beach snack bar and took them onto the seating area over the pillbox to sit and enjoy the view of people falling over winch chains. 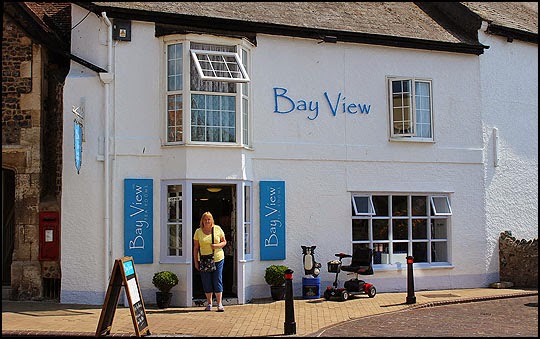 Then after another spell of sitting we ventured into the Bay View tea rooms for a strawberry milk shake! 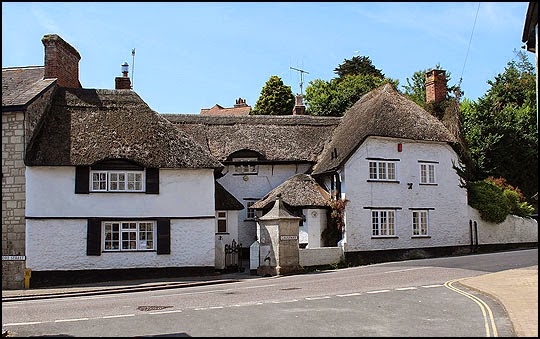 We made our way back up the hill to Beer Cross, intending to get on a bus back to Seaton to spend the afternoon on Seaton's tramway. However a bus bound for Sidmouth turned up and impulsively we jumped onto that. What a great choice! This, a full size single deck bus like the one in the first photo, went via some tiny leafy country lanes, no wider than the bus itself. For much of the journey the hedges were scraping down both sides of the bus at the same time! It was full of ladies who all seemed to know each other and who, when we screeched to a halt on a blind corner because a van was coming the other way, all said to each other "Well! That was close!" in an amused we-expect-one-of-these-every-trip kind of way... At some point the bus made what seemed to be an unscheduled stop next to a pub and all the ladies got off for a booze-up, or possibly lunch, or more likely both...

Will we make it to Sidmouth? Will we ever get to go on the Seaton trams? All will be revealed in the next thrilling instalment!