Monday 23 June 2014. After the delights of Sidmouth we arrive at Seaton to book into our Bed & Breakfast guest house. Then we went out to find something to eat. This wasn't too successful. We tried a pub with a beer garden and a very nice conservatory restaurant but - well, let's just say that perhaps the chef had been told to cook chips twice and thought that meant cook from start to finish the first time and then cremate them the second time. Crispy shells with nothing inside do not a good chip make... I won't be "holding court" there again... And steak in ale pie should be made with shortcrust - not sweet - pastry! 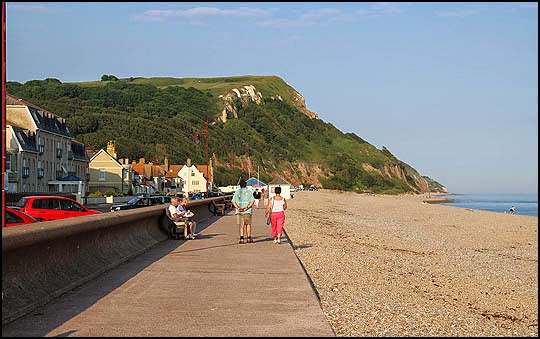 Seaton's promenade and beach were very reminiscent of Sidmouth. There was little or nothing by way of entertainment and very few people out and about. I saw a solitary turd lying on the beach, probably an irresponsible dog owner - more probably the dog... I felt a little as if people would flock to view it if I told someone...

Like Sidmouth, Seaton occupies the space between two sets of cliffs. We are looking east here towards Haven Cliff. You are not being decived - the cliffs are red at the bottom and have a layer of chalk at the top! The buildings towards this end of town tend to be houses rather than hotels. 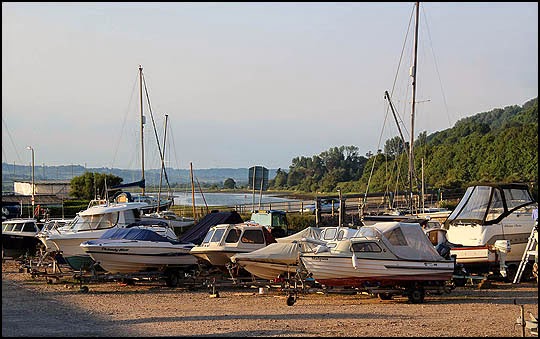 Also like Sidmouth, at the eastern end of the gap between cliffs a river runs down to the sea. In this case it is the river Axe, but the name Axmouth has been claimed by the town on the other side of the river. It was once one of the major ports of the south east. The river mouth until the 14th century was half a mile wide but then half of Haven Cliff fell away and all but blocked the river mouth. Together with tidal drift dumping shingle from the west faster than locals could dig it away to protect the deep water entrance, the river mouth became totally blocked. Silt coming down the river instead of being washed out to sea, started to form the salt marshes that exist now between Seaton and Colyford. Before long, ships found it difficult to reach even to Axmouth, a mere mile inland. 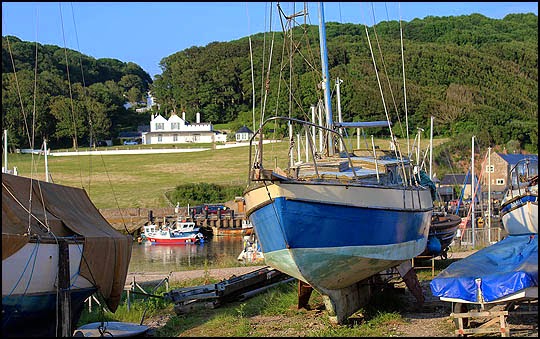 There are Roman remains here, though they lie under the ground, deliberately buried to preserve them. The Romans recognised the importance of Seaton as a port. Later it contributed both ships and men for King Edward I when he went to war against both Scotland and France. 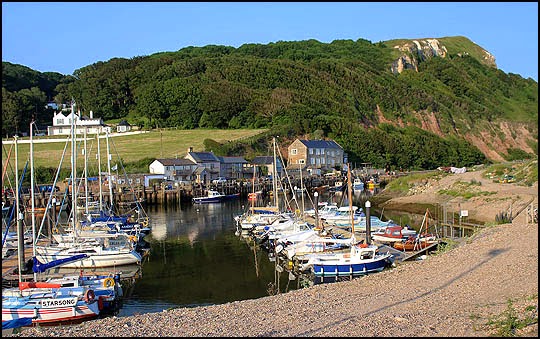 In more recent times the bend in the river to take it around Haven Cliff and into the sea a little further east has created this glorious view from the western side. The Axe Yacht Club sits on this corner from where I took the photo and (rather churlishly I thought) have erected a sign saying "Members only past this point". I would have thought a sign saying "If you are stupid enough to trip over a mooring cable or fall in the river, don't come blaming us..." would have been better. But probably some equally stupid judge would award damages and reinforce the idea that people shouldn't have to take responsibility for their own stupidity... 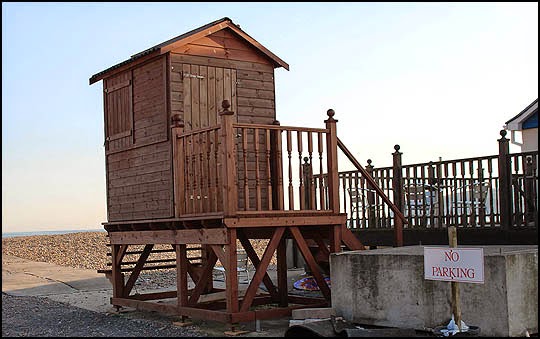 I have very little to say about this rather strange little building as I've no idea what function it fulfils. But it did catch my eye as a candidate for the best "Loo with a view"! 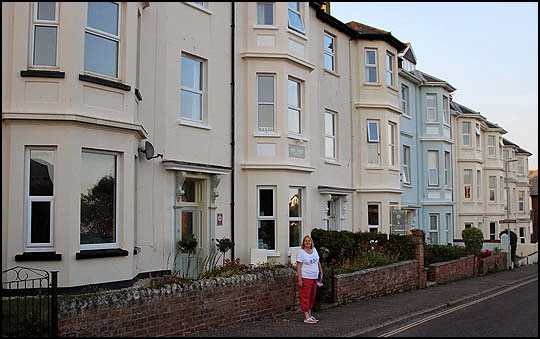 We walked back down the Promenade past groups of people staring downwards and poking the shingle with sticks. We arrived back at our guest house to find the owners, hurrying out with binoculars and a metal detector. "Quick! he said excitedly, "there's a turd! There's a turd!"

Of course I made that up... Our hosts at Bay Tree House were David and Sue and were absolutely wonderful. The place was spotlessly clean and had everything we could have wanted from a B&B, including some of the tastiest bacon I've tasted in a while! Our room is two floors up, with the open bay window. 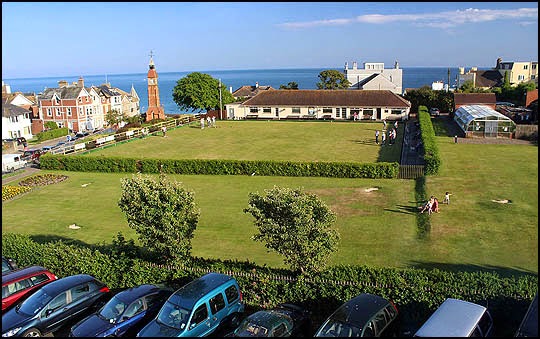 And this is the view from it!