A few days ago I showed the folks of 1982 Blackpool sitting it out in deckchairs on the Promenade whilst the tide was in. The very minute the tide turned and a strip of sand appeared, people were up and laying claim to their patch for the rest of the afternoon. 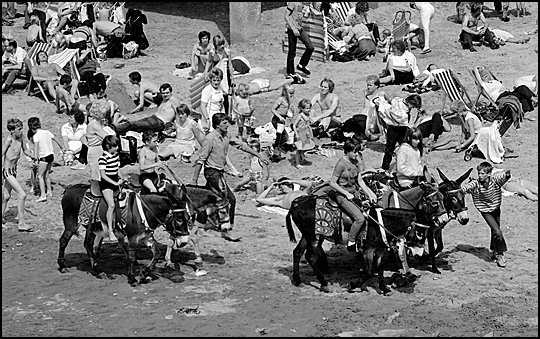 The traders were not far behind. Here the donkey ride has reached it's halfway point - the young lad is pushing to turn the lead donkeys around for the run back to their starting point. They are reluctant because the sand is still wet from the tide in the foreground. 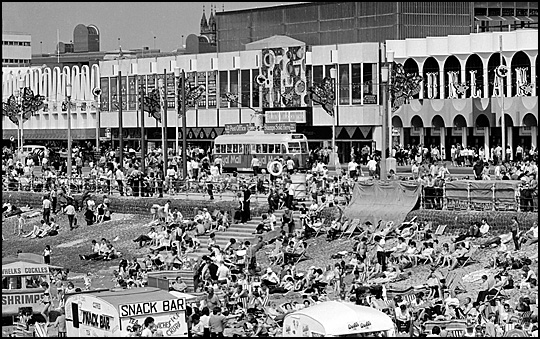 Even before the majority of people have left the safety of the sloping sea wall, the caravans selling shrimps, whelks, cockles, crisps and ice cream are jostling for a position on the narrow strip of sand.

In the background are the Funland and Mr B's (later Mr Bee's) arcades as we are on Central Beach here on the Golden Mile. The Royal Mail tram trundles past. It had a counter for selling stamps - one of the more innovative or barmy of Blackpool ideas depending on your viewpoint! 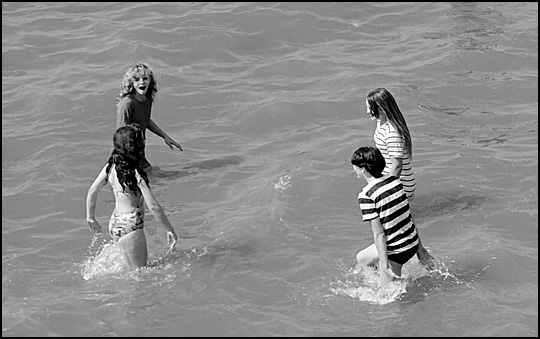 The closeness of the sea to the sea wall is never an irritation for those whose idea of fun is to play in the sea anyway. However a retreating tide has to be treated with respect and caution even on as shallow a sloping beach as Blackpool's! Nobody came to any harm at least on this sunny July day in 1982. 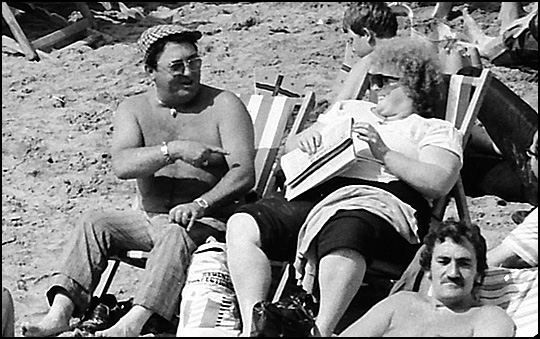 Blackpool has always been the place for fun and good-natured humour and it is written large across the faces of this pair here, who I spotted for the first time yesterday as I scanned the original negative, 29 years after taking it! They were right in the very bottom corner of the photo and I've enlarged this enormously to zoom in on this happy couple enjoying the fun of a Blackpool day out.

Return to Blackpool Promenade and Beach Index Page
Posted by John Burke at 10:03