Old negatives are still going through the scanner, although there's been a few more personal ones and others that don't hold a lot of interest for anyone other than me. However, I'm coming to another lot of Blackpool photos just at the moment so I'll start off with a couple of them here. 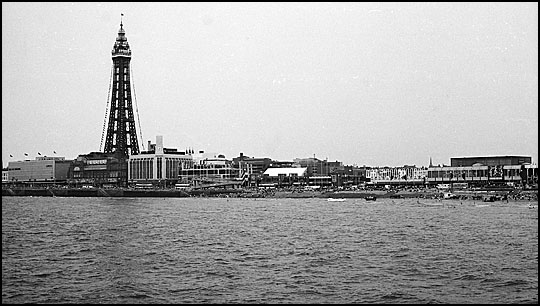 I'm now up to July 1982 and the two scenes today were taken on the 11th of July of that year. This one was taken from the end of the Central Pier at high tide and includes Lewis's and Woolworth's stores flanking the Tower. Lewis's was destined for closure and demolition and Woolworths vacated their building and moved into a brand new building on the Lewis's site. The old Woolworth building was turned into an indoor market - probably the only sure-fire way to make money for the building's owners as the stallholders have to pay rent whether or not they make any profit...

The Promenade footbridge crosses the road a little further south. I used to like that as a viewpoint for taking photos of trams and the illuminations, but that too was demolished in 2010 in preparation for the new Promenade and sea defence works. The 1980s also saw the last of the pleasure trip boats operating from the slade. Passengers were taken out to them on the backs of a couple of ancient World War II vintage lorries which by this time I suspect were getting hard to keep in running order. Not only were they old, but they were used exclusively within a few yards of the sea and the salt damage to the engines alone must have caused problems for the operators! 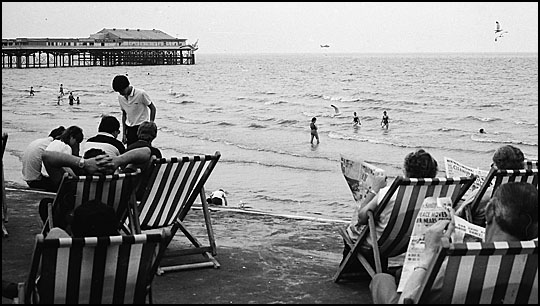 At high tide thousands of deck chairs had to come off the beach. Around the slade, up to a hundred chairs were set up and holidaymakers relaxed there, looking out to sea or reading or simply going to sleep. Here a helicopter is hovering over the sea on the horizon, yet virtually no one is even aware of the possible drama being enacted out to sea. Instead people are concentrating on their newspapers, which report the concluding chapters to the Falklands War of that year. That day the requisitioned P&O cruise ship Canberra would arrive back at Southampton, carrying Commandos back from the conflict.

Return to Blackpool Promenade and Beach Index Page
Posted by John Burke at 08:39