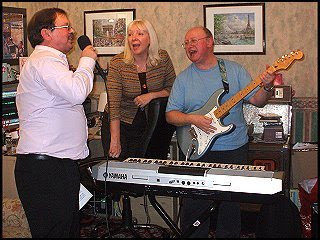 David's wife Jeannie joins us for a bit of help on the chorus of Be My Baby. Which is a good thing because my falsetto is not was it used to be...

We were round at our house last night for another run through of the new stuff and to see if we can revive a couple of numbers that have fallen by the wayside a bit. A good time was had by all, helped by Fran's cubed chicken in white wine and garlic which was just a bit yummy!

At the same time though we've had a gig called off this weekend so are going to console ourselves with a trip out to Frankie & Bennie's!
Posted by John Burke at 07:44